The castle of Sedan is home to a museum that commemorates the war of 1870, in particular a fresco of the battle of Sedan.

Located on the edge of the Ardenne forest alongside the Meuse a few kilometres from the Belgian border, the 35 000 m2 château fort of Sedan is the largest feudal château in Europe. Built from 1424 by Evrard de La Marck, it was constantly expanded, reinforced and modernised, bearing witness to four centuries of evolution in military architecture.

Now classified as a historical monument, the fortress is a reminder of the past glories of the city of Sedan over which the powerful La Marck family, sovereign princes of Sedan and dukes of Bouillon ruled for close to two centuries. From 1591, the area then came under the rule of La Tour d'Auvergne. The area lost its independence in 1642, when the birthplace of Turenne again come under the rule of the French monarch following political manoeuvring by Prince Frédéric-Maurice of La Tour d'Auvergne against the cardinal of Richelieu. The whole history of the Sedan is now on display at the Historium of the château, through a visitors' circuit marked with depictions of life in Sedan in medieval and modern times.

The term Sedan, however, remains associated with a defeat which took place on 1 September 1870. The main consequence of this defeat was the abdication of Napoleon III and the fall of the Second Empire. This event, which is still very much present in the collective psyche, merits further explanation. To explain this event, one should reject the idea that Sedan would be the logical outcome of the coup d'etat orchestrated by Louis Napoleon Bonaparte on 2 December 1851. This official reading of events during the Second Empire, developped under the Third Republic, is no longer widely-held; rather than a military defeat, Sedan is more « the ultimate failure of a foreign policy that proved catastrophic», to quote historian Jean-Michel GAILLARD, who with Anthony ROWLEY wrote «Histoire de l'Europe».
An ambitious policy implemented by Napoleon III, based on a rejection of the European order established at the Congress of Vienna of 1815 and respect for the principle of nationalities. It was for these reasons that France would go to war against Austria-Hungary in May 1859, thus lending its support to the Piémont kingdom, which sought to unify Italy. This campaign, which was marked by the French victories in Magenta (4 June) and Solferino (24 June), resulted in the Treaty of Zurich of November 1859. This treaty allowed the Piémont to acquire Lombardy. France, for its part, acquired Nice and Savoie in March 1860.
It was again in the name of the question of nationalities that 6 years later, Napoleon III would show benevolent neutrality towards Prussia when the latter attacked the Hapsburg Empire. The consequences of this confrontation were to prove important. Annihilated at Sadowa on 3 July 1866, the Austro-Hungarian Empire was driven out of Germany, thus allowing Prussia to create, together with Saxony and 21 small states, a powerful «Northern German Confederation», the first step towards German unification. Italy, which was also at war with the Hapsburgs, acquired Venice, thus strenghtening its unity.
Above all, this war brought to an end the order established in Vienna in 1815, a situation which appeared to favour France. In fact, these conflicts would end up diplomatically isolating the Second Empire from its European neighbours; Russia, defeated by Napoleon III in the Crimean War (1864-1866), Austria-Hungary and Great Britain were concerned at these new Napoleonic conquests. As a result, France would act alone when on 19 July 1870, Napoleon III would begin a final war against Prussia, a war sought by a Bismarck anxious to complete the unification of Germany. Less than two months later, France would be defeated.

Nowadays, the community of villages in the Sedan has decided to highlight this memory, dramatic as it is. To this end, a study has been launched to determine the feasibility of building a memorial centre in Sedan, centred primarily on the theme of the war of 1870 but also containing references to World Wars I and II. In addition, this venue would also enable the creation of a network for the main memorial sites in the Sedan, such as the home of the last cartouche in Bazeilles and the numerous monuments to the Franco-Prussian war of 1870 in Floing. Until this project is completed, it is still possible to enter the section of the château dedicated to the war of 1870 and see the «Panorama de Sedan» by Louis BRAUN, a canvas 11 metres 30 cm wide and 1 metre 57 centimentres tall depicting the battle of 1 September 1870.

and 13h30 to 16h30 on weekends. Closed Mondays except during school holidays

Closed 25 December and 1 January - Open all year round for group visits, subject to reservation The National Memorial of Les Spahis in La Horgne
Ardennes 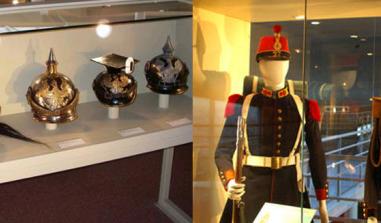 Museum of War and Peace in the Ardennes
Ardennes