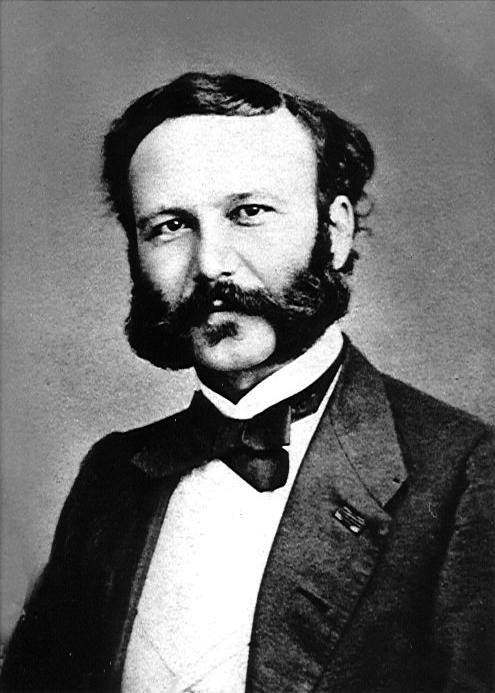 In 1859, a young Swiss man named Henry Dunant discovered the horrors of war on the battlefield of Solferino, Italy. He decided to create an international organisation to help people injured in conflicts.

The Red Cross was born.

Born in Geneva on 8 May 1828, Henry Dunant was the son of a very pious and charitable Calvinist family. He dropped out of secondary school and took up an apprenticeship at a Geneva bank. He became involved in social action and dedicated part of his time visiting prisoners and helping the poor.

In 1853, he went to Algeria to head a Swiss colony in Sétif. He sought to build a flour mill, but as he could not get a concession for the land he needed for it to operate, he went to Paris to meet with Napoléon III. But he was leading the Franco-Sardinian troops fighting against the Austrians in northern Italy. Dunant went there to see the Emperor. On 24 June 1859, the day of the battle, he arrived at Castiglione, in Lombardy, a small town near the site of the fighting. The next day he discovered the Solferino battlefield. "At every step, anyone who visited this immense theatre of the fighting the day before saw, in the unprecedented confusion, inexpressible despair and all kinds of misery ". Faced with so much suffering, Dunant took control of the organisation of assistance and managed to ensure that Austrian prisoners would be treated the same way as other soldiers. He also made sure that the Austrian doctors who had been taken prisoner were able to treat the wounded.

Back in Geneva, he wrote Un souvenir de Solferino (A Memory of Solferino, 1862) in which he described the battle and laid out his ideas for improving the fate of wounded soldiers. "Isn’t there a way to set up emergency relief societies whose purpose would be to provide care to the wounded in wartime by impassioned, dedicated, well-qualified volunteers?"

On 17 February 1863, Dunant created a permanent international committee for caring for wounded soldiers which, in 1875, took on the name of the International Committee of the Red Cross (ICRC). On 26 October 1863, some fifteen countries took part in the international conference of Geneva that was the Red Cross’s real founding act. Supported by Napoléon III, the committee, for which Dunant was a member and secretary, prepared the Geneva Convention signed by fifteen countries in 1864.

Dunant was now famous and was received by many Heads of State. But his financial affairs were in poor condition – he declared bankruptcy in 1867. Ruined, deep in debt, he had to resign from his position at the International Committee. In Paris, he was reduced to sleeping on park benches. But Empress Eugénie called him to the Tuileries Palace to get his opinion on extending the Geneva Convention to war at sea. Dunant was then named an honorary member of the National Red Cross Societies of Austria, the Netherlands, Sweden, Prussia and Spain.

During the Franco-Prussian War of 1870, he visited the wounded soldiers brought back to Paris and introduced the use of identification tags, or “dog tags”, to be able to identify the dead.

When peace returned, Dunant went to London where he tried to organise a diplomatic conference to rule on the fate of war prisoners; the Czar encouraged him, but England was hostile to the project. On 1 February 1875, at his initiative, an international conference for "the complete and definitive abolition of the trafficking of negroes and the slave trade" opened in London.

The following years were a time of wandering and poverty: Dunant travelled by foot to Alsace, Germany and Italy; he lived off the charity and hospitality of a few friends. Finally, in 1887, he found himself in a small Swiss town overlooking Lake Constance: Heiden.

Ill, he took refuge at the hospice and that is where a journalist found him in 1895 and wrote an article published in the press throughout Europe a few days later. Dunant suddenly became famous and received honours. He received the first Nobel Peace Prize in 1901. He died on 30 October 1910.