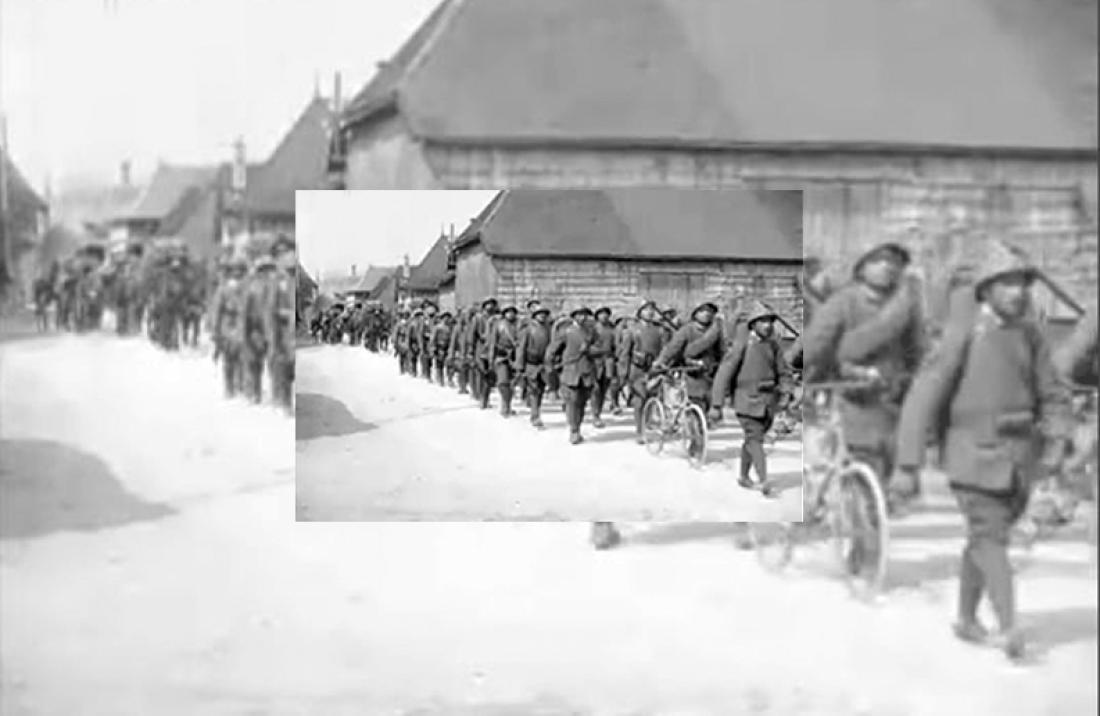 General Albricci’s Italian units cross the village of Lhuître, in the Aube, on their way to the front, 23 April 1918.
Corps 1

When war broke out in summer 1914, Italian volunteers enlisted to serve in the French Army. They formed a regiment of the Foreign Legion, nicknamed the “Garibaldi Regiment” in honour of the Italian independence hero who fought alongside the French in the Franco-Prussian War. Six of his grandsons were among those who enlisted in the unit, two of whom were killed in the fighting. The regiment was dissolved in spring 1915.

In accordance with the Treaty of London, signed on 23 April 1915, Italy declared war on Austria-Hungary on 23 May 1915, and on Germany on 23 August 1916. In their theatres of operations, the Italians fought in the Dolomites, Friuli, Piave, Isonzo and the Asiago plateau. They were commanded by generalissimos Cadorna then Diaz. In the Adriatic, the Italian Royal Navy faced the Austrian fleet. 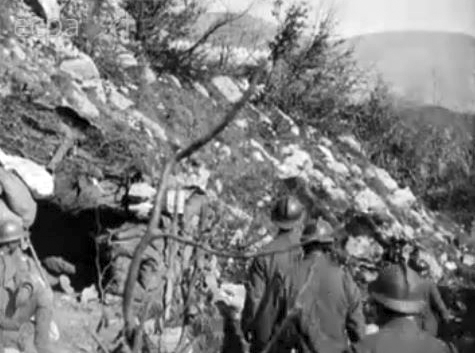 On 24 October 1917, the central empires broke through the Italian Front at Caporetto. Their advance was not checked until mid-November, in Piave, where Franco-British reinforcements soon arrived. On 6 and 7 November 1917, Italian prime minister Orlando and foreign minister Sonnino met with British prime minister Lloyd George and French prime minister Painlevé, along with generals Porro, Robertson and Foch, for a conference in Rapallo, in an attempt to unify the Allied command and strategy. The following day, a pact signed in the presence of King Victor Emmanuel III established a Supreme War Council, assisted by a military committee comprised of generals Diaz, Wilson and Foch, tasked with resolving urgent issues. 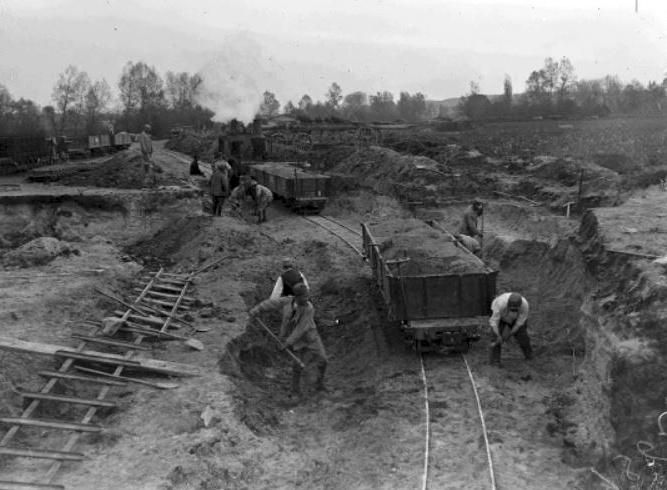 In 1918, at the height of the German offensives, Italy honoured its agreements with its allies: in response to a crucial need for troops on the Western Front, it sent nearly 41 000 men and thousands of military auxiliary company workers to France. On 10 April, the 2nd Italian Army Corps (2nd IAC) was taken by train to France. Commanded by General Albricci, it comprised the 3rd and 8th Infantry Divisions (infantry brigades of Naples, Salerno, Brescia and the Alps, together with cavalry, engineers, service and artillery units). The Italian base was in Lyon, with a rear depot in Miramas, near Marseille.

The 2nd IAC arrived in the Mailly-le-Camp area of Champagne on 25 April, where they were reviewed in early May by General di Robilant, Italian military representative on the Supreme War Council and commander of the Italian forces in France. 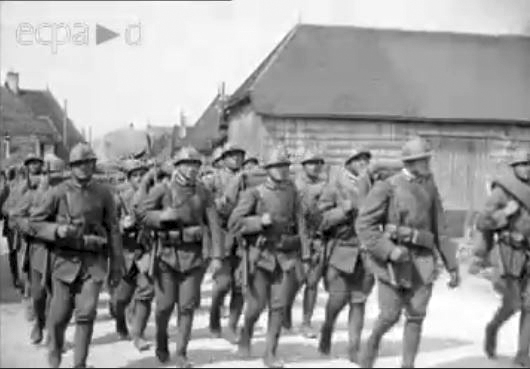 General Albricci’s Italian units cross the village of Lhuître, in the Aube, on their way to the front, 23 April 1918. © ECPAD

On 4 May, a conference held at the French general headquarters (GQG), in Provins, between General Pétain and the Italian generals, determined that the 2nd IAC, after a period spent in a quiet sector of the front, would be engaged in the fighting at the end of the month.

On 12 May, the 3rd Infantry Division assembled at Givry-en-Argonne, in the French Second Army’s zone. After three days’ march to the line, on the 16th it took up position in the Aire sector and on the Butte de Vauquois hillside.

The winter campaign on the Italian front, in the Alps. Italian troops arrive in France, 3-4 May 1918. © ECPAD

Patrol operations, sometimes resulting in hand-to-hand fighting, were conducted all along the Buanthe river, in the Cheppy woods and around Avocourt. On 30 May, the 3rd Infantry Division was relieved by the 8th, which went on harassing the Germans. Relieved by the French, the 2nd IAC moved to Champagne, to fight southwest of Reims with the French Fifth Army. 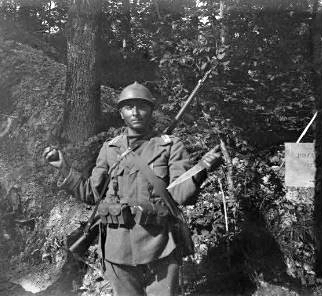 A trench clearer in the forest of Hesse, Meuse, Italian sector, 21 May 1918.
© ECPAD/Maurice Boulay

Corporal Riccardo Martini, of the Alpine Brigade, was the first soldier to die for Italy on French soil. In the Marne, General Berthelot, commander of the Fifth Army, reviewed the Italian troops and congratulated generals Albricci, Pittaluga and Beruto.

The operations in Champagne and the Aisne

When the Italians entered the fray, the Second Battle of the Marne had been under way since 27 May in dramatic conditions: the Germans had reached the Marne, dispersing the French Sixth Army. In order to take the Reims salient, defended by colonials – marsouins and Senegalese – and African troops of the 45th Infantry Division, the German 1st and 7th Armies carried out violent attacks in the Ardre valley against Montagne de Reims. The Italians thus inherited a pivotal sector of the French front. The 2nd IAC established its headquarters in Romery, and its two divisions were given the mission of defending the front between Saint-Euphraise-et-Clairizet, Bligny, Chambrecy and Champlat-et-Boujacourt.

On 23 June, the Italians were driven back by an enemy offensive on Montagne de Bligny, but managed to counter-attack. On 15-16 July, four German infantry divisions pushed the Italians back four miles. Losing a number of villages, the Italians resisted fiercely, before counter-attacking on 18 July. From 23 July to 1 August, the Allies fought without let-up to drive the enemy from Montagne de Reims, suffering heavy losses in the process. 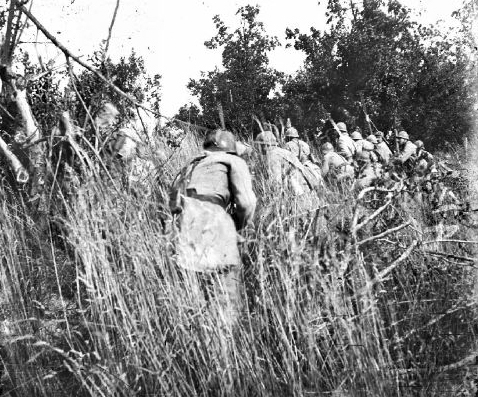 An infantry company launches an attack, near Reims, 20 July 1918. © ECPAD/Daniau

After being relieved, the Italians re-formed behind the front line, where they were visited by Clemenceau, who congratulated them on their heroism. At a ceremony in Champagne on 26 August, President Poincaré, having reviewed the Italian troops, decorated those officers and soldiers who had distinguished themselves in the fighting at Montagne de Reims.

After recovering, the 2nd IAC returned to the front to join the French Fifth Army. By 22 September, the Italians were in line along the Aisne, at the foot of the Chemin des Dames. On the 30th, they attacked and took the hills above Chavonne. On 1 October, they pushed along the canal and took the ruined village of Soupir, only to be trapped in the Braye ravine from the 4th to the 10th, where they suffered heavy losses.

The French official communiqué of 11 pm on 11 October paid tribute to them: “On the Chemin des Dames, the Italian troops acting in conjunction with ours held brilliantly onto their advantage despite the resistance they faced. They occupied Vendresse, Courteçon, Troyon and Cerny-en-Laonnois.”

On the 13th, the Italians came down from the ridges and crossed the Ailette river. On the 15th, they participated in the taking of Sissonne. Finally, on 7 November, they took the village of Thuel, near Montcornet.