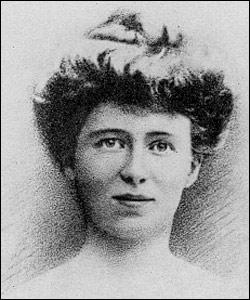 Louise, the "Joan of Arc of the North", was the daughter of Julienne Mabille de Ponchevillle and Henri de Bettignies, an old Walloon noble family from Hainaut which established imperial and royal earthenware manufacturing in Tournai in the XVIII century. Her great-grandfather, Louis-Maximilien, opened a china shop at the "Moulin des Loups" in Saint-Amand-les-Eaux. Due to financial difficulties, Henri de Bettignies sold the business shortly before his daughter was born. Despite being penniless, the young girl was taught the values and given the education of her peers. She completed her secondary education in Valenciennes, finding in education an escape from her poverty and the death of her father in 1903. Following in the footsteps of her priest and sister, she then went to Carmel before using her intellectual abilities to become a housekeeper to English and German families, so as to learn their languages and discover Europe. In 1914, German troops invaded the north of France. In October, Louise, together with her sister, participated in the defence of Béthune, providing the besieged with fresh supplies.

During a visit to Saint-Omer in February 1915, the young woman was contacted by a French officer from the 2nd Bureau, who suggested to her that she serve her country as an intelligence agent. This proposition was again put to her shortly thereafter, but on behalf of the British intelligence service, by Major Kirke. After receiving the consent of her spiritual adviser, father Boulengé, who nicknamed her "Joan of Arc of the North", she put in place, in the Lille sector, and under the guidance of the duke of Charost, the bishop of Lille, the foundations for the future "Service Alice" or "Service Ramble". Travelling through Belgium and the Netherlands, the now Alice Dubois passed on information to Great Britain. From the spring of 1915, she was assisted in her duties by Roubaisienne Marie-Léonie Vanhoutte, alias Charlotte Lameron. Ms Vanhoutte, who had worked on the installation of ambulances since August 1914, used her status to procure information. She used her trips to Bouchaute-Gand-Roubaix, where she would pass on news to families of soldiers and deliver mail, to inform the English of troop movements and strategic locations. The Alice network had eighty people, and was so effective that information was collected and transmitted within twenty-four hours. It consisted of two divisions. The first kept an eye on the Belgian border and the movements of German troops. As such, it was made up of observers and couriers placed at strategic locations: level crossing-keepers, station masters and local members of the Resistance, such as Mr. Sion and Mr. Lenfant, the police commissioner of Tourcoing. The second division was made up of people who lived in the region of Lille, Frelingues, Hellemmes, Santes and Mouscron who could justify frequent movement to the occupying authorities. These people, who included Comboin a.k.a. José Biernan, Madeleine Basteins, Mrs. Semichon, Mrs. Paul Bernard, Mrs. de Vaugirard, Victor Viaene and Alphonse Verstapen, provided information on sensitive areas (artillery battery areas, storage areas, TSF posts, etc.) and occasionally served as couriers. The team was complemented by a chemical laboratory provided by Mr. and Mrs. Geyter which was used to reproduce maps, plans and photographs. Information gleaned was retranscribed on thin sheets of Japanese paper and transported to the Netherlands mainly by Louise de Bettignies and Marie-Léonie Vanhoutte, mainly on foot, between Gand and Bruxelles, then Beerse.

From May 1915, Alice Dubois worked sporadically with the 2nd Bureau of Commander Walner under the pseudonym Pauline. Through her actions, the Allies were able to wipe out two thousand pieces of artillery at the battles of Carency and Loos-en-Gohelle. In the summer of 1915, a new information network was put in place in the sector of Cambrai-Valenciennes, Saint-Quentin and Mézières. In autumn 1915, it provided information on preparations for an attack on Verdun. After creation and administration, Louise de Bettignies had to withstand a counter-offensive by the German intelligence services. Moreover, Alice and Charlotte felt they were being followed. After a meeting at Lion Belge (Brussels), Marie-Léonie Vanhoutte was arrested at the boarding house of the Adriatiques on 24 September 1915 and incarcerated at Saint-Gilles prison. The circumstances surrounding her arrest are vague. At first, Charlotte was asked, at the insistence of Messrs Lenfant and Sion, to return to Brussles to deliver a letter. She then missed the planned rendez-vous, but became aware of two postcards addressed to her at the boarding house. One was from Alice while the other, from a person called Alexandre, contained a message which read as follows: "Come as soon as possible, tonight or tommorow, around 8h to Lion Belge. Paper in hand; it is about Alice". The German police follow her, without success, in the streets of Brussels and ask her to identify Louise de Bettignies from a photograph. Louise, at that time in England, returned to France to direct operations.

She was arrested in Tournai on 20 October, as she attempted to cross the Franco-Belgian border using false identification documents. Her driver, Georges de Saever, suffered a similar fate. The German authorities then organised a confrontation and search and the Geyter residence. On the ground, British intelligence services, dependent on the information collected by the Alice network, continued their activities in the organisation of "La Dame Blanche", which was led by the Tendel women. Louise was reunited with her friend at Saint-Gilles prison from 26 October, where they communicated by tapping on the pipes. The sentence was handed down by judge Goldschmidt. During six months of questioning, Louise de Bettignies never wavered: "like a fox in its hole, she never showed signs of faltering, saying little and denying everything". Unable to establish with certainty the relationship between Louise de Bettignies and Alice Dubois, the Germans used stratagems to collect numerous pieces of information to support their case. It was in this way that Louise Letellier, a "compatriot" also apparently subject to questioning, ended up obtaining a confession from Louise de Bettignies and five letters. With the first phase of his plan complete, judge Goldschmidt used the information contained in the letters to try to convince Marie-Léonie Vanhoutte to betray her companion, but in vain. On 16 March 1916, the German war council based in Brussels, which included General Von Bissing and war advisor Stoëber, sentenced Louise de Bettignies to death for espionage without being able to prove that she was the head of the network. Her sentence was commuted to life imprisonment, probably due to the notoriety of the de Bettignies family. Marie-Léonie Vanhoutte and Georges, initially sentenced to death, were given fifteen years' forced labour for treason during wartime by aiding espionage. This revision of the ruling was probably the result of the statement made by Louise de Bettignies to the judges hearing her case - the only time she spoke in German during the whole case - in which she acknowledged her role and sought mercy for her companions. From April 1916 onwards, the condemned prisoners served their sentences at Siebourg prison, near Cologne. On 20 April, Marshall Joffre granted Louise de Bettignies a mention in dispatches. At the end of January 1917, Louise de Bettignies was imprisoned for refusing to produce arms for the German army and having instigated an uprising by her fellow prisoners. Louise de Bettignies died on 17 September 1918 as a result of a complications during an operation on a pleural abscess. She was buried at Bocklemünd cemetery in Westfriedhof. Her body was rapatriated on 21 February 1920 on a gun carriage. On 16 March 1920, the Allies organised a tribute in Lille in which "Joan of Arc of the North" was posthumously awarded the Legion of Honour, the Croix de Guerre 14-18 With Palm medal, the British military decoration for oustanding bravery and was made an Officer of the Order of the British Empire. Louise de Bettignies, a.k.a. Alice Dubois, is buried at Saint-Amand-les-Eaux cemetery. On 11 November 1927, on the initiative of Marshall Foch and General Weygand, a statue was inaugurated in Lille on Boulevard Carnot. In Notre-Dame de Lorette, a display cabinet houses the cross on the tombstone that marked the grave of Louise de Bettignies at Cologne cemetery, as well as the mention in dispatches.