Dien Bien Phu camp, French paratroopers in a trench. Source: ECPAD France
France had been at war with Indochina since 1946 in its efforts to defeat the Viet Minh led by communist Ho Chi Minh who wanted independence for the country. The French Far East Expeditionary Corps (CEFEO) attempted to stop the Viet Minh troops advancing to Laos from 1952, notably by installing a fortified air-land base to break the enemy forces.
The first fortified camp was set up in Na San between October 1952 and August 1953. As the forces led by General Giap, a general in the Viet Minh army, furthered their advancement, the French command decided to build a second camp in Dien Bien Phu. 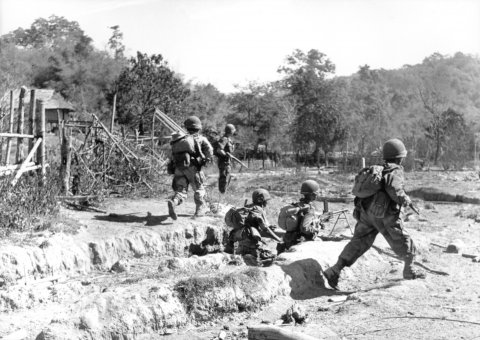 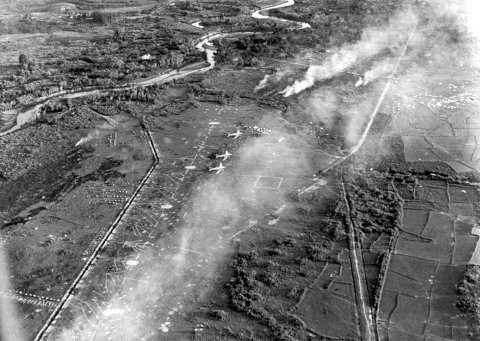 The valley of Dien Bien Phu is located 250 km from Hanoi, in the highlands close to the border with Laos. It is a basin, 16-km long and 6-km wide, surrounded by hills varying between 400 and 550 metres altitude through which the Nam Yum River crosses. A steep-sided and humid site, Dien Bien Phu is frequently flooded and often blanketed in fog. At one of the crossing points over the Nam Yum is a small village near to which the Japanese rebuilt a landing strip during World War II.

Between 20 and 22 November 1953, during the airborne Operation Castor, six battalions split into two airborne groups (the 1st Foreign Parachute Battalion, 1st Colonial Parachute Batallion (BPC), 6th BPC, 8th BPC, 2nd Battalion of the 1st Airborne ”Hunter” Regiment and 5th Vietnamese Parachute Battalion, led by General Gilles) took Dien Bien Phu without any difficulty and started building. The French troops gradually transformed the basin into a true fortified camp: the area was surrounded by several rows of barbed wire; the landing strip was repaired; fortified outposts were built in the hills surrounding the village: ”Gabrielle” in the north; ”Béatrice”, ”Dominique” and ”Éliane” in the east; ”Anne-Marie”, ”Huguette”, ”Claudine”, ”Françoise”, ”Liliane”, ”Junon” in the west; the HQ and ”Épervier” in the centre, and lastly ”Isabelle” in the south. Each outpost was divided into several positions; a communications network, partially covered and protected by barbed wire, provided links between the positions and the outposts; three drop zones were set up between the different positions in case the landing strip ever became unusable. 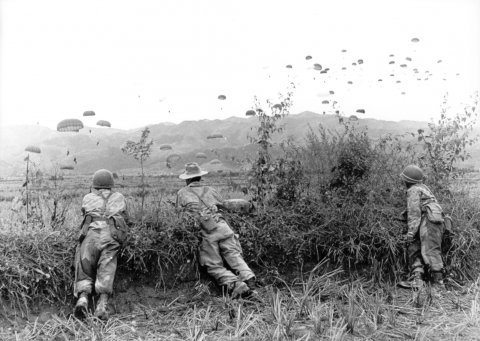 Viet Minh on the attack

In December 1953, the occupants of the remote garrison in Lai Chau, in the northwest of Vietnam, were evacuated to Dien Bien Phu. The Viet Minh therefore had only one target. After numerous clashes, the battle proper started in mid-March 1954.

On 13 March, the Viet Minh launched a violent attack on the ”Béatrice” and ”Gabrielle” outposts essentially held by legionnaires and Algerian infantrymen. The French positions were overwhelmed while the French artillery did not have the capacity to destroy the enemy cannons. Within two days, two positions had fallen into the hands of the Viet Minh. On 16 March, two enemy companies evacuated a part of ”Anne-Marie. The landing strip then became directly in the line of fire of the enemy's automatic weapons. 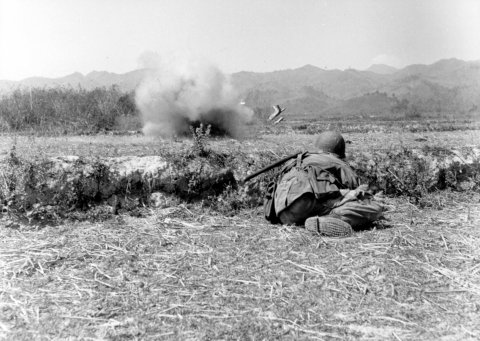 During the course of the battle, each side continued to expand its forces both in terms of men and equipment. While, with the addition of the paratroopers, the French forces stationed in the valley reached 15,000 in number, from 27 March onwards it rained incessantly and so no planes were able to land in or take off from the fortified camp; the beseiged were unable to be relieved and the wounded on both sides had to be treated in the valley. Giap fielded four infantry divisions and one artillery division, some 70,000 men who were regularly relieved and 60,000 auxiliary troops whose missions were to build roads and transport supplies and equipment. The number of forces deployed was far greater than what France had estimated. 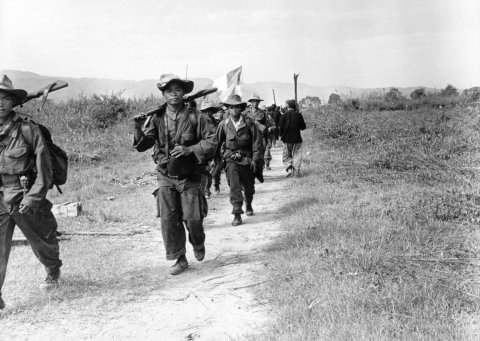 Taking a position high above the valley, the Viet Minh gradually turned up its pressure on the French garrison. While all attempts by rescue parties to open up routes into Dien Bien Phu failed, sending supplies to the fortified camp was made more and more difficult by the non-stop assault of anti-aircraft artillery by the enemy.

On 28 and 29 March, paratroopers and legionnaires destroyed enemy batteries positioned near ”Anne-Marie” which gave the garrison a glimmer of hope. The Viet Minh, however, continued to advance: on 30 March, a large section of ”Dominique” was lost; on 14 April, the Viet Minh occupied the entire north of the valley basin, including one third of the air strip. A series of attacks and counter-attacks was conducted around ”Huguette”, ”Dominique” and ”Éliane” day and night. The incessant rain transformed the camp into a quagmire. 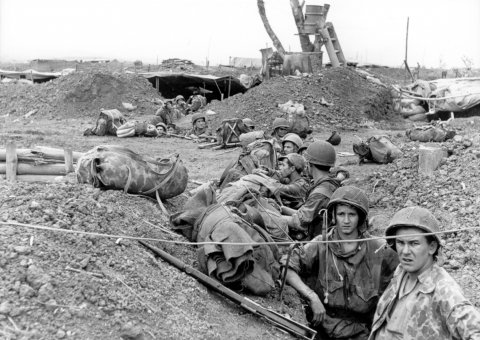 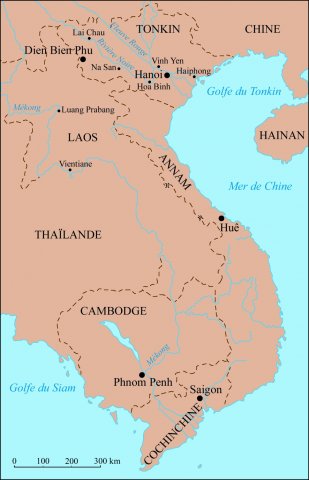 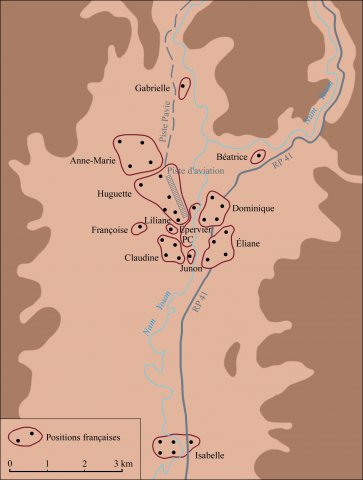 On 1 May, 10 p.m., after spending a significant time preparing its artillery, the Viet Minh launched a general offensive. The final outposts fell one after the other: ”Claudine”, ”Éliane” and the headquarters on 7 May; at 6 p.m. that same day, the cease fire was announced; on 8 may, after a final attempt by the infantry men and legionnaires to leave, ”Isabelle” was completely besieged.

Despite the significant difference in terms of troops and equipment between the French and Viet Minh forces, unlike in Na San, a valley held on the ground and in the hills by the French, in Dien Bien Phu the CEFEO only controlled the foothills and the valley basin with limited air support due to the distance of the take-off strips and the atrocious weather conditions.

The Viet Minh's victory in Dien Bien Phu heralded France's withdrawal from Indochina. Following the Geneva Agreements of 21 July 1954 that brought an end to the First Indochina War and recognised the democratic government of Vietnam, out of the 10,300 French soldiers taken prison in Dien Bien Phu, only 3,300 were returned to their families. The others, often left without any medical treatment, exhausted, starved, and certain summarily executed, lost their lives along the roads that took them to the Viet Minh detention centres or camps. 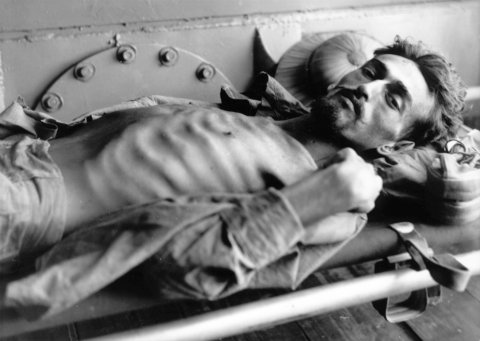 Part of the French colonial empire since the late 19th century, Indochina was made up of three colonies—Tonkin in the north, Annam in the centre and Cochinchine in the south—and two protectorates: Laos and Cambodia in the west.

While the Vietnamese nationalists negotiated with the French, which in 1948 led to the creation of an independent Vietnamese state that, under the authority of Emperor Bao Dai, united Tonkin, Annam and Cochinchine, and the recognition of the status of Associated States for Cambodia and Laos, the Viet Minh, fighting against Bao Dai, waged guerrilla operations to try and oust the French. After Chairman Mao's victory and the declaration of the People's Republic of China on 1 October 1949, the Viet Minh received significant logistical support from communist China, enabling the army to form field forces of several thousand men. General Giap, commander of the Viet Minh, then went on the offensive. During the course of October 1950, he pushed back the French from the Chinese borders. After a period, he launched the assault on Laos in the spring of 1952. To hem in and the destroy his forces, the CEFEO installed two air-land bases in the highlands, in Na San, between October 1952 and August 1953, then in Dien Bien Phu, from November 1953 onwards. The French withdrawal from Indochina began in Dien Bien Phu when the war ended on 8 May 1954.

The Geneva Conference which was held in the spring and summer of 1954 brought an end to the First Indochina War. The ensuing agreements recognised the democratic government, the unity and sovereignty of Vietnam (Tonkin, Annam and Cochincine), divided the country into two zones, the dividing line running along the 17th parallel, and promised free elections in 1956 to determine a national government for a united Vietnam. They established the cease fire in Indochina and stipulated that the French forces would regroup in the south, held by the nationalists, and the Viet Minh forces in the north. These same agreements made Laos and Cambodia neutral states. The French suffered heavy military losses: over 47,000 soldiers from mainland France, legionnaires and Africans were killed along with 28,000 native soldiers in the CEFEO and 17,000 in the armies of Indochina's associated states. The Viet Minh's losses, however, were estimated at around 500,000 lives.

The Viet Minh originated from the founding of the Indochinese Communist Party (ICP) in 1930 by Ho Chi Minh. Benefiting from the recession and anti-colonial protests, the ICP launched a series of strikes and demonstrations that were severely quelled by the French authorities. Despite a handful of economic reforms, the general political and social dissatisfaction was no bad things for the nationalists and the communists. The growing presence of Japan from 1940 helped the communist movement gain popularity while the French authorities saw their power gradually weaken.

In 1941, the Viet Minh—the Vietnam independence movement—was founded from the ICP with a more nationalist front. Officially the full political spectrum was represented, but in reality the key posts were held by ICP members, including Vo Nguyen Giap, who founded the people's army, and Pham Van Dong, the future prime minister of the Socialist Republic of Vietnam. The anti-Japanese actions of the first armed groups attracted America's attention, which sent agents to the region and supplied arms and equipment. The Japanese anti-French overthrow of March 1945 and the Japanese defeat gave the Viet Minh an opportunity to take command and proclaim the Republic of Vietnam in Hanoi in September 1945.

After failed negotiations with France, the Viet Minh became the key antagonist to the colonial power, while the nationalists, victims of communist terrorising, collaborated with the French within the framework of the associated states. In 1947, the clandestine organisations formed a government, an army and a propaganda mouthpiece, in other words the basis for an authoritarian communist regime.

The Viet Minh armed forces originated from the group of soldiers assembled and trained by Giap and from the Tu Ve, the first militia established in 1945. With the help of the Chinese from 1950, the Viet Minh armed forces organised themselves and rapidly grew using a model inspired by Soviet and Chinese experiences. The units were divided into three categories: the full-time soldiers (the Chu Luc), the regional forces and the people's army that supported the regular units by ensuring the provision of supplies, safeguarding the rear and participating in battle to compensate for losses.

In Dien Bien Phu, the Chu Luc fielded the 304th, 308th, 312th and 316th infantry division and the 351st heavy division with its engineering regiments and subterranean and anti-aircraft artillery.

1858: Start of France's conquest of Indochina.

5 July 1887: Creation of the Indochina Federation of Cambodia, Cochinchine, Annam, Tonkin and Laos under French rule.

1925: Workers' strikes and demonstrations in Indochina.

May 1930-September 1931: Agrarian riots and political uprising in Cochinchine.

30 August 1940: France and Japan came to an agreement giving military access to Japanese troops and recognised French sovereignty of Indochina.

September 1941: Creation of the Viet Minh by Ho Chi Minh.

9 March 1945: Japanese took occupation of all of Indochina; French troops retreated to China.

2 September 1945: Signing of Japan's surrender and the Democratic Republic of Vietnam was proclaimed in Hanoi.

March 1946: Negotiations between France and the Viet Minh regarding the recognition of Vietnam as a free state and the decision to hold a referendum in Tonkin, Annam and Cochinchine; French troops landed in Haiphong.

6 July-10 September 1946: The Fontainebleau Conference was held to discuss the future of Indochina. French-Vietnamese negotiations broke down.

21 November 1946: First skirmishes between the French troops and Viet Minh; start of the Indochinese War.

1947-1949: The Viet Minh engaged in guerrilla warfare in the north of Tonkin.

5 June 1948: The Halong Bay Agreements recognised the unified State of Vietnam and the country's independence led by Emperror Bao Dai.

6 December 1950: De Lattre made high commissioner and commander in chief of Indochina.

8 May 1953: General Navarre appointed Commander in Chief of Indochina.

7 December 1953: Colonel de Castries made Commander in Chief of the fortified camp.

21 July 1954: The Geneva Agreements brought an end to the Indochina War.