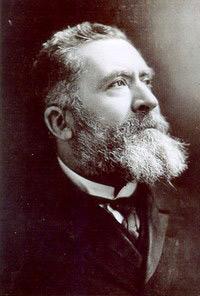 A son of the provincial bourgeoisie, Jean Jaurès graduated first from the Ecole Normale Supérieure de la Rue d'Ulm in 1878 and received the third-highest mark in the examination for the recruitment of philosophy teachers in 1881. He then taught at Albi, before returning to Toulouse in 1882 to assume his role as senior lecturer in the faculty of arts. In 1885, he was elected the Republican member of parliament for Castres. It was defeat at the elections held four years later that led him to run for office in in the Toulouse municipal elections, this time as a socialist.

Jaurès was not always a socialist, less still a Marxist. When the Republic was permamently founded after a decade of equivocation about the regime (the Second Empire collapsed in 1870 and the Republic was proclaimed but the divided monarchists dominated the Chamber of Deputies), Jaurès was only twenty years old. He became involved in politics in 1885, becoming the MP for Tarn at 25. Thus, he was the spirtual heir to Jules Ferry and sat among the «opportunists», or socially moderate Republicans. He found the radicals of Clemenceau too restless and the Socialists violent and dangerous to the Republican order under construction.

He was not particularly interested in the fate of the working class, and put his by now mythical eloquence at the service of the first social laws of the regime (freedom for trade unions, protection of union representatives, the creation of workers' pension funds, etc.). A son of 1789, he believed in institutional and Republican reformism, in the alliance of workers and the bourgeoisie for the triumph of liberty, equality and fraternity. In 1889, the Republicans won the general election but lost the seat of Carmaux (Tarn). Baron Reille and the marquis of Solages (who were elected members of parliament for Castres-Mazamet and Carmaux, respectively), the owners of mines in Carmaux, used every means at their disposal and applied as much pressure as possible to defeat the Republican, who advocated state control over companies. He was a lecturer in Toulouse and defended 2 theses before running in the municipal elections (1890).

Jaurès was removed from the political life of the nation when the great Carmaux miners' strike began in 1892. The mayor-elect, Calvignac, a former miner, trade unionist and socialist, was dismissed by the marquis of Solages for failing to attend several meetings in order to fulfil his obligations as the elected leader of the municipal government. The workers went on strike to support the mayor, of whom they were proud. The French government sent in 1500 soldiers from the Army in the name of «freedom to work»; the Republic seemed to be taking the side of monarchist employers against the legitimate defence of the universal suffrage of the people of Carmaux. In France, this was another Panama Scandal. Jaurès would no longer support this Republic, which was showing its true colours, with its capitalist members of parliament and ministers for whom finance and industry took precedence over respect for the laws of the Republic. He engaged with the miners of Carmaux, from whom he learnt about class struggle and socialism. Having begun as a bourgeois intellectual and social Republican, he emerged from the Carmaux strike an apostle of socialism. Under pressure from Jaurès, the government ruled in the Solages-Calvignac dispute in favour of Calvignac. Solages resigned from parliament, while naturally Jaurès was appointed by the workers of the mine to represent them in the Chamber of Deputies. He was elected despite the votes of constituents in rural parts of the constituency, who did not want «sharers». From then on, Jaurès would engage in the ongoing and resolute defence of workers. In Albi, he was the inspiration for the famous workers' glass factory. In the wine-growing area of Languedoc, he would visit the «free winegrowers of Maraussan» who created the first cooperative cellar.

He also fought for the innocence of Alfred Dreyfus. At the time he opposed orthodox Marxists, including their leader, Jules Guesde, for whom Dreyfus was a bourgeois officer and therefore guilty. For Jaurès, the despondency at the misfortune and injustice suffered by Dreyfus removed class differences; Dreyfus was no longer a privileged member of society or exploiter, but a man who had suffered unfairly. He founded the newspaper L'Humanité in 1904 and in 1905, was one of the major protagonists in the fondation of the SFIO, which unified the various socialist parties in France.

Jaurès' pacifist position shortly before World War I made him very unpopular among nationalists, and he was assassinated at the Café du Croissant on rue Montmartre in Paris three days before the commencement of hostilities. The assassinatation achieved its objective, in that it allowed the left to rally together, including many socialists who had been hesitant, to the «Sacred Union». At the beginning of the «Great War», and in response to the massacre resulting from it, many French villages named roads and places in his honour, as a reminder that he was the fiercest opponent of such a conflict. A station on the Paris underground rail network also bears his name. The song by Jacques Brel, Jaurès (1977), recalls the point at which the politician became a mythical figure for the working classes. The French Socialist Party has paid tribute to him through its political foundation, the Fondation Jean-Jaurès. After four years and eight months in custody, his assassin, Raoul Villain, was acquitted on 29 March 1919.

«Courage is looking for and telling the truth, not living by the law of the triumphant lie and echoing unintelligent applause and fanatical booing.» (1903)

«I have never disassociated the Republic from the ideas of social justice, without which socialism is nothing more than words».(1887)

«A little internationalism distances one from one's country; a lot reduces it». [list]«Capitalism brings with it war just as clouds bring with them storms»