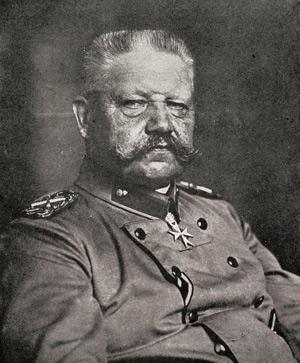 Hindenburg, who came from a long line of Prussian army officers, was born in Posen (today Poznan) on 2 October 1847 to Robert von Beneckendorff und von Hindenburg, a lieutenant in the 18th infantry, and Louise Schwickart. Hindenburg was a cadet at the Wahlstatt military academy and in Berlin. In 1859 he was a second lieutenant in the Prussian Guard's 3rd infantry regiment and in 1866 took part in the Austro-Prussian War, fighting in particular at Rosberitz and Königgrätz. He participated in the 1870-1871 campaign against France at Saint-Privat in August and in the siege of Paris. On 16 January 1871 he was present at the proclamation of the German Empire at the chateau of Versailles. Hindenburg was admitted to the War Academy in 1873 and pursued his training with the general staff. He was a captain on the general staff of the 2nd army corps in Stettin in 1878 and of the 1st division in Königsberg in 1881. He was the head of a company of the 58th infantry regiment in 1884 before becoming a major in the operations section of the general staff led by von Schlieffen. In 1890 he became a war ministry department head.

Hindenburg was promoted to colonel in 1893 and headed the 91st infantry regiment in Oldenburg. In 1896 he became a brigadier general. He was the chief of staff of the 8th army corps in Koblenz before being appointed major general in command of the 28th division in Karlsruhe in 1900 and taking over as head of the 4th army corps in Magdeburg in 1903. He retired in 1911. On 23 August 1914 Hindenburg was called to command the 8th army and stopped the Russian offensive in East Prussia by defeating Samsonov at Tannenberg that month and Rennenkampf at the Mazurian Lakes in September. He was the Eastern front commander-in-chief in November 1914. The battles he won in Poland and Lithuania from 1914 to 1916 made the field marshal a national hero and Falkenhayn's successor as general chief of staff in August 1916. With Ludendorff as second in command, he took over as head of general military operations on all fronts. Hindenburg adopted a defensive stance in the West marked by the construction of a huge complex of fortified positions (the Hindenburg Line) and focused all efforts on Romania and Russia on the Eastern front, supported the Austrians on the Italian front and decided to wage unrestricted submarine warfare. In addition to military authority, Hindenburg and Ludendorff also had strong political clout and brought about the resignation of Bethmann-Hollweg, who disagreed with certain aspects of the conduct of the war, in July 1917. In 1918 the resumption of German offensives on the Western front failed. Beefed up by American units, the allied forces inexorably pushed back the German troops. Hindenburg urged the government to request an armistice. Hindenburg was demobilised in July 1919 and published his memoirs, Aus meinem Leben, the following year. In 1925 Hindenburg was elected president of the German Republic. In 1932 he ran again, this time against Adolf Hitler, whom he defeated but named chancellor the following year. On 2 August 1934 Hindenburg died in Neudeck, East Prussia.