Image published in the Hachette Almanac in 1908. Source: Author's document.

What was the demographic situation of France as it entered into war on 3rd August 1914? For several centuries, right up to the 1860s, France was the most populated country in Europe, even ahead of Russia at certain times. Then, mainly due to the effect of a low birth rate at the end of the 18th century, when France entered into war it occupied fifth position in demographic terms in Europe, behind Russia, the German Empire, Austria-Hungary and Great Britain, closely followed by Italy. In 1914, the population of France was still very rural, stagnant and ageing. The 1914 war struck a country which was struggling demographically. The enforced effort was huge, and the consequences after the war weighed heavy.

Remember that, since the Treaty of Frankfurt, which put an end to the Franco-German war in 1871, France was stripped of Alsace, except for Belfort, and part of Lorraine. Any comparison must take this into account.

In the 19th century, 60 French départements were decreasing demographically, and only 27 were growing. ”A France, which had previously been somewhat unified in its demographic trends gave way, in the 19th century, to a France where départements benefiting from rural emigration (Seine, Seine-et-Oise, Rhône, Meurthe-et-Moselle, Gironde, Loire-Atlantique or Bouches-du-Rhône) were in opposition to those facing demographic loss. Apart from growth centres caused by urban immigration (Seine, Rhône, Gironde), a few others were due to foreign immigration on the borders (Alpes-Maritimes) or their remoteness, which restricted rural emigration, such as certain maritime façades (Finistère, Morbihan). ” 1

In 1911, despite this rural emigration, France was ranked only sixth for its rate of urbanisation2. The United Kingdom, Belgium, Germany and Italy were ahead of it and it was on a par with Spain and Sweden. ”Parsimonious in its human reproduction, France kept a lot of its population in the fields, which reduced its urban expansion capacities. ” 3

Therefore, when France entered into war in 1914, it was a very rural country. Peasants made up the large majority of the French infantry4, and they suffered the greatest losses, as the war memorials testify in even the smallest villages.

A France in contrast with an expanding Europe

In the France deprived of Alsace and Moselle since 1871, the 1911 census5 counted 39.6 million inhabitants6. The population of metropolitan France represented 9% of the European population and 2.5% of global population. Its density was close to 74 inhabitants per km2, the lowest out of the other large European countries, except Russia. This image, published in around 1950, was accompanied with the following comment:

”Central and Germanic Europe before 1914: an immense population reservoir”.

The relative downgrading of France, overtaken in 1911 by the German Empire, Great Britain and Austria-Hungary, all three of which were less populated than France at the start of the 1860s, is due to its low birth rate, the result of a long evolution that began in the middle of the 18th century with the start of a drop in fertility, one century before its large neighbours. The movement sped up under the French Revolution and continued throughout the 19th century. This image, published in the Hachette Almanac in 1908, is perfectly informed of reality.

However, the French marriage rate in the years preceding the 1914-1918 war, i.e. 15.6 newly weds per 1,000 inhabitants, is comparable to that of the other large European countries and the same level as the one throughout the 19th century, if we exclude the troubled periods of war. 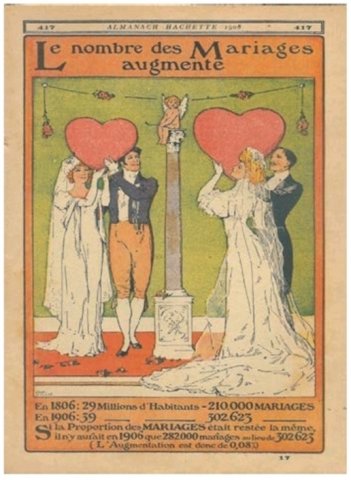 This image, which was published in the Hachette Almanac in 1908 shows that the birth rate from the 19th century until the dawn of 1914 did not decrease in France.

The increase in marriages illustrated by this image simply corresponded to the population increase.

The low birth rate in France was not offset by its death rate, especially masculine, which was higher than that in Germany, Great Britain, and more generally north-western Europe. However, infant mortality was still high (108 deaths of children under the age of one per one thousand births in 1912 and 1913), but within the European average.

But 1913, the last year of peace, was not a year of depopulation in France as the demographic movements are as follows: 298,750 marriages, 745,539 live births, 703,638 deaths, therefore a natural excess of 41,901. However, this natural excess put the population of France at the lowest level in Europe.

Population movements in the main European countries in 1912:

This situation and the concern to reduce mortality, notably of children and women in childbirth, brought people from all horizons to fight against depopulation in the last decade of the 19th century. In 1896, the National Alliance for the Growth of the French Population was born. It was founded by Jacques Bertillon, doctor and statistician, and Charles Richet, Nobel Prize for Medicine, and included famous members such as Emile Zola10. Its status of public utility was declared by President Poincaré in 1913.

An ageing France in a young Europe

On the eve of the 1914 war, the population of France presented another unfavourable demographic characteristic: an ageing population.

These elements must be completed with two other French particularities: low emigration and early and significant immigration. Between 1871 and 1914, the other European countries experienced high emigration: for example, nearly three million Germans emigrated to North and South America. During the same period, barely half a million French people left France, often temporarily like the ”Barcelonnettes” and the Basques in America.

French demographic weakness undoubtedly played a role in the genesis of the conflict. Young Germany, with 67 million inhabitants, may have believed it would easily conquer an ageing France with a population of 39 million.

In 1913, it was this weakness13 which led the French government to vote, by proposal of General Joffre, General of the French Army since 1911, the three-year law. Defended by Louis Barthou, President of the Council, Eugène Etienne, war minister, and backed by Raymond Poincaré, President of the Republic, this unpopular reform was voted in on 19th July 1913 by the Chamber of deputies and then by the Senate on 7th August 1913. 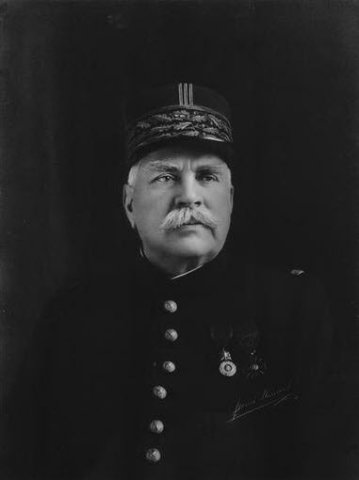 At a time when large battalions ruled on the battlefields, the Parliament decided that young Frenchmen had to complete, from 1913, three years of military service so that France could build an army capable of facing the German army. This considerable effort did not prevent a crisis in numbers in 1915. This was partially made up for by bringing in colonial troops, and then, essentially, by the spectacular rise of the British army, Italy's joining in 1915 and the United States in 1917.

Although badly affected by the 1914-1918 war, Germany, thanks to its demographic situation, had withstood the shock better and its numbers were double those of France at the time of the 1939-1945 war14. 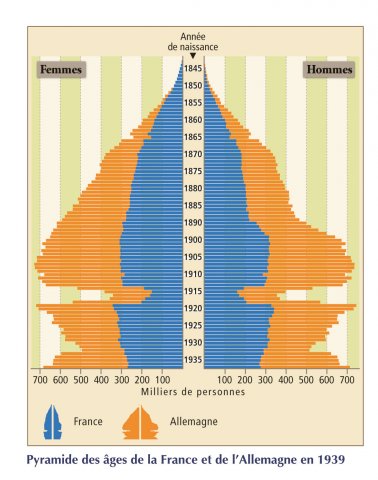 The demographic situation of France, profoundly altered since before the 1914-1918 war and then stripped of 1,350,000 war dead, was undoubtedly one of the causes of the collapse of 1940 due to direct effects - crisis of numbers of soldiers and lack of workers - and more indirect effects - economic weakness, skittish state of mind, timid external politics and strategy.

4. Specialised workers were quickly recalled as soon as it was assumed that the war would be long and would require industrial mobilisation.obilisation industrielle.

10. Today, the Population & Avenir association is its successor.