After the seemingly endless ”Phoney War” which followed Britain and France's declaration of war on Germany as a result of the invasion of Poland, the situation suddenly changed in the west when, on 10 May 1940, Germany launched an offensive on Holland, Belgium and Luxembourg. 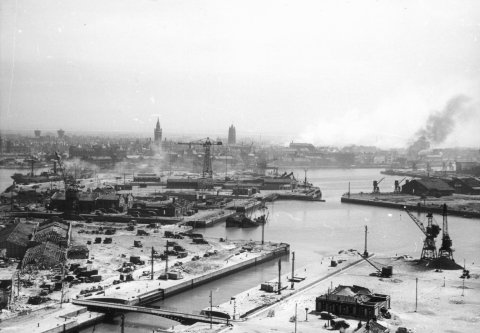 The German offensive in the west: Allied troops retreat to Dunkirk

In a few days, German troops drove back the Allied forces, who evacuated the Low Countries and retreated over the French side of the Meuse and into northern France. Having broken through the French front at Sedan, the panzers advanced rapidly towards the coast of the English Channel, which they reached on 20 May 1940, then headed northwards towards Boulogne and Calais. Boulogne fell on the 25th, Calais on the 26th, while fighting in the suburbs to the south and west of Lille, which fell on the 29th, went on until 31 May. 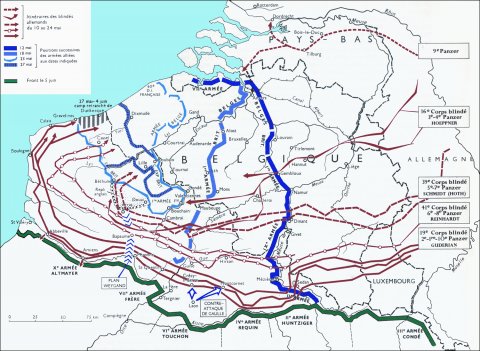 Click on the image to open the map in PDF format

Despite their determined resistance, the Allies risked falling into a trap. Over land, they could not break the encirclement, and nearly 400 00 men were left stranded north of the Sedan-Abbeville line. Believing the battle to be lost and wishing to strengthen its own defences, Britain decided to evacuate its troops from the French theatre of war. Progressively abandoning its positions, the British Expeditionary Force retreated to Dunkirk to be evacuated by sea. After stopping for a few days on the Channel coast, giving the Allies the extra time they needed to attain their goal, the German tanks then headed for Dunkirk, while enemy aircraft subjected the town to heavy bombing. 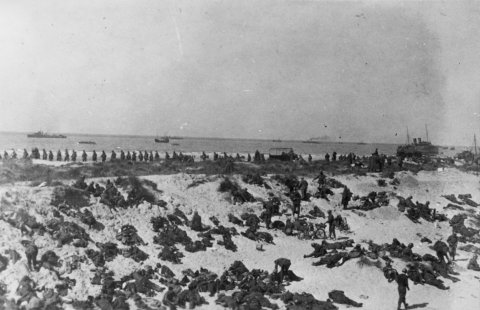 From 28 May to 4 June, the French Navy helped the British Navy evacuate the troops. Code-named ”Operation Dynamo” by the British, the evacuation was commanded by Admiral Ramsay. All the available vessels, including private ones, were requisitioned. Under continuous aerial attack, over 340 000 Allied soldiers, including 120 000 French and a few thousand Belgians, were evacuated from Dunkirk before it fell, a third of them from the beaches.

Some 40 000 of their comrades could not be evacuated and were taken prisoner. They were mainly soldiers of the 68th and 12th Infantry Divisions and elements of the Fortified Sector of Flanders tasked with slowing down the German advance. With the support of the Royal Air Force and the Allied navies, they contributed to the success of the operation. 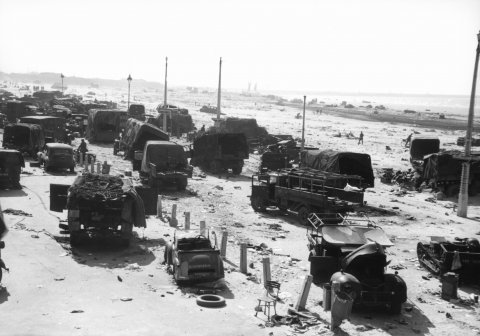 Abandoned French and British vehicles on the beach of Malo-les-Bains after the evacuation. Source: ECPAD

The Allied soldiers also left behind all their heavy artillery: around 2 000 cannons, 60 000 vehicles and tonnes of munitions, fuel and supplies. Meanwhile, although the Luftwaffe was unable to prevent the evacuation, the Allies suffered considerable losses: between 150 and 200 vessels of all kinds, and nearly as many aircraft. 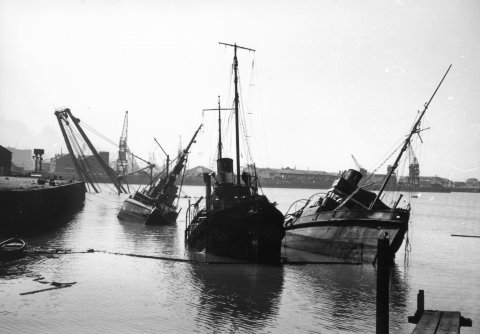 Rhine tugs sunk in the port of Dunkirk. Source: ECPAD

Between 4 000 and 5 000 men were lost at sea. The French evacuated to Britain did not stay long. Most were repatriated to Brest and Cherbourg in the days, or even hours, that followed, to rejoin the fighting. On the Somme and the Aisne, the French command was trying to hold back the German troops. But their superiority was overwhelming. Despite a few pockets of resistance, France requested an armistice, which was signed at Rethondes on 22 June 1940. From then on, the fight continued from British soil. 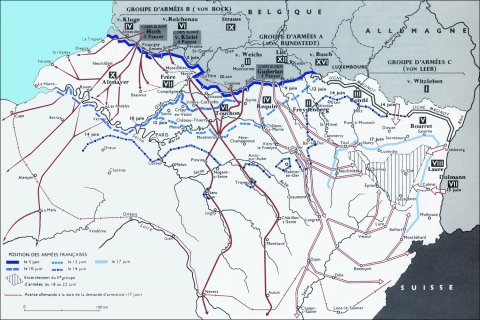 Click on the image to open the map in PDF format

The sinking of the Bourrasque 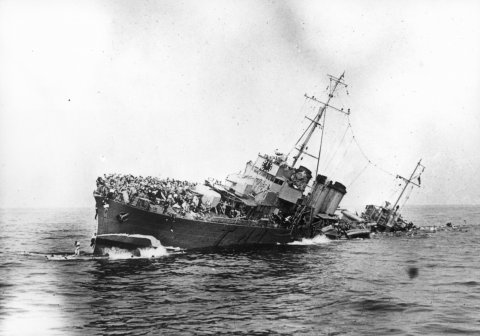 The sinking of the Bourrasque. Source: ECPAD

One of the most dramatic episodes of Operation Dynamo was the sinking of the Bourrasque. On the afternoon of 29 May, when French troops had just boarded the ship at Quai Félix Faure alongside the Bouclier and the Branlebas, it came under German fire from off the Belgian coast. The ship was soon shaken by an explosion, probably caused by a mine, and quickly went down. Of the 700 to 800 men on board, nearly two-thirds perished. 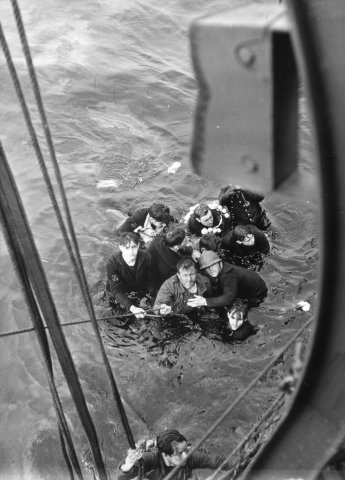 The town of Dunkirk and the bombardments

The first French town to be heavily bombed and the last to be liberated, Dunkirk was severely damaged during the Second World War. But it is difficult to determine how much of the destruction was caused by the bombardments of 1940 and how much by the bombardments at the end of the war. After the war, Dunkirk was declared ”devastated”, having been 90% destroyed: of a total of 3 362 blocks of flats in the town before the war, 1 524 were completely destroyed and 805 severely damaged; the port was strewn with wrecks and no longer had any wharfs or locks.

Plans drawn up by architect Théodore Leveau to rebuild the town were adopted in 1947. Its reconstruction, funded by the town council and central government, and carried out by local firms, began on 4 September 1949 and was completed in 1963. Meanwhile, the port was rebuilt in less than two years.

With the completion of the works, Dunkirk preserved the broad outline of its pre-war layout. Yet while the physiognomy of the town remained relatively unchanged, it had completely lost its regional style. 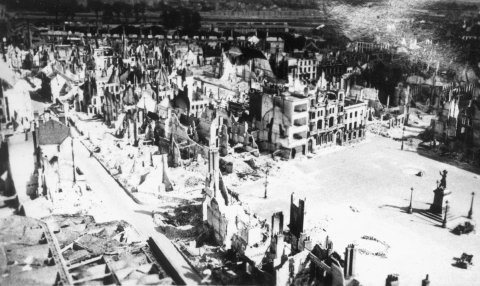 Place Jean Bart, Dunkirk, after the bombardments of May 1940. Source: Dunkirk municipal archives

The Battle of Dunkirk, which caused so much suffering, yet, often as a result of acts of bravery or even heroism, enabled large numbers of soldiers to be evacuated, was quick to become a source of inspiration for novelists and film directors. In 1949, Robert Merle published Week-end à Zuydcoote (published in English as Week-end at Zuydcoote), which won the Prix Goncourt. A few years later, in 1964, Henri Verneuil turned the novel into a film with the same name (English title: Weekend at Dunkirk). Both works, whose success is undeniable, keep alive the memory of the siege of Dunkirk and encourage us to ask ourselves how we might have reacted in the same circumstances. 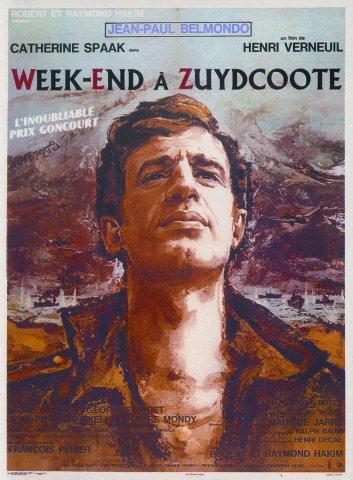 10 May 1940: Germany launches its offensive in the west: invasion of the Netherlands, Belgium and Luxembourg.

15 May 1940: Paul Reynaud announces to Winston Churchill that ”the battle is lost”; the Dutch army surrenders.

19 May 1940: General Weygand replaces General Gamelin as commander-in-chief of the French Army.

20 May 1940: German occupation of Arras, Amiens and Abbeville.

26 May 1940: German armoured divisions begin their advance towards Dunkirk; fall of Calais.

27 May 1940: The Luftwaffe intensifies its bombing of Dunkirk, now entirely cut off; fall of Gravelines.

28 May-4 June 1940: Battle of Dunkirk; evacuation of British and French troops by Operation Dynamo; surrender of the Belgian Army (28 May).

5-8 June 1940: The Germans break through the last French defensive lines on the Somme and the Aisne.

14 June 1940: German troops march on Paris, which is declared an open city. 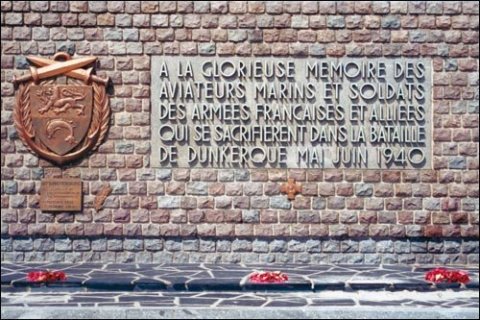