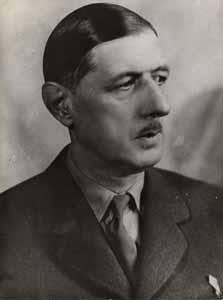 A French general and politician (1890-1970), Charles de Gaulle was the first person to advocate the need for France to have armoured military vehicles. A leader of the French resistance during World War II, he was the founding father of the Fifth Republic, which was particularly noteworthy due to the election of the president under universal suffrage.

Charles de Gaulle was born in Lille on 22 November 1890 to a patriotic Catholic family. He spent his childhood in Paris, studying with the Jesuits and very early opted for a career in the forces. In 1908 he entered the special Military Academy at Saint-Cyr. After four years of study, he was transferred to Arras in 1912 as a sub-lieutenant.

During the First World War he was wounded in combat three times and left for dead in the Battle of Douaumont (1916). Taken prisoner by the Germans, he attempted to escape on five occasions, but was recaptured each time. He was not freed until the Armistice, on 11th November 1918. Pursuing his military career, Captain De Gaulle saw active service in several countries (including Poland and The Lebanon). Between the wars he wrote several works in which he was critical of French defence policy: in particular he believed that the army must be subject to the decisions of politicians and that it was essential for the defence of France, to raise a corps of armoured vehicles in order to face the threat of German mechanised power. At the same time he began his involvement with politics: in 1931 he was seconded to the General Secretariat for National Defence in Paris. Promoted to Colonel in 1937, de Gaulle was given the command of the 507th tank regiment in Metz. When France and Britain declared war on Germany on 3 September 1939, he was given temporary command of the tanks of the 5th army. At the time of the German invasion, de Gaulle distinguished himself several times at the head of his unit, in particular halting the Germans at Abbeville (27-30 May 1940). Appointed General on 1 June 1940, de Gaulle became Under Secretary of State for War and National Defence a few days later, in the Government of Paul Reynaud.

On 17 June, de Gaulle left to continue fighting the war from London; he launched an appeal for resistance over the BBC, on 18 June. As a rebel General, he was sentenced to death in absentia. Recognised by Churchill as the "leader of the Free French", de Gaulle organised armed forces that became the Free French Forces. Meanwhile, he provided Free France with a kind of Government in exile, the French National Committee, which became the French Committee for National Liberation (CFLN) on 3 June 1943, following its arrival in Algiers. From 1942 onwards, De Gaulle gave Jean Moulin the task of organising the National Committee for Resistance (CNR) in France within which political parties of all persuasions, trades unions and resistance movements had to be represented, in order to co-ordinate the struggle. After the Normandy landings on 6 June 1944, de Gaulle insisted with General Eisenhower, supreme commander of allied armies, that Paris should be quickly liberated, although the strategy was to head directly eastwards, bypassing the Capital. Eventually, the 2nd Armoured Division of General Leclerc liberated Paris on 25 August.

Once the fighting was over, de Gaulle began to rebuild the country at the head of the interim government. He introduced several major measures (including the founding of the Social Security system). But, on 20 January 1946, he left power due to a disagreement of the role played by political parties. The Constitution of the 4th Republic, adopted shortly afterwards, greatly displeased him. He criticised it several times (such as in his speech in Bayeux, in June 1946), reproaching it for the weakness of its executive power. De Gaulle then entered the opposition. In 1947, he launched the Rassemblement du peuple français (RPF or Alliance of the French People), a movement that performed badly in elections, despite attracting many members. This was the beginning of the "wilderness years" : de Gaulle withdrew to Colombey-les-Deux-Églises, wrote his memoirs and travelled.

From 1954, France was involved in a war of decolonisation in Algeria. On 13 May 1958, the French Algerians launched an insurrection in Algiers to consolidate their position. They called for de Gaulle to take power. The President of the French Republic, René Coty, fearing that this crisis might descend into civil war, offered de Gaulle the position of Leader of the Cabinet. De Gaulle refused to return to power unless he could change government institutions. During the summer of 1958, he inspired the writing of a new Constitution: this was approved in a referendum on 28 September 1958 by almost 80% of French people. The 5th Republic was born. On 21 December 1958, Charles de Gaulle was elected President of the Republic by indirect universal suffrage.

The most urgent task to be faced was Algeria. De Gaulle offered the Algerians self-government in 1959 and organised a referendum on the subject in 1961: 75% of French people said "yes" to Algerian self-government. In April 1961, disaffected partisans of French Algeria staged an attempted coup that failed. Negotiations between the French and Algerians ended with the Evian agreements, signed on 22 March 1962 and accepted by referendum in both France and Algeria. 1962 was a real turning point, firstly on an institutional level: the General proposed electing the Head of State through universal suffrage. This reform aroused strong opposition, but the referendum on constitutional reform was successful, with a "yes" vote of 62.2%. In 1965, the presidential election was conducted by direct universal suffrage for the first time. Through to the second round (with 43.7% of the vote), de Gaulle was finally elected, beating Mitterrand, with 54.8%. In terms of foreign affairs, de Gaulle pursued a policy of national independence, providing France with its own means of defence: the first French atomic bomb was detonated at Reggane in the Sahara in February 1960. De Gaulle refused the protection of the United States and in 1966 withdrew France from the integrated NATO system - but France remained a member of the Atlantic alliance. At the same time, France entered the European Economic Community (EEC) on 1 January 1959. The country faced a major crisis in May 1968. Students organised huge demonstrations, and were joined by workers, triggering a general strike. De Gaulle succeeded in calming the situation by granting certain benefits to workers. On 27 April 1969, he put a plan for regionalisation and reform of the senate before the French people. His proposal was rejected in a referendum by 52.4% of the vote. Failing to gain the approval of the French people, he felt he lo longer had their trust and preferred to resign. Charles de Gaulle retired to Colombey-les-Deux-Églises and continued to write his memoirs; he died on 9 November 1970. In accordance with his will, de Gaulle was not given a state funeral. He was buried next to his daughter Anne, with a simple inscription on his grave, "Charles de Gaulle 1890-1970".