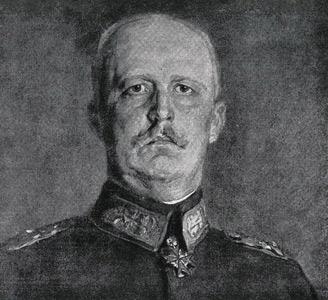 On 9 April 1865 Erich Ludendorff was born to a family of shopkeepers in Kruszewnia, in the province of Posen (today Poznan, Poland). Ludendorff was a cadet at the schools of Pl½n and Lichterfeld from 1877 to 1882, second lieutenant in the 57th infantry regiment in Wessel and lieutenant in the 2nd marine battalion in Kiel-Wilhemshaven and 8th grenadiers in Frankfurt-am-Oder before entering the War Academy in Berlin, graduating in 1895 with the rank of captain. He was assigned to the general staff, where he headed the operations section from 1908 to 1912 and participated in drawing up the plan for the invasion of France under Schlieffen's and Moltke's orders. This period was interspersed with more or less brief stints at the head of an infantry company in Thorn and on the general staffs of the 9th infantry division in Glogau and the 5th army corps in Posen. He was promoted major in 1900, lieutenant-colonel in 1907 and colonel in 1911.

Ludendorf was assigned to the 39th infantry regiment in Düsseldorf in late 1912. He took command of the 85th infantry brigade in Strasbourg in April 1914 while continuing to participate in many general staff activities. In August 1914 Ludendorff was quartermaster of the 2nd army commanded by von Bülow and actively participated in taking Liege during the invasion of Belgium, which earned him the appointment of chief of staff of the 8th army on the Eastern front on 21 August 1914. After the victory of Tannenberg he became commander-in-chief Hindenburg's chief of staff. When Hindenburg succeeded Falkenhayn as the German armies' general chief of staff in summer 1916, Ludendorff became first quartermaster general, dealing with supply issues, drawing up military plans and directing operations. He advocated total war and ardently defended unrestricted submarine warfare, which brought him into conflict with Chancellor Bethmann-Hollweg, causing the latter to step down in July 1917. Ludendorff was also one of the main negotiators of the Treaty of Brest-Litovsk (3 March 1918), which took Poland, the Baltic States, Finland and Ukraine away from Russia. Despite fierce fighting, his major Western front offensives in spring 1918 failed to prevent Germany's defeat. In late September he urged the government to request an armistice but retracted the decision.

In October 1918 he resigned and fled to Sweden, blaming Germany's civilian leaders for losing the war. In spring 1919 he went to Bavaria and got involved in politics, growing close to the National Socialists and supporting Hitler in his failed 1923 putsch. In May of the following year he was elected to the Reichstag. In March 1925 he stood for president as the nationalists' candidate but won few votes, losing the election to Hindenburg. In 1926 he founded his own party, the Tannenberg Bund. In 1935 he rejected Hitler's offer to raise him to the dignity of marshal. In addition to his war memoirs (1919), he was the author of many military works and political writings. He died in Tutzing, Bavaria on 20 December 1937.