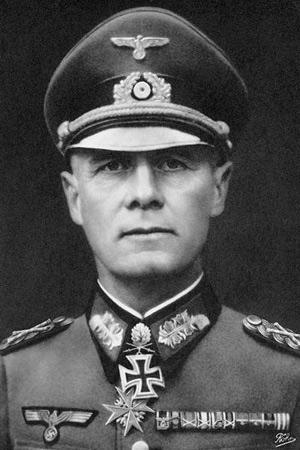 Erwin Rommel was born in Heidenheim on the 15th November 1891. He was from a middle-class background, the son of a maths teacher. He joined the army in 1910. In 1914, at the beginning of the First World War, he was just 23 years old but very quickly proved to be an excellent soldier and leader of men. Decorated with the Order of Merit, after the war he became an instructor at the Potsdam War Academy and was then appointed director of the Wiener-Neustadt War Academy. Sympathetic to the National Socialists, in 1938 he was appointed Chief of Staff by Hitler at his headquarters and, a year later, made head of his personal guard. He was promoted to the rank of Division General on the 1st August 1939. After the campaign in Poland, he commanded the 7th tank division during the invasion of France, between May and June 1940, although he had no practical experience of tank warfare. His division rapidly advanced on Lille before taking the Maginot Line from the rear, capturing part of it. It was called the "Phantom Division", because nobody ever knew exactly where it was, but it would always appear when least expected, most notably in the breach of the Meuse on the 13th May, which was a tactical feat. Erwin Rommel was then appointed Commander of the German military forces of the Afrika Korps, in order to come to the aid of the Italians struggling in Libya against the British.

He succeeded in turning around the situation in Africa, where he was nicknamed the Desert Fox by both friends and enemies, because he was crafty and constantly improvising in order to change the outcome of the fighting. Appointed Army General on the 30th January 1942, he was to conquer Tobruk on the 21st June. Two days later, he was promoted to the dignity of Marshal. On the 3rd September 1942, Rommel fell ill and returned to Germany. When he came back to Africa, the British had already advanced considerably. The British General Montgomery managed to capture the town of El Alamein forcing the Afrika Korps and the Italians to retreat before taking them in a pincer movement using Anglo-American troops, who had been landing in Algeria and Morocco since the 8th November. Rommel managed to regroup the German forces along a front line in Tunisia known as Mareth, but it was a delicate operation as there was a lack of men and equipment.

On the 5th March 1943, he was recalled by Hitler and left Africa. He therefore did not witness the final defeat of the Afrika Korps in Tunisia on the 13th May 1943. He then took a command position in Italy and was later made responsible for inspecting the Atlantic Wall, as well as commanding the B group of armies located in Normandy under the orders of Feldmarschall von Runstedt with whom there was constant friction. His task was to defend the beaches from an allied invasion. During a discussion with General Bayerlein, Rommel told him: "It's no longer a question of crushing the attack from the fanatical hordes (the Russians) driven forward in masses with no regard for their losses... we must face up to an enemy who applies all his intelligence to use his technical resources... with no expense spared on equipment. Enthusiasm and tenacity are not enough to make a soldier, he must be intelligent enough to make the most of the situation and that is precisely what our adversary knows how to do.... "(The War without Hate, Rommel's personal papers published in 1953 by the English historian Liddell Hart, p 417).

Rommel was aware that the first hours of the allied assault would be critical. However, on the 6th June 1944, he found himself in Germany to celebrate his wife's birthday, as all the intelligence in his possession clearly indicated that there would be no landing before the 15th. Within a day he returned to his command post at la Roche-Guyon and tried to repel the forces landing by sea, but he knew it was already too late. On the 17th July 1944, he was seriously wounded in an air attack above the village of Vimoutier. On the 20th July 1944 there was an assassination attempt on Hitler. Rommel, who was unable to take part personally but was strongly implicated, was relieved of his post and Hitler left him no other choice but suicide, guaranteeing the safety of his family in return.

Four days after his death on the 14th October, Germany held an extravagant funeral in honour of this military leader, who was much valued by the people and whose execution would have tarnished the image of the State and the party. He was buried in Herrlingen.