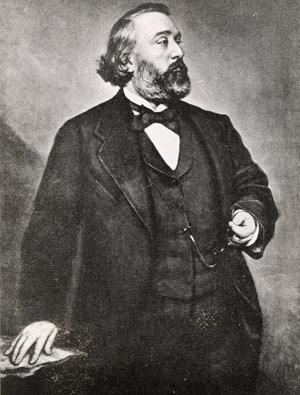 Léon Gambetta was born on the 2nd April 1838 in Cahors, the adopted town of his Genoan father Joseph, and Marie Madeleine Orasie Massabie, the daughter of a pharmacist from Molières, a town in the Tarn-et-Garonne region. Whilst still very young, Léon stood out because of his intelligence and tremendous memory. He became a boarder at the lower seminary of Montfaucon before completing his schooling at Cahors grammar school. A candidate in the national education competition, he won the French dissertation prize and then obtained an Arts Baccalaureate in 1856, aged 17. To the great displeasure of his father who wanted him to take over his business, the young man, who was a talented speaker, left for Paris in January 1857 and enrolled in law school to follow a career as a lawyer. He requested and was granted French nationality on the 29th October 1859. He had his vive voce for his law degree on the 19th January the following year and took his oath on the 8th June 1861. His first defence cases set him against parliamentary opposition groups from the "left" (the Republicans). The Baudin subscription affair (1851) made him famous in 1868. This case was brought by the Imperial government against newspapers advocating a subscription with a view to building a monument in memory of this elected representative, who was killed on the 3rd December on the streets of Faubourg Saint-Antoine fighting for the people.

The young lawyer took the opportunity to make a closing speech criticising the regime of Louis Napoléon Bonaparte. In January 1870, as member of parliament for the district of Marseille, he stood against the government of Emile Ollivier whose support for Napoléon III was perceived as treachery by the Republicans. However, Gambetta called for national unity and passed a bill for military funding on the eve of war. During the night of the 3rd to the 4th September, Léon Gambetta, after having attempted in vain to appease the revolutionary situation arising from the announcement of the capitulation of Sedan, announced the fall of the Empire in the Bourbon Palace, which had been invaded by the mob. In the Town hall, he witnessed the declaration of the Government for the national defence, with which he became associated alongside Jules Simon and Ernest Picard. On his own initiative he settled in to the ministry of the interior and ordered the dismissal of the prefects of the Empire. At the same time he organised the capital's defences. On the 7th September in a besieged Paris, Léon Gambetta appeared like somebody heaven-sent. Opposite a government that was overwhelmed by the situation, he led the national defence in the provinces. Gambetta was the embodiment of resistance against the Prussian occupier. He took off in a balloon to join the Tours delegation via Montdidier, Amiens and Rouen, adding the war department to his portfolio, setting up new armies, supervising the training and provision of troops, building factories, increasing official visits, with briefings and speeches calling to "prolong the war until extermination". At the same time the capital was subject to a siege by the imperialists: the city was bombarded and the population starved. Adolphe Thiers ended up commissioning (22nd January 1871) Jules Favre, the minister for overseas affairs, to approach Bismarck in order to agree an armistice. Gambetta distanced himself from the political scene and negotiations because of a decree that he signed in Bordeaux making Empire assembly members of ineligible. He resigned on the 6th February.

Gambetta was elected on nine lists during the general elections of the 8th February 1871: in the East, Paris, Marseille and Algeria. He chose the Lower Rhine. He voted against the peace agreement and expressed his intention to recover the lost provinces. Returning from his retreat in Saint-Sébastien and having lost his seat in parliament on the 2nd July, he campaigned in the Bouches-du-Rhône and Seine regions. As MP for the Seine, Gambetta formed an extreme left parliamentary party "the Republican Union", founded a newspaper, La République française, increasing his speeches in the provinces, during which he castigated the conservative policy of the National Assembly and displayed militant anticlericalism. In the commotion of the restored republican sovereignty, he took part in the debates that gave rise to constitutional laws and contributed to the passing of the Walloon amendment on the 28th January 1875. Léon Gambetta then concentrated on promoting the new regime during the electoral ballot campaign of January and February 1876. In Bordeaux (13th February), he outlined the reforms necessary: the separation of the Church from the State, the creation of income tax, the reestablishment of the right to meetings and associations, a measure that he overturned at "opportune" moments for fear of upsetting the rural electorate, who were the demographical majority. The ballot of the 20th February sanctioned his work. Gambetta was elected in several districts and opted for Belleville. Marshal de Mac-Mahon, however, did not call him into his ministry. He preferred figures who were further "to the right". Gambetta took advantage of the crisis that arose from the constitution of the de Broglie ministry to unite the Republican vote and cause the dissolution of the Chamber - it was to be his only victory in his unsuccessful attempt to unite the parties to the left.
A tactician and orator of the highest order, Gambetta made the summer electoral campaign his own, before pronouncing in his speech in Lille (15th August) directed at the President of the Republic, the phrase "accept or resign", a remark that would earn him a conviction of three months in prison, a sentence that he would not serve. Having acceded to "republican sainthood", he preferred however to promote Jules Grévy on the 3rd September to the position of head of State and remain in the background. Political crises followed: Gambetta stood against Marshal de Mac-Mahon with vehemence. He ended up securing his resignation, the latter having refused to sign the decree to lay off ten generals of the army corps (20th January 1879). Refusing once more to head the regime, Gambetta let Jules Grévy succeed Mac-Mahon and contented himself with the presidency of the chamber (31st January 1879). From a symbolic role which he carried out elegantly, Gambetta, who in the eyes of President Grévy no longer represented a political obstacle, rose to the presidency of the council on the 10th November 1881. He thus finally believed it possible to turn France into a stable and peaceful country, reunited around the republican way of thinking. The new head of State tried to establish a large ministry, uniting all of the important figures from the "left". Jules Ferry, Léon Say, Henri Brisson and Charles de Freycinet and the heads of various movements all refused the offer. His government had barely been formed (on the 14th January 1882) when it was toppled after 74 days, following a legislative bill on the ways of appointing senators and electing representatives to the chamber. Freycinet succeeded him, surrounded by those very people who had refused to give him their support.

Léon Gambetta then withdrew from politics. He settled in the Nice area, no longer taking part in debates except for the one on the 18th July 1882 requesting that French presence be maintained in Egypt. Retired to les Jardies (Ville-d'Avray), with his companion Léonie Léon, Gambetta was the victim of a fire arm accident that confined him to bed for the whole of November. This inactivity was fatal for him. He died on the 31st December 1882 following an intestinal infection and appendicitis that was not operated upon. A republican hero, the founding "father" of the Third Republic, Léon Gambetta was an incontrovertible key figure in "helping to understand that a regime that was initially modern and popular, that of Napoléon III, could be replaced by a republic that added to these same qualities, the quality of deep liberalism" (M. Aghulon). His state funeral was held on the 6th January 1883. Monuments were erected to him throughout France: in Bordeaux (25th April 1905), Nice (25th April 1909), etc. The one erected in the Tuileries gardens would disappear under the German occupation.