On 14 July 1866, the Vauban monument committee met with Bartholdi in Avallon and immediately adopted the initial project for the memorial designed by the sculptor.

“The festivities for the inauguration of the statue of Vauban in Avallon were a solemn occasion. The previous day’s rains had stopped, the morning clouds were moving off, and warm autumn sunbeams illuminated the scene, reddening the enchanted surrounding landscapes, when the features of the great man whose memory was being honoured appeared.

Starting on Saturday, the town was full of visitors braving the inclement weather. On Sunday, around noon, a convoy arrived from Auxerre that was big enough to form a crowd all by itself. It brought public officials, members of Parliament from the Yonne department, mayors, general councillors, and everyone who felt it was their duty to take part in this sort of departmental federation.

The population of Avallon came out to greet them, with an official welcome given by the head of the municipality, Mr Mathé, whose dignified, simple, modest attitude was so worthy of a magistrate of the Republic. At around two o’clock, a procession left the town hall for the sub-prefecture to gather the government representatives. The inauguration ceremony began with a speech by Mr Raudot, President of the commission for erecting the statue (...) But it was the role of the plebeian mayor of the town of Avallon to highlight what is perhaps the greatest glory of Vauban, and Mr Mathé did just that with a most elevated mindset. In the name of the people and as a man of the people, he returned to Vauban his purest and highest glory, that of having studied social evils, to have bemoaned them in his own grandeur and to have sought remedies for them. Mr Mathé’s speech was greeted with repeated, heartfelt cries of “Vive la République!”

On 14 July 1866, the Vauban monument committee met with Bartholdi in Avallon and immediately adopted the initial project for the memorial designed by the sculptor and presented as follows to the mayor of the town: “the architecture is in harmony with the man’s character. The lines of fortification called the Vauban front are used. The general layout fits in with the decoration of your promenade, with the slopes of the square, without disturbing the monument’s symmetrical aspect.” But this unanimity came up against criticism from the Council of Civilian Buildings for which Félix Duban served as one of the representatives: “the details with which the author seeks to express Vauban’s genius give off, if we may say so, something rather childish, forced. This should be banished from a monument erected in memory of a man such as Vauban. Strength and simplicity would seem necessary here to characterise the merits and qualities of the personality being presented.” In January 1867, he advised the elected officials of the municipality of Avallon “not to give their approval to the project submitted to them, to invite its author seek a simpler combination for the general layout and the location and, for the statue’s pedestal, shapes that are more sober and firm”.

Bartholdi gave in to the demands of this representative of the administration and in the end presented a statue full of commendable austerity, which was approved. It was cast by Barbedienne in 1872 and the monument was inaugurated, along with a section of railroad, on 26 October 1873.

The bronze statue was placed at the end of the Place d’Armes, which had become the Promenade des Terreaux in 1723. The Maréchal is still there today, with his left hand on his hip, the right holding a commander’s staff with one end resting on the attributes of the fortifications. The statue is three metres high and stands on a base of equal height in grey granite from Saint-Léger-Vauban, simply bearing the name of King Louis XIV’s famous Engineer.

Between the initial project presented in 1866 and the official inauguration in 1873, seven years had gone by. The disagreement with Félix Duban cannot alone explain this long delay; the Franco-Prussian conflict of 1870 changed the course of Bartholdi’s life. When the mayor of Avallon expressed is surprise at this delay, he gave this explanation: “After the war, weary with everything and finding my homeland Prussified, I decided to take a trip to the United States, where I had a longstanding invitation to come for art-related work...”.

Bartholdi nonetheless filled the order for the Burgundy town. He then took up another project, which was to be one of the most personal and most exciting of his life: the Lion of Belfort. On 5 December 1871, the city of Belfort announced a competition to erect a monument as “a testimonial in recognition of the victims of the siege of 1870-71” during which Denfert-Rochereau, atop the citadel designed by Vauban, valiantly distinguished himself.

Interestingly, for the record, Denfert-Rochereau was present at Avallon for the inauguration of the Maréchal’s statue, as reported in the l'Yonne newspaper of 28 October 1873: “The guest who was celebrated the most by all was Colonel Denfert, the heroic defender of Belfort, whose presence at this solemn occasion must have been saluted by the shadow of Vauban. The dead hero had been honoured; Denfert brought him back to life with a toast to the instruction of the people, who will produce the Vaubans of the future (...). The banquet ended with a speech by M. Lepère, whose role as President of the Departmental Council was to sum up all the fine words that had been pronounced, making a connection between Vauban’s work and the Revolution of 1789 in a summary of the mood of this lovely day.

Statue of the Maréchal de Vauban 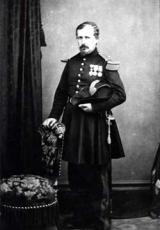