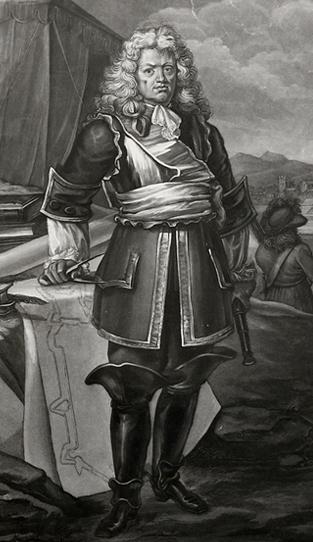 Sébastien le Prestre de Vauban was born the 4th of May 1633 in the region of Morvan, in Saint-Léger-de-Focheret. At the age of eighteen he became a cadet in the regiment of Condé. It's the period of the "Fronde of Princes" (The Slinging of Princes) animated by Louis de Bourbon, also known as ?The Great Condé?. He wan, during the rebellion, against queen Anne of Austria and her Prime Minister Cardinal Mazarin, in Recroi in 1643. After the arrest of Condé in 1650, Vauban joined Mazarin and the young king Louis XIV. He leads his fist city siege in Argonne. Then, thanks to his studies, he will be proclaimed king's engineer in 1655. Joining theory and practice he works very hard to improve the forts defences following the footsteps of Henry's IV engineers of fortifications (les Errard, Chastillon, de Beins, de Bonnefons). He improves, invents, implements; in 1705 he also writs a thesis about the attacks of the fortresses. He is appointed general Lieutenant in 1688. The Marshal of France gives him his honours the 14th of January 1703. He devotes his entire carrier to the king and his kingdom : he builds or restores more than 300 fortresses, leads more than 50 sieges; some of his conquers are famous: Tournai, Douai, Lille, Maastricht, Mons, Besançon, Namur, Luxembourg, are some examples.

From 1673 he will fortify the kingdom which he will call "le pré carré". In Flandres and in the north, in Ardennes, Alsace, Rhénanie, in Franche-Compté, the Alps, Brittany, Roussillon, without forgetting the maritime front, all these locations have been fortified by Vauban. He created fortified places in Lille, Besançon, Belfort, etc. He was a builder, a town planner, an engineer of the armament, a strategist and tactician, a manager, an economist and a civil engineer. In 1707 he publishes his project about the royal tithe, recommending a single tax. In 1689 he also wrote a report disapproving the Revocation of the Edict of Nantes, in the name of the freedom of conscience. Exhausted by a life of immense work he dies the 30th of March 1707 in Paris. His body rests in the church of Bazoches ( Nievre ), close to the castle he acquired in 1675, his heart is deposited, since the 28th of May 1808 in the church of the Dome, in Invalides. It was Napoleon's decision to transfer it to Paris.

" After God the King is my great example and I will always carry out with joy every order he will give me. Even if I would have to pay with my own life. " Vauban , letter of Vauban to CHAMILLART, Paris, 16th of January 1706. Besiege city by Vauban : besieged city. City defended by Vauban, impregnable city.