Verdun, a site of Franco-German remembrance

On 29 May, the official centenary ceremony of the Battle of Verdun took place. While Verdun remains the symbol of the extreme violence of the First World War, the site should also be regarded as an important site of European remembrance. 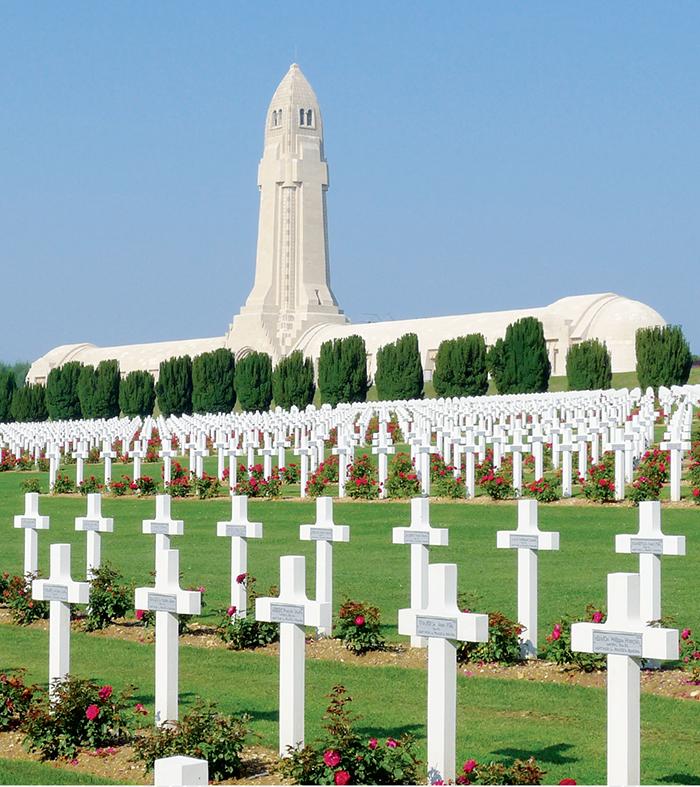 VERDUN, A SYMBOL OF EUROPEAN RECONCILIATION

Officially opened on 21 February 2016 - the anniversary of the start of the battle - the Battle of Verdun commemorative cycle was one of the most emblematic events of the First World War centenary celebrations. The high point of this commemorative season was 29 May: the official ceremony held on the battlefield, with senior French and foreign officials in attendance.

This international ceremony was attended by the French president, François Hollande, the German chancellor, Angela Merkel, and a large number of mayors and local councillors representing the areas ravaged by the bitter fighting and which contributed to the reconstruction of Verdun. The ceremony was the culmination of several days of commemorative events held in Verdun and on the battlefield, which saw the participation of the families and descendants of servicemen from the two countries who fought in this terrible battle.

For the Battle of Verdun remains deeply embedded in the minds of French families and in the French collective consciousness. And it's no wonder, when close to 700 000 French and German soldiers were killed, wounded or went missing in ten months of fierce fighting. Verdun very nearly changed the course of the war. The French narrowly prevented the collapse of the front. What could come out of such carnage? What hope was left after so many had died? How could so much suffering and so much hate be consigned to the past? Yet Verdun is today a powerful symbol of Franco-German reconciliation. The site, which still bears the scars of the conflict, is a testament to the capacity of nations to transcend their past antagonisms and people's capacity to put behind them the sorrows inflicted upon one another. Verdun demonstrates how peace, too, can be won.

The setting for many gestures of friendship between France and Germany going back as far as the interwar years, Verdun is where the reconciliation of these two warring nations was enacted. In 1936, 30 000 French and German ex-servicemen made a joint oath on the battlefield. In 1966, on the 50th anniversary of the Battle of Verdun, the Book of Peace was unveiled at the town hall and signed by General de Gaulle. That day, Verdun became the “Capital of Peace”. On 22 September 1984, before Douaumont Ossuary, President

François Mitterrand and Chancellor Helmut Kohl stood hand in hand above the tombs to seal a renewed entente. The ceremonies of 29 May also invoke this “shared memory”. For Verdun and its battlefield have become a universal tourist destination. While German tourists make up nearly 40% of visitors, visitor numbers to these memorial sites reveal the development of international tourism, in proof of the growing interest in this important place of remembrance.

Celebrating the Verdun centenary offers an opportunity to rediscover the tourism heritage of the Meuse. Wherever you look, this territory so fiercely contested by the warring nations reveals evidence of the conflict: cemeteries, memorials, ruined villages, wartime fortifications, landscapes shaped by shelling.

Of the 18 national cemeteries on this battlefield, the most emblematic is that of Fleury-devant-Douaumont, which was entirely renovated for the First World War centenary. Covering an area of 144 000 sqm, this vast cemetery contains more than 16 000 graves. On the same site, 500 metres to the north, is the Bayonet Trench, where the seven infantrymen who died in the bombardments of 1916 lie buried, beneath an imposing concrete memorial. The memorial's monumental gate is the work of artist blacksmith Edgar Brandt, who also made, in 1923, the bronze torch in which the Flame of Remembrance flickers, above the Tomb of the Unknown Soldier at the Arc de Triomphe. The town of Verdun is home to the World Peace Centre, and also the Victory Monument, unveiled in 1929. At the top of this 100-foot tower is the statue of a warrior, resting on his sword and looking east.

Five miles outside the town lie the ruins of the forts of Vaux and Douaumont, powerful fortifications of the stronghold of Verdun, which saw many fierce and bloody battles. Both are open to the public. These ruined forts are a testament to the suffering experienced on both sides by French and German combatants at Verdun.

At Vaux-devant-Douaumont, the Verdun Memorial puts visitors at the heart of the battleground, enabling them to get a better idea of what day-to-day life was like for soldiers on the front line, as well as to see the impact the battle had on the surrounding landscape. These widely different memorial sites offer the opportunity to gain a clearer understanding of the Battle of Verdun in all its aspects and all its excesses.

In this context, the commemorations paid tribute to all those who fought in the battle. Over three days, from 27 to 30 May 2016, the town of Verdun and the Greater Verdun area held a whole series of cultural and memorial events for local people and visitors.

After the inauguration of the Verdun Memorial, François Hollande and Angela Merkel presided over the official ceremony marking the centenary of the Battle of Verdun, in Douaumont. At the ceremony, a commemorative plaque was unveiled in the ossuary.

Supervised by 300 young people from the Civic Service and the Franco-German Youth Office, 3 400 schoolchildren from all over France and Germany attended all of the ceremonies. The French President and German Chancellor then relit the Flame of Remembrance in Douaumont Ossuary, celebrating the “spirit of Verdun” and shaking hands while the bell tolled.

The activities, the spectacle and the moments of contemplation enabled all those present to join in the tribute paid to the soldiers, reaffirm and celebrate the renewal of friendship, and confirm Verdun as the “World Capital of Peace”.