The Senegalese tirailleurs in the Battle of France

In both the First and Second World Wars, France called on its empire. Elements of its colonial forces, among them Senegalese tirailleurs, took part in the Battle of France in 1940.

The fighting of the tirailleurs 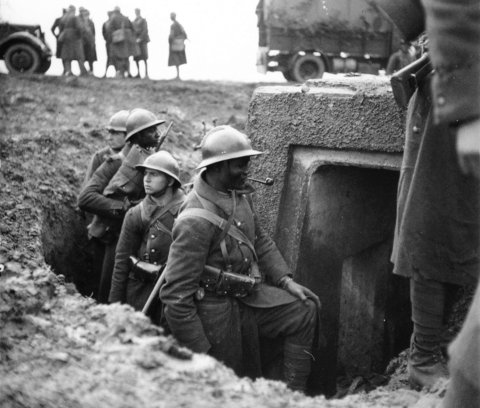 Senegalese tirailleurs from a mixed unit in action in Alsace, September-December 1939. © ECPAD

On the eve of the Second World War, six Regiments of Senegalese Tirailleurs (RTS) were stationed on metropolitan French soil: the 12th RTS at La Rochelle and Saintes, the 14th RTS at Mont-de-Marsan and Tarbes, the 4th RTS at Toulon and Fréjus, the 8th RTS at Toulon and Marseille, the 16th RTS at Montauban, Cahors and Castelsarrasin, and the 24th RTS at Perpignan and Sète. They were assigned to the 1st, 2nd and 4th Colonial Infantry Divisions (DIC); the 3rd DIC had no African or Malagasy personnel. From September 1939 to May 1940, the colonial troops were reorganised. Three new divisions were created, comprised of reservists: the 5th, 6th and 7th DIC. In April 1940, with reinforcements from Africa, two new regiments – the 25th and 26th RTS – were created, which would form the 8th DIC. The 9th DIC, undergoing training in the south, could not be mustered, so its elements were deployed locally. 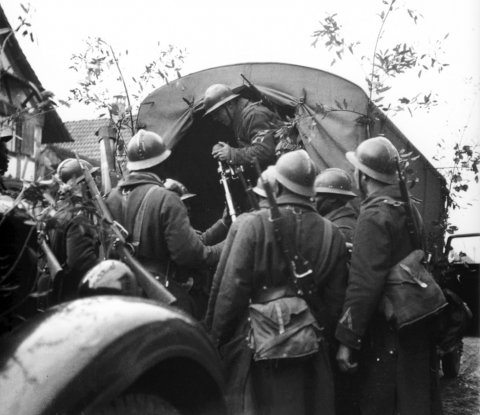 Senegalese tirailleurs climb aboard a lorry in Alsace, September-December 1939. © ECPAD

On the eve of the German offensive, therefore, the French high command had eight Colonial Infantry Divisions on the Western Front. The Senegalese were incorporated along with members of the colonial infantry and artillery regiments. The 4th, 8th, 14th, 16th, 24th, 25th and 26th RTS and some battalions of the 12th RTS were sent to the front. Elements of other corps were assigned to regiments comprised of mixed battalions and companies: the 5th, 6th, 27th, 28th, 33rd, 44th, 53rd and 57th Mixed Senegalese Colonial Infantry Regiments (RICMS). Most of these regiments took part in operations as part of the colonial divisions; following their annihilation in the fighting of May-June 1940, the survivors joined other units. As of 1 April 1940, an estimated 179 000 Senegalese were mobilised, with some 40 000 engaged in the fighting in metropolitan France. 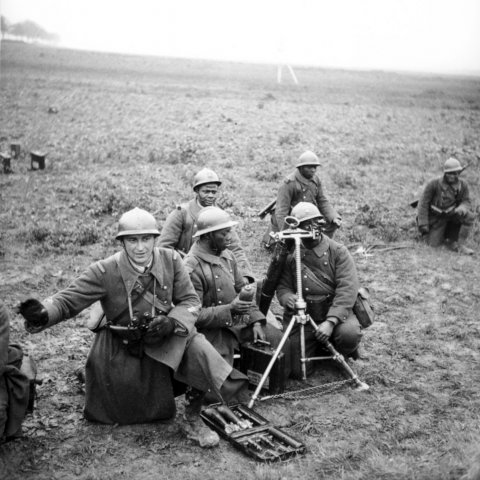 Deployed across all sectors of the front – the Ardennes, the Somme, the Meuse, the Aisne, Champagne, the Loire and the Rhône – the Senegalese fought fiercely, often against better equipped German formations. 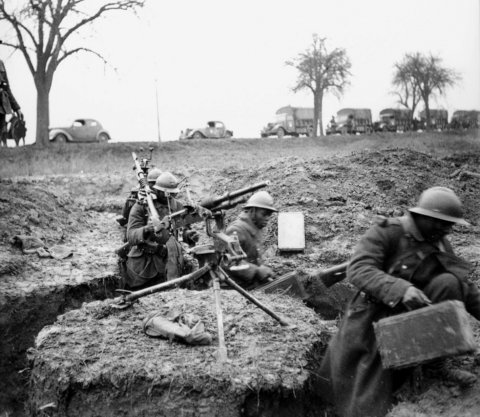 The 1st and 6th DIC were deployed in Argonne. The 12th and 14th RTS fought in the Ardennes and on the Meuse (fighting at Beaumont, Brillon and Bourmont). When they retreated to the Vosges, these tirailleurs were taken prisoner to the south of Sion, between 18 and 21 June. The 5th RICMS was practically annihilated in fighting in the Ardennes (La Berlière and Vouziers), then at Tilloy and Bellay, while the 6th RICMS fought tooth and nail to defend its position north of Grand Dieulet wood, then in the forest of Belval.

The 4th, 5th and 7th DIC took part in the defence of the Somme. Arriving in this sector on 16 May, the 16th and 24th RTS engaged in fierce fighting at Fouilloy, Villers-Bretonneux and Aubigny. They were annihiliated on 10 June, near Erquinvillers, in the Oise. The 44th RICMS, in conjunction with the 53rd RICMS, sustained the German attacks on the south bank of the Somme at Le Quesnoy and Hangest, while the 53rd RICMS resisted desperately for three days at Airaines. The 33rd and 57th RICMS took part in all the fighting against the German bridgehead at Amiens (fighting at Saleux and Dury). 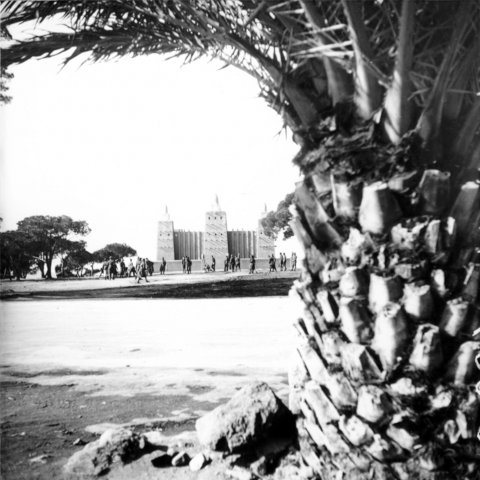 View of the Senegalese camp at Fréjus, February 1940. © ECPAD

Other units, like the 27th and 28th RICMS, distinguished themselves in Normandy, where the 44th RICMS attained distinction at Vernon, and also in the Loire and Lyon regions and in the defence of the Mediterranean coast. The 8th RTS defended the Seine and the Yonne, in the Moret area, before retreating to the Loire, then the Cher – where it engaged in stalling attacks – the Creuse and the Vienne. The 26th RTS defended the Seine and the Eure. After distinguishing itself at Feucherolles, where it was tasked with containing the Germans to cover the retreat of the other divisions, it was forced to retreat to the Loire, the Indre, the Creuse, then the Dordogne. The 25th RTS, detached from the 8th DIC and stationed in reserve to the Army of the Alps, was engaged in the Chasselay-Montluzin area, in operations aimed at checking the progress of German troops advancing on Lyon. The 4th RTS participated in the defence of Menton against Italian troops.

The Autonomous Battalions of Senegalese Tirailleurs (BATS) were created in April-May 1940. These were deployed on the northeast front – the 17th (sectors of Salbris, then Vierzon, when the troops retreated to the Loire and the Cher), 19th and 22nd BATS – or to defend the Mediterranean coast, like the 13th or 14th BATS (Voreppe area). 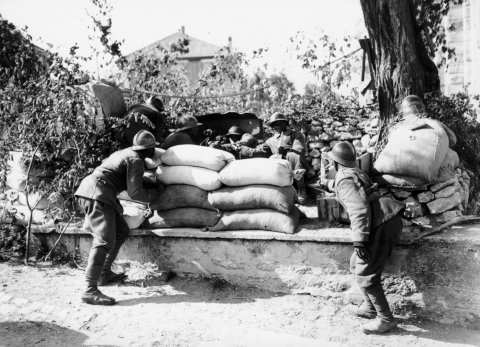 Besides the severe losses suffered during this fighting, the Senegalese tirailleurs were also the victims of terrible reprisals by German troops. These took the form of summary executions of prisoners, right there on the battlefield. A number of cases have come to light, for instance that of the Senegalese of the 53rd RICMS at Airaines, in the Somme: on 7 June 1940, Captain N’Tchoréré, commander of 7th Company, and the survivors of his unit, were forced to surrender after stubbornly defending their position and exhausting all their means of defence; they were immediately executed by the enemy. On 19 and 20 June, nearly 200 Senegalese prisoners of the 25th RTS were shot dead in the Lyon area (Montluzin, Chasselay, etc.). There are many other examples, in Côte-d’Or, Oise, etc.

Tirailleur losses are estimated at nearly 17 000 men. Meanwhile, after the armistice, some 15 000 Senegalese tirailleurs fell into the hands of the enemy, who interned them in France in camps known as Frontstalags. Many could not cope with the conditions of internment and fell ill; they were freed and handed over to the French authorities, who took over their custody until Liberation. Some succeeded in escaping, to join the ranks of the Resistance. Belonging to many maquis – most notably in Vercors, where they even formed a “Senegalese squadron” within a cavalry regiment, the 11th Cuirassiers – they also distinguished themselves in the fighting for Liberation. 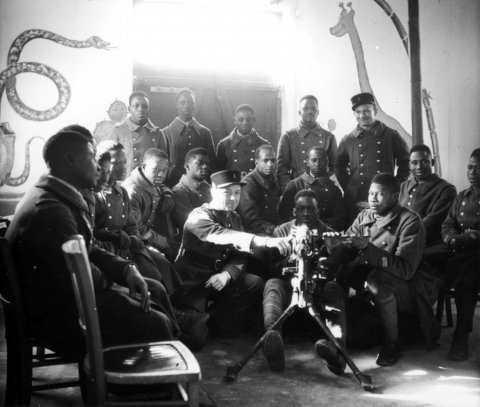 For their bravery and effectiveness in the Battle of France, the Senegalese tirailleurs received a host of individual and group decorations and citations. Among many others, the 1st Battalion, 6th RICMS, and the 53rd and 57th RICMS received citations from the army. The flag of the 53rd RICMS received the inscription “Airaines 1940”, an outstanding achievement since so few inscriptions were awarded for the Battle of France. 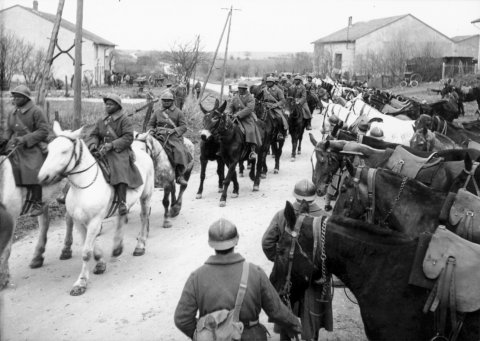 10 May 1940: Germany launches its offensive in the west: invasion of the Netherlands, Belgium and Luxembourg.

15 May 1940: Paul Reynaud announces to Winston Churchill that “the battle is lost”; the Dutch army surrenders.

19 May 1940: General Weygand replaces General Gamelin as commander-in-chief of the French Army.

5-8 June 1940: The Germans break through the last French defensive lines on the Somme and the Aisne.

10 June 1940: Fighting at Vernon; Italy enters the war alongside Germany.

14 June 1940: German troops march on Paris, which is declared an open city.

History of the Senegalese tirailleurs:

The first black soldiers to serve France were trusted former slaves, known as laptots, recruited in the 18th century to provide security on the vessels of the French East India Company that traded with Africa.

The Senegalese Tirailleurs Corps was founded in 1857 by a decree of Napoleon III. From that date until their extinction in the 1960s, the tirailleurs participated in all the colonial campaigns fought by France. They fought in sub-Saharan African in the late 19th century, and 150 took part in the Congo-Nile expedition led by Jean-Baptiste Marchand (1896-99). They also fought in Morocco (1912-34). 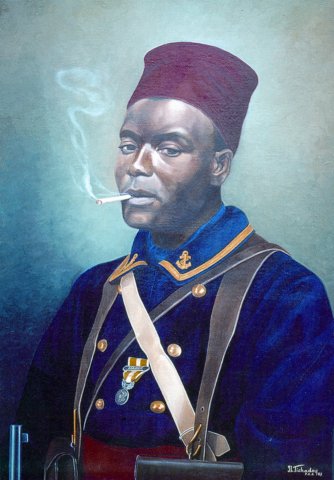 The Senegalese tirailleurs played an active role in the defence or reconquest of French territory in the two world wars. Between 1914 and 1918, of the 161 250 tirailleurs recruited, 134 000 fought in different theatres of operations, in particular in the Dardanelles and on the Western Front, at Verdun or on the Somme (1916), while the others served overseas as “sovereignty troops”. In the Second World War, they took part in the Battle of France, in 1940, in all the fighting engaged in by Free France, in particular in Gabon (1940) and at Bir Hakeim (1942), and in the Provence landings with the French 1st Army (1944). 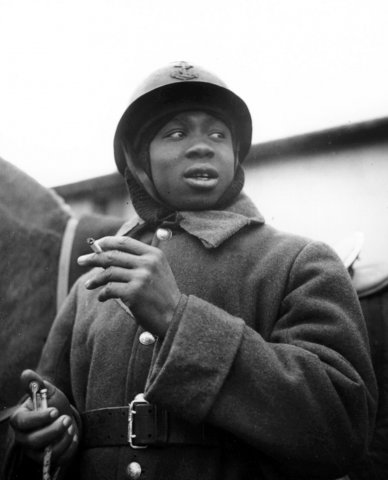 In 1958, the Senegalese tirailleur regiments were transformed into Marine Infantry Regiments, before finally being extinguished between 1960 and 1962.

To the Senegalese soldiers who died for France

Softening the breasts of virgins

Awakening the dead under a maternal earth.

They put flowers on tombs and warm the Unknown Soldier.

But you, my dark brothers, no one calls your names.

They promise five hundred thousand of your children the glory of future deaths and thank them in advance, future dark dead.

Listen to me, Senegalese soldiers, in the solitude of the black ground and of death

In your deaf and blind solitude, more than I in my dark skin in the depths of the Province,

Without even the warmth of your comrades lying close to you, as in the trenches back then or the village palavers long ago.

Listen to me, black-skinned soldiers, though you are without eyes or ears in your triple casing of night.

We have not hired mourners, nor even the tears of your former wives.

They only remember your great fits of anger, and prefer the ardour of the living.

Too clear are the mourners’ laments

Too quickly dried are your wives’ cheeks, as the gushing Fouta in dry season,

The hottest tears too clear and too quickly drunk from the corners of forgetful lips.

We bring you, listen to us, we who spelled your names in the months of your deaths, we bring you,

In these fearful days without memory, the friendship of your age-mates.

Ah! If I could one day sing in a voice glowing like embers, if I could praise

The friendship of comrades as fervent and delicate as entrails, as strong as tendons.

Listen to us, you Dead stretched out in water as far as the northern and eastern fields.

Receive this red earth, under a summer sun this soil reddened with the blood of white hosts

Receive the salute of your black comrades, Senegalese soldiers

WHO DIED FOR THE REPUBLIC! 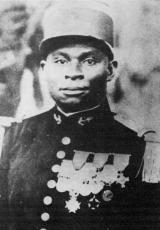