History of the Senegalese tirailleurs

The Senegalese tirailleurs were colonial infantry recruited in sub-Saharan Africa. The first black soldiers to serve France were trusted former slaves, known as laptots, recruited in the 18th century to provide security on the vessels of the French East India Company that traded with Africa.

The Senegalese Tirailleurs Corps was founded in 1857 by a decree of Napoleon III. From that date until their extinction in the 1960s, the tirailleurs participated in all the colonial campaigns fought by France. They fought in sub-Saharan African in the late 19th century, and 150 took part in the Congo-Nile expedition led by Jean-Baptiste Marchand in 1896-99 to contest British hegemony. They also fought in Morocco (1912-34). 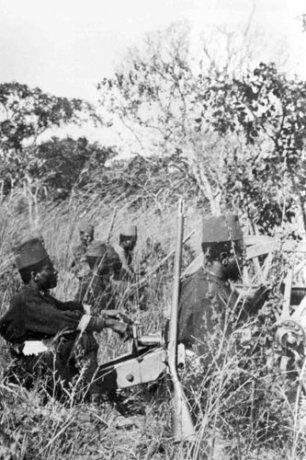 The Senegalese tirailleurs played an active role in the defence or reconquest of French territory in the two world wars. Between 1914 and 1918, of the 161 250 tirailleurs recruited, 134 000 fought in different theatres of operations, in particular in the Dardanelles and on the Western Front, at Verdun or on the Somme (1916), and on the Aisne in 1917, while the others served overseas as “sovereignty troops”. In the Second World War, they took part in the Battle of France, in 1940, in all the fighting engaged in by Free France, in particular in Gabon (1940) and at Bir Hakeim (1942), and also in the Provence landings with the French 1st Army (1944). 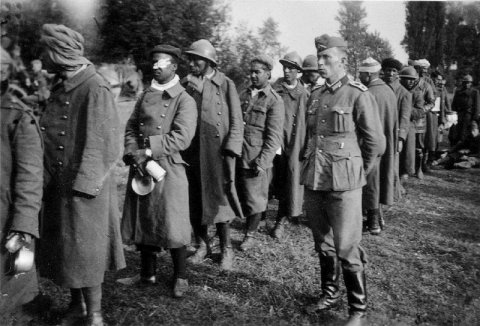 Tirailleurs also participated in the two major wars of decolonisation, in Indochina (1945-54) and Algeria (1954-62). In 1958, the Senegalese tirailleur regiments were transformed into Marine Infantry Regiments, before finally being extinguished between 1960 and 1962.

To the Senegalese soldiers who died for France

Softening the breasts of virgins

Awakening the dead under a maternal earth.

They put flowers on tombs and warm the Unknown Soldier.

But you, my dark brothers, no one calls your names.

They promise five hundred thousand of your children the glory of future deaths and thank them in advance, future dark dead.

Listen to me, Senegalese soldiers, in the solitude of the black ground and of death

In your deaf and blind solitude, more than I in my dark skin in the depths of the Province,

Without even the warmth of your comrades lying close to you, as in the trenches back then or the village palavers long ago.

Listen to me, black-skinned soldiers, though you are without eyes or ears in your triple casing of night.

We have not hired mourners, nor even the tears of your former wives.

They only remember your great fits of anger, and prefer the ardour of the living.

Too clear are the mourners’ laments

Too quickly dried are your wives’ cheeks, as the gushing Fouta in dry season,

The hottest tears too clear and too quickly drunk from the corners of forgetful lips.

We bring you, listen to us, we who spelled your names in the months of your deaths, we bring you,

In these fearful days without memory, the friendship of your age-mates.

Ah! If I could one day sing in a voice glowing like embers, if I could praise

The friendship of comrades as fervent and delicate as entrails, as strong as tendons.

Listen to us, you Dead stretched out in water as far as the northern and eastern fields.

Receive this red earth, under a summer sun this soil reddened with the blood of white hosts

Receive the salute of your black comrades, Senegalese soldiers

Who died for the Republic!