1962: the French exodus from Algeria

Is sixty years enough, not only to remember without hurt, but, more importantly, to subject to the scrutiny of human reason a dramatic story of hatred and passion, contempt and impotent love, which shook and goes on shaking up people’s memories? Algeria is to celebrate 60 years of independence, and it is legitimate that it should do so. Pieds noirs and repatriated French Muslims seek to remember, to comprehend the incomprehensible: why did they leave under such circumstances?

1962 saw one of the biggest waves of migration of the 20th century in the Mediterranean. It involved nearly one million people; 800 000 of them fled their native Algeria, where it was no longer possible for them to live; 120 000 went on believing, at the cost of many return journeys, in a multi-ethnic, multi-denominational Algeria, before they, too, over the following two or three years, left “their” Algeria for good.

These “repatriations” were nothing new: every decolonisation has led to repatriation, whatever the colonial power or the colonised country. Great Britain, the Netherlands, Belgium, France and Portugal, to mention only the biggest “colonisers”, submitted to it, not without difficulties. In France, however – and later in Portugal – there was something quite distinctive about the repatriations, due to the unique circumstances in which they occurred. Let us acknowledge that almost all these movements followed on from violent crises which confronted the French State from 1954 to 1962. The First Indochina War, the end of the protectorates in Morocco and Tunisia, the Suez and Bizerte crises and the Algerian War all express the brutality of the transitions and the violence of decolonisation. Concerns and insecurities, fears and suspicions came to prominence in the minds of the communities, and the “overseas” French were fearful of independence.

If we look closely, nearly all exits took place in a climate of fear or, at best, of suspicion tinged with apprehension. How to escape violence that was predictable yet unsuspected by either side? How to leave behind one’s native country, everyday affairs and modest belongings, most commonly of sentimental value? Obviously, we are talking here of those who left in a hurry: “Indochinese” after the French Army retreated to Hanoi, then Haiphong; “Moroccans” after the events of Oujda in 1953, Khenifra and Khouribga in 1955, and Meknes in 1956; “Tunisians” after Bizerte; “Egyptians” after Suez; up to the great exodus of 1962 that surpassed all previous figures. 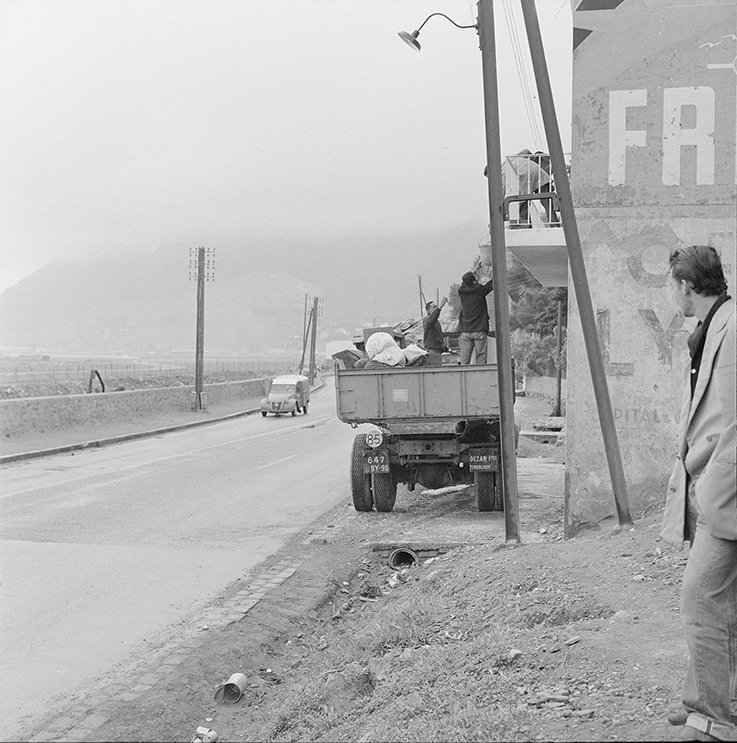 The Évian Accords signed on 18 March 1962 were supposed to put an end to a war that no one wanted anymore, with the cessation of violence at noon on 19 March. They banned all acts of individual and collective violence and all clandestine activities against public order, established the sharing of power between a French high commissioner and a provisional Algerian executive, and provided for economic, financial and cultural cooperation between the two countries. No sooner had they been signed than these agreements were challenged by the OAS, the ALN general staff and the FLN itself, having agreed to and signed them. The form taken by those challenges meant that Algeria was stricken with fear verging on frenzy, at least in the coastal towns and cities; the interior, from which the French Army was progressively withdrawing and the settlers fleeing, was firmly in the grip of the ALN, which made its own laws. Now, the most radical expressions of violence were seen in the cities: Oran, Bône and, of course, Algiers.

Fear, apprehension and hostilities were heightened by mass demonstrations, the French military presence and FLN terrorism, which affected all communities. The founding of the OAS and the actions of its Delta and Z Commandos, or of individuals identifying with it, added a new dimension to a daily terror to which, appalling as it may seem, people were becoming accustomed.

From April 1962, the watchword was depart, flee this situation that made people feel, once again, like they were at the centre of the war. Flee to France, which had abandoned them – but how? Some left discreetly, leaving washing out on the balcony to make it look as if they were still there; but for most it was a headlong flight, with its fair share of anxieties: the fear of being stopped by FLN roadblocks, the difficulty obtaining a ticket, the final waiting on the quay or in the airport terminal. The first feeling of relief came with boarding; the second, upon setting foot on French soil. But what awaited them on “the other side”?

When we think of the repatriation from Algeria, there come to mind images of crowded liners spilling thousands of people, exhausted by a distressing crossing, onto the quays of Marseille. These are real images and concern most people, since 54% “returned” by sea. However, 46% were repatriated by air, by means of a veritable airlift over the Mediterranean. These journeys had less of an impact on public opinion, as flight conditions were closer to those of an ordinary flight, i.e. less than two hours. But, just like the quaysides, the airport concourses of Maison Blanche in Algiers, La Sénia in Oran and Les Salines in Bône teemed with people, and some had to wait several days in difficult conditions before boarding. Up until mid-May, the ships – which had resumed service in rotation, in what seemed increasingly to be an endless convoy – were filled to capacity, or very slightly over. From that date forth, they were to accept far more passengers than the authorised limit. The vessels’ commanders exceeded the limits for the transport of troops, reaching maximum passenger capacity to the detriment of comfort and eliminating commercial cargo. The atmosphere of panic justified almost any act of imprudence. So it was that, on 12 June, 1 200 and 1 423 passengers set sail from Algiers aboard the Ville de Bordeaux and Ville d’Oran, vessels with a capacity of 1 000 and 1 241, respectively. And similar cases were seen over the following days with the Ville de Tunis, Sidi Mabrouk, Ville d’Alger and Sidi Okba. On 15 June, the Cambodge set sail from Algiers carrying 1 233 people (its capacity was 437!), as a firefight broke out on the quayside. The last days of June saw scenes still more intense than those previously witnessed in the port of Marseille. On 24 June, the Jean-Laborde arrived from Oran carrying 1 166 passengers instead of the permitted 400. “The next day,” wrote André Payan, then Special Commissioner for Ports in Marseille, “was the biggest of the big and sad days for the port; nothing even approaching the scale of it had ever been seen before.” That day, 25 June, the port received seven ships carrying a total of nearly 11 000 passengers: the Ville de Bordeaux with 1 503 (capacity 1 000), the Ville de Tunis 2 037, instead of the permitted 1 400, the El Djezaïr with 1 627 instead of 984, and the prize went to the Kairouan, commanded by Captain Miaille, which was carrying 2 630 people, instead of 1 172!

If the causes of the exodus had to do with the policy of decolonisation, the conditions of exile reflected reception planning. The government was counting on the repatriation of 400 000 people over four years, yet France was confronted by the disorderly influx of 800 000 people in an extremely short space of time (April-September 1962).

Local authorities and representatives of the State sought somehow to regulate the flow of migrants, but without any real success. Recourse to individual and private initiatives improved the situation slightly. But the fact remained that the reception of migrants was deficient – if not non-existent, or even hostile, as in Marseille, for instance. A second expression of this traumatic event, which is cemented in the memory of the “repatriated”, was: “we were not wanted”. And this concerned French people of European origin as much as French Muslims. The latter embarked in extremely difficult conditions and travelled by night to avoid being seen by the French. They were met by the army or charities and taken to reception camps, which consigned them to the margins of society and long-lasting invisibility. This repatriation was not a simple case of migration, therefore. The brutal uprooting, the exodus, the early days in France left psychological and emotional scars on a scale not grasped at the time. Inherent to these migrations was a sense of exodus and sometimes of exile, which meant that metropolitan France – the necessary motherland, essential to “repatriation” – lost much of its force. This led to migrants developing an idealised image of their home country, and the uneasy feeling of not being entirely at home in France. But the demographic reality, now better understood, was also masked: the French “colonials”, those being “repatriated” – and the “Algerian” example is the most captivating archetype – were a hugely diverse mix of people, often from opposing sides in colonial times (Spanish, Italians, Maltese, Germans, Swiss, Jews). And then there were all those who followed, often reluctantly, the movement of decolonisation: Moroccan and Tunisian Jews regarded as stateless, Egyptian Jews after Suez, right up to the “harkis”, whom France did not want, but who were as much “repatriates/expatriates” as the French of European origin[1].

Faced with this predictable, if unwanted, exodus, something had to be done. In late April, the government hastily set up five reception centres: in Marseille, the biggest, Paris, Bordeaux, Lyon and Toulouse. Plans were put in place to deal with the influx of migrants, which experts estimated at 100 000 for the whole of 1962. By the end of April, nearly 70 000 “repatriates” had already arrived; there would be a further 150 000 in May, and 480 000 in June! Nothing went according to plan; the reception centres were inundated, and by the end of May 1962 they could no longer operate. With the Mediterranean departments at breaking point, Bouches-du-Rhône in particular, the government decided to introduce a policy of intervention in place of its policy of relative freedom of settlement. From now on, coercive measures would be used to direct repatriates to regions where they clearly didn’t want to go or which were unfamiliar to them. Not only were we not wanted, but we no longer had freedom of movement. In the most overcrowded areas, the State failed in its duty – and that is what the pieds noirs remember.

So it is easy to see how traumatic 1962 was for them. The reality of the dramas and hardships experienced by repatriates derived from the fact that the loss of Algeria left them feeling profoundly uprooted. The accompanying distress was also the result of a long period of emotional tension – seven years of war – exacerbated by the discovery of a country of which they may have been nationals, but which they barely knew. The immediate impact of this uprooting was the loss of their material and emotional bearings. The home, village, neighbourhood, street, shopkeepers: all that comprised the fabric of everyday life was no more. Worse still, the loss of these objects of sentimental value was aggravated by the fact that, in France, a large proportion of the population thought that these “assets” had been acquired at the expense of the “natives”. This was doubtless true in some cases, but it is dangerous to generalise: the standard of living of the Algerian French was 15-20% lower than that of French people. Be that as it may, these often modest assets, now lost, became objects of shame. This feeling, coupled with insecurities over employment, housing and administrative red tape, would definitely leave its mark on the pieds noirs.

The “repatriation” of 1962 was not a simple case of migration. The uprooting, exodus and exile left psychological and emotional scars on a scale yet to be evaluated, which it was believed could be resolved through housing and employment priorities. To begin with, the inward and outward response of the pieds noirs was the cult of memory, followed subsequently by the fight for compensation and campaigns for recognition.

[1] I deliberately use the terminology of the period and would stress that Algerian Jews, who became French citizens in 1870, were considered “French of European origin” in the statistics, as opposed to “French of Muslim origin”. This was more the result of a colonial practice than religious practice.