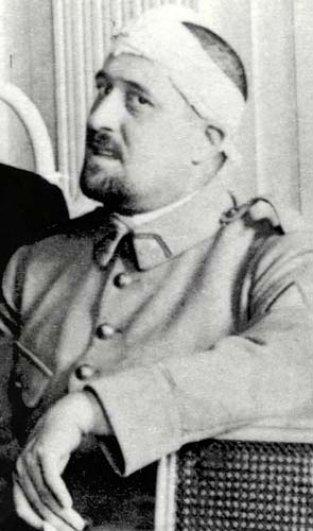 Apollinaire in the Italian hospital. 1916. Source: Historical library of the city of Paris

Born on the 26th August 1880 in Rome, Wilhelm-Apollinaris de Kostrowitzky was 18 years old when he arrived in the French capital before travelling to Germany as an advisor. Under the name Guillaume Apollinaire (his French Christian name), he soon became involved in the avant-garde literary movement. After having contributed to the Revue Blanche, in 1903 he founded his own review entitled Le Festin d'Esope. The cafés along the boulevard Saint-Germain and Montparnasse, the "Lapin Agile" cabaret and the "Bateau-Lavoir" artistes' workshop became popular meeting places with the likes of Picasso, Alfred Jarry, Vlaminck and Max Jacob etc. As well as his erotic works and art critiques for L'Intransigeant and Le Mercure de France, Apollinaire showed an interest in symbolic poetry. Derain illustrated his first book of prose, L'Enchanteur Pourrissant. In 1912, he was involved in founding the Soirées de Paris review. His break-up with Marie Laurençin, his partner since 1909, was the inspiration for his famous Pont Mirabeau.

"Under the Mirabeau bridge runs the Seine And our love affairs Must I be reminded that Joy always came after suffering."

The audacity of cubism, an important contemporary art movement, captivated Apollinaire, who defended it in his articles and sought to translate it into poetry, giving the latter a disjointed form. In 1913, following the issue of books on this pictorial school of painting, the publication of Alcools, which did not contain a single punctuation mark, made him famous.

In 1914, he shared in the cosmopolitan lifestyle of Montparnasse, spent time in Normandy and on the Côte d'Azur and was to meet Louise de Coligny-Chatillon, known as Lou, for whom he would write his famous letters. When the call-up came, he requested his naturalisation and on the 6th December he joined the 38th campaign artillery regiment in Nîmes. Transferred to the front in 1915, he fought in the Champagne region, where he was to become Sergeant.

On the front, he corresponded with Madeleine Pages, who became his fiancée, and with his wartime "Godmother", the Languedoc poetess "Yves Blanc". Naturalised in March 1916, he transferred to the infantry as sub-lieutenant in the 96th I.R.

On the 17th March at La Ville-aux-Bois in the Aisne he was suffered a serious head wound from an exploding shell, which led to two trepanations. Discharged and abandoning the idea of marrying, Apollinaire continued to write many poems - including Le Poète Assassiné - at the same time turning his interest to the theatre: on the 18th May 1917, the première of Parade, a ballet by Diaghilev, took place, to which he had contributed and for which he invented the term "surrealism". On the 24th June the première of a truly surrealist play, Les Mamelles by Tirésias, took place. At the same time he held conferences and worked on a cinema screenplay. On the 1st January 1918, suffering from a lung infection, he was taken to hospital. Once he recovered, he married Jacqueline Kohl on the 2nd May, whilst continuing his contributions to Temps and Paris-Midi and began writing two theatre plays and a farcical opera "bouffe" called Casanova. Calligrammes had already been published.

On the 9th November 1918, the poet, his body weakened as a result of his war injuries, died of Spanish influenza. His body was laid to rest in Paris, at Père Lachaise cemetery.