After the armistice of June 1940, the city of Grenoble, located in the unoccupied zone, quickly saw the first signs of what were to become the major resistance movements, Combat and Franc-Tireur. 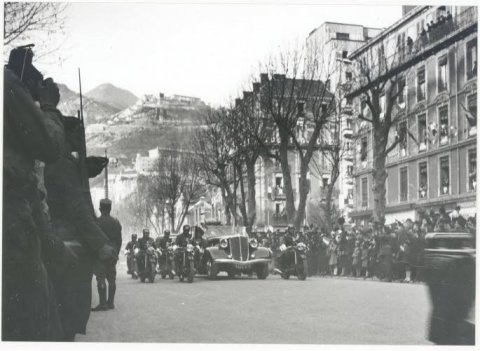 On 19 and 20 March 1941, Maréchal Pétain paid an official visit to Grenoble and was acclaimed on cours Gambetta, which was renamed in his honour. Source: Musée de la Résistance et de la Déportation de l'Isère.

Soon, in the spring of 1941, the National Front had also grown and underground newspapers such as Les Allobroges appeared. Part of the armistice army began hiding materiel and tonnes of ammunition. The city's population lost 840 residents who were shot by the Nazi, over 2,000 of its men were killed in combat; the same number of men were missing in action and there were 1,150 deportees, half of whom never came home.August 1941: five men with socialist ideas met at the Café de la Rotonde: Aimé Pupin (owner of the café), Eugène Chavant (former mayor of Saint-Martin d'Hères), Paul Deshières (railway employee), Eugène Féraffiat (auto mechanic) and Léon Martin (former mayor of Grenoble). They sought to reorganise the SFIO into a Resistance organisation. Source: La Résistance en Isère blog.

The University of Grenoble's professors provided support to the Resistance, while several of its services began producing fake ID cards, changing young people subject to the STO (Compulsory Work Service) into students starting in late 1942. Motivated by the local Franc-Tireur group, a maquis was also organised at the end of 1942 in the nearby Vercors and, thanks to the flow of young people who refused the STO, this maquis soon became a symbol of the French Resistance.
In November 1942, the city was occupied by the Italians and then, one year later, by the Germans. Most of the Resistance's activities focused on training and arming the young people who refused the STO and who little by little joined the rank of the maquis organised in the forests and mountains around Grenoble.

At the same time, on 11 November 1943, the anniversary of the armistice of 1918 gave rise to a nearly general strike - despite warnings from the Vichy government - and a demonstration in front of the local collaborationist offices. Emile Gilioli Memorial. Homage to the 398 Grenoble residents deported by the Germans during the demonstration on 11 November 1943. Source: La Résistance en Isère blog.

As a reprisal to this action, 395 patriots were deported. In reaction to this, the Francs-Tireurs blew up the Polygone artillery park on 13 November and suffered harsh repression that has lived on in people's memory as ”Grenoble's Saint Bartholomew's Day Massacre”. But on 2 December 1943, the Bonne barracks, used by the Germans as their new arsenal, were also blown up, while industrial and rail sabotages were on the rise.

The Normandy landing led to the high point in direct action by the resistance fighters in the Grenoble region, with many helping hands working to make things more difficult for the German troops, blocking the roads around the city. The landing in Provence on 15 August 1944 forced the Germans to abandon the city on 21 August, not without first massacring many prisoners at the Polygone, victims of the Gestapo. On 22 August 1944, Grenoble was liberated by the FFI and General de Lattre de Tassigny's army.


On 5 November 1944, General de Gaulle presented the City and seven of its residents with the Cross of the Order of Liberation. As mayor of Grenoble, Frédéric Lafleur received the Cross of the Liberation from General de Gaulle and in the name of the city, 5 November 1944, on place Pasteur. Source: Musée de la Résistance et de la déportation de l'Isère.

The city's population lost 840 residents who were shot by the Nazi, over 2,000 of its men were killed in combat; the same number of men were missing in action and there were 1,150 deportees, half of whom never came home.