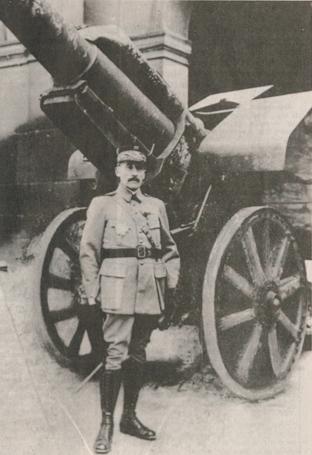 Louis Auguste was born in 1859 into a modest Catholic family in Metz, to Jean Louis (a gas-board employee) and Cornélie Joseph. The defeat of 1871 forced the Adrian family into exile, firstly in Saint-Omer, then Bourges and finally Tours (5 rue Sully). A brilliant scholarship pupil at the lycée Descartes, he passed the Ecole Polytechnique entrance exam in 1878. Attending the school inn 1880, he chose Engineering and took a year at the Applied Engineering School at Fontainebleau before being commissioned as a lieutenant with the 3rd Arras Regiment. Here is his physical description from the École Polytechnique former students' register: "Light brown hair - Ordinary forehead - Average nose - Blue eyes Average mouth - Rounded chin - Oval face - Height 170cm"

While a Captain in1885, he joined the General Staff in Cherbourg to work on the building programme for new barracks in the Manche area as well as the coastal defences. Garrison life took him to Saumur, Rennes and Granville, where in 1889 he married Marguerite Pigeon. In 1885 he organised and took part in the sending of the expeditionary corps to Madagascar. There he co-ordinated logistics: improving the road network, building bridges and camps. Exhausted by the climate and his service, he was repatriated in 1895, before being awarded the Croix de Chevalier de la Légion d'Honneur, aged 36, for acts of war.

Reformer of the Supply Corps

Adrian was seconded to the General Staff of the Paris right bank, then took the preparatory course for admission to the Supply Corps. In March 1898, whilst a quarter-master 3rd class, he oversaw the stores at Valenciennes as section head. He wrote articles for the Supply Corps review, on research and on the use of resources in the North and published an instruction manual for deputy stores officers. In 1900, he was appointed to the first supply depot in Paris as part of the Relief Service. The following year, he verified the accounts of the troop corps at the second stores in Vincennes, and taught trainee Supply Corps officers. Now 2nd class, he returned to Arras in July 1904. Appointed deputy director of supplies at the War Ministry, Adrian was then put in charge of tracking down fraud and corruption among army suppliers. To combat this, he put forward a new Supplies guide, which led to an improvement in living conditions for servicemen. This work earned him promotion to first class in December 1908, as well as his registration, on 20th July 1911, for consideration for the rank of Officier de la Légion d'Honneur for "outstanding service on the return to State control of Military Bed Suppliers" - he received his decoration on 31st December 1912. Accepted for early retirement at his request in 1913, he moved to the family home at Genêts (in the Manche département) before using his expert knowledge to assist cattle-rearers in Orinoco (Venezuela) with the production and conservation of beef. For this, he developed prefabricated huts that could be dismantled.

The "Head of Section for Improvisation"

Recalled at his request in 1914, he was drafted as an auxiliary civil servant to the Supplies Department in Beauce and Touraine. As deputy to the Supply Corps Director at the Ministry of War he was responsible for clothing and equipment, facing severe shortages. Responsible from September 1914 for recovering textiles from Lille, he managed to keep over 4,000 tonnes of sheets, fabric and wool from falling into German hands and organised the reprocessing of fabrics. After completing this mission, he planned the replacement of uniforms, reorganising textile production, and requisitioning uniforms from the fire and postal services. Fully aware of everyday events at the front, he took the initiative in supplying soldiers with sheepskin capes to ward off the rigours of winter. In 1915, he put forward a design for trench boots and his system of huts - proven in Venezuela - went on to replace the conical military tents. In August 1915, the construction of huts was transferred from Engineering to the Supply Corps. Adrian, anticipating the winter campaign, decentralised hut production and brought in contributions from more than two hundred businesses in order to manufacture 50 units per day.

The quartermaster and his helmet

The name Adrian will always be associated with the helmet worn by the Poilu. Trench warfare was fought using shrapnel shells. Three quarters of the wounded suffered head injuries of which 88% were fatal. Soldiers thus had to be issued with a light, protective helmet. Adrian thus developed a 0.5mm thick metal skull cap, to be fitted inside the képi to protect the skull from splinters of stone, bullets, etc. But this model, of which over 700,000 were made and distributed at the end of the winter of 1915, was judged to be insufficiently effective, despite protecting against 60% of shrapnel. On 21st February 1915, the Ministry of War, on the recommendation of General Joffre, decided to adopt a steel helmet for the infantry. Less than a month later, the "Dragon's Helmet" design put forward by military artist Georges Scott was chosen, but its overly complex manufacturing method delayed production, to the benefit of Adrian's prototype. To increase ballistic protection, Adrian looked a helmet based on a new concept that combined ease of production with effectiveness. In April 1915, the helmet comprising 700g of sheet steel was presented and accepted. 1,600,000 were ordered on 5th June 1915. Over 7 million were made in the first year alone. The helmet was so successful with the military that western armies ordered it en masse (Italy, Belgium, Serbia, Romania, Holland and Russia). In October 1915, Adrian was promoted to Commandeur de la Légion d'Honneur, in recognition of all his work.

An inventor at the service of soldiers In the Autumn of 1915, Adrian designed an abdominal protector against barbed wire and bayonets, and fitted back-pack straps with a stop to spread the load better and reduce wear from the belts. The quartermaster was also one of the men behind the Taxis de la Marne. Joffre and Gallieni would take up his idea of using automobiles to transport troops rapidly to the front.

Back to active service, the "saviour of Paris", the Grand Officier de la Légion d'Honneur In April 1916, a law on Supply Corps recruitment meant that quartermasters that took early retirement in peacetime and who had given outstanding service in wartime could be recalled. Thus appointed by the Decree of 17th May 1916, Adrian aroused resentment and jealousy. Among other things, the inquiry report accused him of illegal market dealings and of having patented his military inventions. At the end of 1916, Adrian's service was terminated and the construction of huts reverted to Engineers. In February 1917, Adrian was seconded to the testing, research and technical experimentation department of Under-Secretary for Inventions. Here he continued his work on protective armour, shrapnel goggles, the armoured turret for aircrew seats and the use of solar power. A second report stressed the importance of his service record and justified his actions given the exceptional circumstances. Appointed quartermaster on 26th June 1917, he was called upon by the Président du Conseil, Clemenceau, to lead the General Inspectorate of Quarters for the Government's Under-Secretary of State. The quartermaster controlled the army's supply services and, from April 1918, handled the department for Evacuees, Refugees, and Repatriated Deportees. His popularity increased still further when he used triangulation, based on shell impacts on Paris, to locate "Big Bertha" in the forest at Compiègne. The quartermaster was placed on the reserve list in 1918 by the Commission for Corps Rejuvenation. But the counter-enquiry led by Abrami, under-secretary of State, overturned the Commission's decision in December 1918, and reinstated the quartermaster to his duties as Inspector General in 1919. Louis Auguste Adrian was promoted to the rank of Grand Officier de la Légion d'Honneur on 16th June 1920. Unwell, he retired to his Normandy residence at Genêts and died in Val-de-Grâce hospital in August 1933.