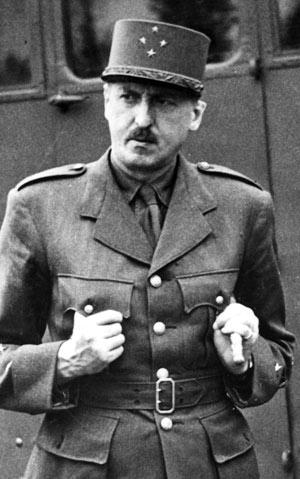 An exceptional man, a soldier who rose through the ranks who "will belong forevermore belong to history" (Michel Debré) ...

From an old family from the Alsace and the son of an organ maker, Pierre Koenig was born on the 10th October 1898 in Caen (Calvados). He was educated by the brethren of the Christian Schools. With his baccalaureate in his pocket, he enlisted voluntarily to serve his country and on the 17th April 1917 was appointed to the 36th infantry regiment (régiment d'infanterie or RI). Completing his training in 1918, he took part in the Battle of Flanders in May, the Battle of Matz in June and July, followed by the Oise offensive in August and September and the clash on the Ailette the following month. An exemplary soldier, he was cited in the Order of the Army on the 26th September 1918 and received the military medal. Once the war was over, Pierre Koenig decided to take up a career in the armed forces. He joined the 15th battalion of Alpine Chasseurs, serving in High Silesia and in the Ruhr (1919 to 1922), earning his lieutenant's stripes in 1920, before being transferred to the Alps (1922-1923). He then served as an information officer at the headquarters of the 40th and 43rd infantry division of occupation troops in Germany until 1929. After two years in the 5th RI in Paris, he was sent to Morocco as company commander of the 4th Foreign Regiment (1931-1934) to lead peacekeeping operations in the protectorate. On detachment to General Catroux in Marrakech, Captain Koenig led various inland operations when war broke out in September 1939.

In February 1940, he participated, along with detached units of the 13th brigade of the Foreign Legion (brigade de la Légion étrangère or DBLE) from North Africa, in the Norwegian expeditionary corps where he distinguished himself during the battles of Namsos. On returning to France, he witnessed the arrival of the Wehrmacht in Brest on the 15th June 1940. Not accepting the surrender of the French army, he decided to go to London with a few comrades from the 13th. He set sail on the 19th June from Saint-Jacut de la Mer, reaching the British coast on the 21st.

Promoted to Head of Battalion on the 1st July, he took part in the unsuccessful Dakar expedition with his comrades from the 13th DBLE and then in operation "Menace", taking back Gabon from the allies of the Vichy government in November, before being appointed Commander of Cameroon in December 1940. "Mutin", to use his war name, joined the FFL in the English-speaking Sudan the following month before taking the Levant territories at the beginning of 1941. Now Lieutenant Colonel, he was General Legentilhomme's Chief of Staff during the Syrian campaign and appointed as a delegate for the Free French at the Saint-Jean d'Acre Armistice Commission, following the surrender of General Dentz. Temporarily promoted to Brigade General, he worked on reorganising the Free French troops of the Levant.

Commander of the 1st light division of the FFL (or the 1st BFL), he joined the 8th British Army, fought in Libya, at Halfaya (December 1941 and January 1942), at Mechili (February 1942) and Bir-Hakeim (February-June 1942). He carried out his mission in the face of Rommel's Afrika Korps to "hold out at all costs, until our victory is decisive" (the message from Koenig to his troops on the morning of the 3rd June) for 14 days, from the 27th May until the 10th June 1942, allowing the British army to regroup at Alexandria: "by stopping the German advance, they [Pierre Koenig and his men] bought us some time, allowing us to bring troops from Palestine and cover Egypt" Winston Churchill acknowledged. General de Gaulle awarded him the Liberation Cross for this great wartime feat.

Preceded by his reputation, Koenig took part in the victory over troops of the axis at El Alamein in October 1942. Then, supporting General de Larminat, he led his troops in the conquest of Libya and Tunisia. At the beginning of August 1943, he carried out the role of Deputy chief of staff of the army in Algiers. His mission was to bring unity, easing the tensions between the North African and Free French troops. From March 1944, General Koenig arrived on the political and diplomatic scene: he was appointed as delegate for the temporary government of the French Republic (le Gouvernement provisoire de la République française or GPRF) alongside General Eisenhower, the Superior Commander of the French forces in Great Britain and Commander of the French Forces of the interior (Forces françaises de l'intérieur or FFI).

He was responsible in particular for persuading the Allies to parachute in weapons to the FFI in preparation for the Normandy landings, thus contributing to the coordination of the regular troops and the guerrilla action of the Résistance. Appointed General of the army corps on the 28th June 1944, he became the first military Governor of Paris in liberated France on the 25th August.

Commanding the French Forces in Germany (July 1945 to August 1949), he received his army general's stars on the 20th May 1946 and was then promoted to the dignity of Grand-Croix de la Légion d'Honneur. Inspector of the land, sea and air forces of North Africa and Vice President of the Upper War Council, he was elected to the Academy of Moral and Political Sciences and a member of the European consultative assembly in 1951. Keen to participate in republican activities, Pierre Koenig was elected MP for the Bas-Rhin region in 1951 (he would be re-elected in 1956), and accepted the presidency of the National Defence Committee of the National Assembly (August 1951 to June 1954). He then joined Mendès-France's government, for whom he took the portfolio of the Department of Defence from June to August 1954, a position he would occupy again in Edgar Faure's cabinet (February - October 1955). He left political life in 1958.

Pierre Koenig died on the 2nd September 1970 at the American Hospital in Neuilly-sur-Seine. He was buried in the Montmartre cemetery in Paris following a state funeral at the Eglise Saint-Louis des Invalides. An exceptional man and member of the council of the Order of the Liberation, Pierre Koenig was posthumously promoted by decree to the dignity of Marshall of France on the 6th June 1984.