Republican guard’s drum fanfare. ©J. Robert
Since the inception of the armed forces, music has been used as a living expression of the human needs of the men, whether in active service or at leisure. A reflection of the military's relations with the nation, military musical art with its songs and orchestras remains one of the testaments to military culture and heritage.
This article explains its role and its purpose. 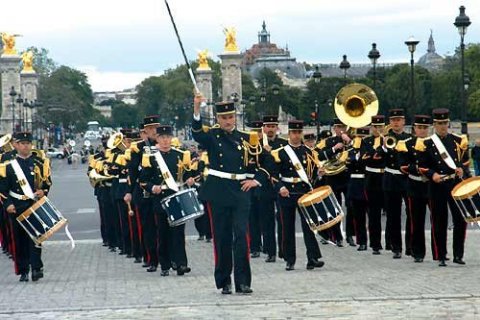 In 1848, Georges Kastner, the author of a general guide to military music for French armies, wrote: ”Music is the oldest and the most universal of all the arts.” It is true that music occupies a special place in the history of peoples. With the ability to arouse the most pleasurable emotions, music also has the power to produce the purest, most enduring, most noble and even the most sublime affections in a person. n the army, this artform also has the task of inciting courage in the soldiers and inspiring enthusiasm by replacing the fear of death with a sense of elation and bravery. Yet music is not simply a tool for arousing ardour in soldier and leading them to victory. In manœuvres and exercises and at the barracks, music is used to set the pace, determine movements and actions, transmit orders and bring harmony to everyday life. In marching, it supports the soldiers, soothes them during their labours and provides comfort when they are weary. Far from the battlefield or the barracks, music was and remains a link between the civilian and military communities, a window on the armed forces and, of course, a source of entertainment.
In any time and any region, music has been present in armies, expressed by calls, monotonous chants and discordant instruments in certain nations, while in others, music becoming more well-ordered, it was harmonious, pleasing to the ear or sometimes solemn with the appropriate rhythms. In the military world, in Ancient times and the early Christian era, music was used only during combat or as method of passing on information. Instruments then essentially belonged to one of three families: flutes, which included panpipes; lyres or sitars, chelys and phorminx; and trumpets, imperfect instruments that were difficult to play. Instruments that were used to set the rhythm or make a noise were also played alongside these groups of instruments.
Over time, in the Kingdom of France during the Middle Ages and above all during the Renaissance, the trumpet became the preferred military instrument for all infantry troops while the timpani remained the privilege of the cavalry. The kingdom's ships carried musicians with them, such was the prestige they bestowed on the commander. Drums, trumpets and then fifes were the instruments par excellence played on board the royal vessels. It was to Philidor the Elder, the court musician, to whom we owe our thanks for making the effort to archive drum marches and rhythms, airs played by fifes and oboes, trumpet calls and marches for trumpets and timpani, the calls and fanfares of trumpets and more.
This was also the time at which the tradition of writing airs adapted to the circumstances and important events in military life was introduced. During this time, some well-known marches were composed, such as the La marche de Turenne, Auprès de
ma blonde, and Malbrough s'en va t-en guerre. Over the centuries, document after document followed intended to formally set down the number of musicians, their uniforms and equipment and the instrumental requirements of the musical training taken by men in the armies. The military orchestra was then formed and slowly separated itself from the signalling instruments used.
The navy, in an effort to keep sailors entertained and safeguard its prestige, introduced more ornamental instruments such as clarinets, bassoons, oboes and horns and also employed regional musicians such as bagpipes players on armed ships in Brittany or flute and tambourine players on armed ships sailing around the coasts of Provence. The tradition of hiring local musicians is still alive and well today with the use of bagads (Breton bands) and tambourinaires (tambourine players in Provence).
Military musical airs, the instruments and their usage are constantly changing. One such change was the introduction of the military ”quick march”. The development of the pas redoublé or ”quick march” is modelled on the minuet, a social dance of French origin popular in the 17th and 18th centuries. Broadly, it is composed of two distinct pieces that follow one after the other without any interruption, the first of which is repeated in full immediately after the second, called the trio.
The repertoire of drum beats and fanfares played by the infantry and the cavalry was renewed and codified several times. David Buhl, trumpeter for the French Consular Guard, composed new fanfares in 1806, which he revised in 1825; part of his work is still performed today. Instruments identified as ”natural” - timpani, trumpets, fifes - were associated with military orchestral instruments providing harmony and progressively the current structure of military music fell into place.
From 1822, the regiments were equipped with a new instrument designed to transmit signals: the bugle, which replaced the cornet and the fife; in 1831, the bugle became predominant. A circular sent in 1827 authorised the creation of two bands for the navy, one in Brest and the other in Toulon. The great military musical parades, already honoured in the early 19th century, were once more the order of the day following the July Revolution of 1830. From the professional army to the conscription army

In 1840, a group of musicians was made available to a talented composer to create a new colossal work intended to commemorate the 10th anniversary of the Revolution of 1830. This genius composer, Hector Berlioz, wrote his Grand Funeral and Triumphal Symphony for this purpose. It was performed by several military bands and symphonic orchestras, choirs and a hundred timpani.
The law of 27 July 1872 created a storm by changing the army from a professional one to a conscription army and made military service compulsory. Music and fanfares were recreated. To the population who focused their attention to the ”blue line of the Vosges mountains”, the musicians in uniform played Vous n'aurez pas l'Alsace et la Lorraine, Paris Strasbourg, La marche lorraine, Sambre et Meuse, and other tunes.
The call-up, declared on 1 August 1914, included musicians, drummers and bugle players from the reserve and national forces. The directives stipulated, on the one hand, that musicians would have a twofold mission of raising troop morale and assisting the health department as stretcher-bearers, first-aid workers and ambulance drivers, and on the other hand, that drummers and bugle players would be tasked with transmitting orders. After the Armistice, music bands attracted the audience numbers seen back in 1872. Parades, patriotic ceremonies, concerts, torchlit parades and military musical parades, performing in France and overseas, paid tribute to the faith and confidence bestowed on military bands in the 20th century.

Numerous changes were made to the armies during the course of the interwar period. Tank regiments were formed for the first time and a fanfare granted to them. The ”transmission regiments” were granted a band and the fanfares for engineers and the artillery units were withdrawn and then re-established.

A training school for music second-in-commands was opened in 1930 in Courbevoie; the airforce orchestra (Musique de l'Air) was founded in Paris in 1936. The number of fanfares played by the North African Zouaves and infantry, parading in their full traditional dress, increased with the nouba, the regimental band, and a mascot was dedicated to them: the ram or sheep. Despite the progress of anti-militarism, pacifism and the development of recorded music and radio, military bands still hold an important place for expressing popular patriotism.

From 1946 to the 1950s, the audiences of military formations declined among the wounded population, who associated the music with harsh militarism and warmongering. The numerous changes made to the armies, after the conflicts in Indochina and Algeria, prompted their role to be reconsidered. The military units left their barracks and with their music bands and fanfares moved closer to the population through ceremonies, the presentation of the units' emblems to the new recruits, the concerts and dawn serenades that became more commonplace in the civilian environment and which continue to this day.