The protected natural site of Mont Canisy overlooks the sea from a height of 110 metres.

Located at Bénerville-sur-Mer (Calvados), the protected natural site of Mont Canisy overlooks the sea from a height of 110 metres.

For centuries, the strategic position to the south of the Seine Bay occupied by this site has led it to be used successively as a seigniorial fief which was broken up in 1793, an anti-submarine defence post in 1917-1918, a coastal battery between 1935 and 1940 and then the largest artillery base of operations for the Atlantic Wall. In recent history, it has twice been used as a coastal artillery position: between 1935 and 1940 when the French Navy installed two batteries on the site to contribute to the defence of the estuary and Le Havre port, and between 1942 and 1944 when it became an important part of the Atlantic Wall defences, designed to repel any allied landing attempt. 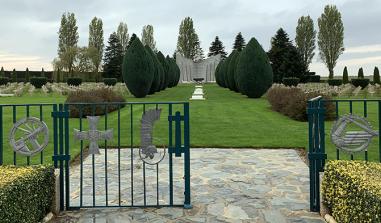