Seventy years ago, allied forces put an end to the second world war in Europe. Let's look back at a little-known historical moment, the German surrender signed at Reims on May 7, 1945. 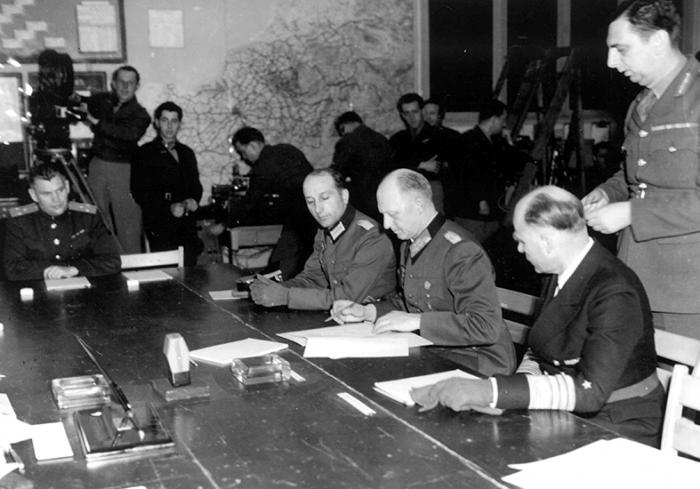 In mid-February 1945, once the Ardennes offensive had been stemmed and to better coordinate the final assault against Germany, general Eisenhower, the supreme commander of the allied expeditionary force in Europe, decided to transfer the headquarters of this force, called the Supreme Headquarters Allied Expeditionary Forces (SHAEF), from Versailles to Reims. The mission of this structure was clear and can be clearly imagined from the symbolism of its insignia: the black background of the shield represents the oppression being suffered by Europe, the sword is one of Justice and Liberty, the Rainbow shows hope and the various colours are the Allied flags.

From Reims, Eisenhower has eight armies under his command - five American, one English, one French and one Canadian - and three American air forces. SHAEF moved into the premises of the Reims modern technical college, rue Jolicoeur, vacated by the departure of the staff of the 101st Airborne division two months earlier. General Eisenhower's office was on the second floor, just above the War Room; a bedroom led off from this room so he could stay on the premises if events so required. Every morning, "Ike" held a conference with all his direct collaborators in order to take stock of the situation, events may have occurred during the night, and give orders for the coming day. In order to not attract the attention of the German intelligence services, the SHAEF installation remained very discrete: nothing outside the buildings indicated that the high command of the Allied forces were based here. Only two or three members of the military police from the 201st Military Police Company stand guard before the entrance; close to the Place de la Republique and Laon bridge, the 12.7 mm guns of the 108th Company (anti-aircraft artillery) provided protection against aircraft. Not far from there, on a small plot in the district of Neuvillette, a few light Stinson L.5 aircraft belonging to the 112th Liaison Squadron were at the disposal of staff officers.

After Hitler's suicide, on 30 April, Grand Admiral Karl Dönitz, that the Fuhrer had designated as his successor in his will, tried to take control over the destiny of the dying Reich; his goal was to achieve separate ceasefires with the Western allies in order to continue the battle against the Soviets in the East. However the situation was becoming increasingly chaotic in Germany. On 2 May, Berlin, now in ruins, fell into the hands of the Red Army. Signing partial surrenders, Dönitz tried to win time to negotiate the move of as many German units and soldiers as possible behind American lines. Thus, on 4 May, in Lüneburg, at Montgomery's control center, Admiral von Friedeburg signed the partial surrender of German forces operating in the Northwest of Germany. On 5 May, Dönitz asked him to go to Reims to Eisenhower's headquarters to negotiate a possible general surrender on just the Western front; since Eisenhower refused a separate surrender, Dönitz then sent general Alfred Jodl, Chief of staff of the German armies, to Reims with the authority to sign the capitulation. When he arrived at the Reims air base around 5 p.m., the German general was taken directly to the SHAEF. After final negotiations, the unconditional capitulation was signed by the German side in the middle of the night on 7 may, 1945, at 2.41 in the morning, thus putting an end to the second world war in Europe! The surrender was signed in the map room on the first floor of the building that had been transformed into the core of SHAEF's operations, the war room: "... the most secret of secret places in Europe" " according to American war correspondent Price Day.

It is around the huge table that the officers representing the Allies and, opposite them, the three German plenipotentiaries took place. General Walter Bedell Smith, Chief of staff of the SHAEF signed the act of surrender on behalf of the Western allies; then the Soviet general Ivan Sousloparov put his signature on behalf of the Red Army; finally, the French general François Sevez, Deputy to the Defence Chief of Staff, was invited to countersign the act as a simple witness since the event was taking place on French soil. Alfred Jodl then signed on behalf of the armed forces of the Third Reich.

Eisenhower, a rank higher that Jodl, did not attend the ceremony. However, at the end of it, he received the German delegation in his office, then the press and his staff with whom he shared champagne before giving his historic victory speech.

The cessation of fighting was set for the next day on 8 May, at 11.01 pm. Indeed, Alfred Jodl was able to obtain time from the Western allies: this gave the Germans almost two days to get as many civilians and troops as possible across to the western zone to prevent them falling into the hands of the Red Army. Stalin was not fooled. For him, it was not enough that the surrender be signed at Reims; he demanded that it be ratified at a second ceremony in Berlin, in the heart of the Third Reich, and in the Soviet occupation zone. This formality was carried out the next day, after the official end to fighting, in Marshal Joukov's headquarters. For diplomatic reasons with regard to the USSR, the Western leaders, Truman, Churchill and de Gaulle accepted this. Then other participants met in Berlin: Marshal Keitel for the German high command, Marshal Joukov for the Red Army supreme command, Marshal Tedder on behalf of the command of the allied expeditionary force and General de Lattre de Tassigny , Commander in chief of the French first army, and General Spaatz, Commander of the United States strategic air forces, as witnesses. The capitulation document came into force on 8 May 1945, at 11:01 p.m. local time, i.e. 9 May in Moscow, the date the Soviet Union chose to celebrate the victory.

With Germany defeated, hostilities ceased in Europe. However, the war was not over: Japan continued to fight in the Pacific. Almost four more months would be needed for the Empire of the Rising Sun to surrender in turn, on 2 September, 1945 finally ending World War II.