Remembering the dead of the Great War: an endless procession of widows and orphans passes before the cenotaph, 17 July 1919. © Excelsior-L’Équipe/Roger-Viollet

As soon as the First World War was over, war memorials sprang up across the communes of France, and became a focal point for individual and family remembrance of the war. A century on, these “remembrance sites” are still a mainstay of commemorations and bear witness to the common lineage of the different generations of service personnel.

Who has never paused before a war memorial to contemplate its sculptures or reflect on the long list – too long – of names engraved in the stone? Central elements of communal landscapes, these “stone sentinels” (Hervé Moisan) are a testament to the horrors of war, and remain a major focus of commemorations that remember the wars and the war dead. The location of war memorials in communes (before the town hall, in the church square, in the middle of the main square or cemetery, for instance) is indicative of the importance attached to commemorations and their symbolism. “The ultimate remembrance sites” (Antoine Prost), war memorials also represent the duty to remember. Found everywhere, they are all different. Collective unanimity, remembrance multiplicity? Behind these memorials to “those who died for France”, each community unites around the moment and reflects on its own reading of the event.

Cockerels, winged victories, soldiers leaving for the front or posing proudly: war memorials above all symbolise war, its horrors and its victory. Some municipalities even opted for pacifist monuments that denounce the bloodletting. Despite remaining associated with the First World War because of their history, war memorials have become places of remembrance of the human sacrifice made to defend the French Republic and its values.

From the outset of the conflict, there was a desire to engrave in stone the names of those who lost their lives in the fighting. Very often, the initiative, before being taken on by the commune, was down to the local parish, and was funded by donations. That was how the war memorial in Saint-Nazaire Cathedral, Béziers, came into being, in November 1915. After the war, this desire to honour the dead led to memorials being erected in the heart of communes or neighbourhoods. Their purpose was not only to honour the nation’s collective debt, but also to respond to the need of a community in mourning not to forget. The 1920s thus saw the construction of large numbers of war memorials (Annette Becker), many of which adopted the symbolism of death and mourning: the Grim Reaper, the recumbent figure, the soldier succumbing to his wounds, or weeping parents, especially the mother, likened to the Republic. At Hamel, the memorial is none other than a Pietà, very close to that of Michelangelo.

At commemorative ceremonies, the Sonnerie aux Morts or Last Post are sounded to honour the sacrifice. The roll call of the dead recalls the sacrifice made by each commune and each family, a sacrifice also remembered in the official speeches. The presence of children and veterans highlights the need not to forget: not to forget one’s comrades-in-arms, and to pass on their memory to future generations. It is also an intergenerational bond between those who witnessed the horrors of war – even if today’s veterans are no longer those of the Great War – and those who have the future before them. In this sense, war memorials and the ceremonies held before them are a means of passing on memory. Saint-Pandelon war memorial, Landes. Built in 1923, in the church square, it is topped with a stone cockerel, with a statue of Victory.

Feeling closer to the dead: from cenotaph to tomb

More than just remembering those who have lost their lives, war memorials also perform the function of cenotaphs, and sometimes even tombs. Contemplation, prayers, the laying of flowers and wreaths are private acts. For grieving families unable to recover their loved one’s remains, the distant or non-existent grave was materialised through the war memorial, which took the place of the family tomb. Thus, remembrance ceremonies could also be a time of mourning.

Some communes decided to go a step further in their tributes, by making the memorial a communal tomb. The perpetual resting place granted by the State did not apply to the dead whose bodies were returned to their families. In 1921, some municipal authorities decided to grant a perpetual resting place to them too, and created military plots in their cemeteries. Some communes then chose to combine war memorial and perpetual resting place, so that the individual and the collective were as one. In such cases, remembrance ceremonies could also be a time of contemplation and prayers. But these times of mourning disappeared with the mourners, leaving only official ceremonies. The actual bodies could in some cases be forgotten with time, so that the memory of the memorial as a tomb was lost, turning it into a mere cenotaph or work of architecture. This was what happened in Portiragnes.

On 21 June 1921, the local council of this little village in Hérault decided not only to grant a perpetual concession of 8.10 m² “to the families who paid a ‘supreme tribute’ under Article 106 of the Law of 31 July 1920”, but also to erect a war memorial over that grave.  In fact, the war memorial, located in the cemetery’s central avenue, also became the shared tomb of the eight fallen sons of the village whose bodies were returned, free of charge, by France. Plaques bearing the full names of the 35 young men who died for France were installed on its four sides, without clearly distinguishing them from those laid to rest beneath. During the course of the 20th century, the memory of the shared grave was lost, so that the site became associated with the war memorial alone. With it, the memory of the returned bodies was also lost. During the First World War centenary celebrations, the search for those bodies (which were nowhere to be found in the cemetery) led us to the war memorial. The local council’s decision of June 1921 confirmed them to be there. Since then, the municipality has chosen to give a special slant to its Remembrance Day commemorations. As well as the habitual wreaths, eight chrysanthemums, symbolising the eight returned bodies, are laid at the foot of the war memorial. 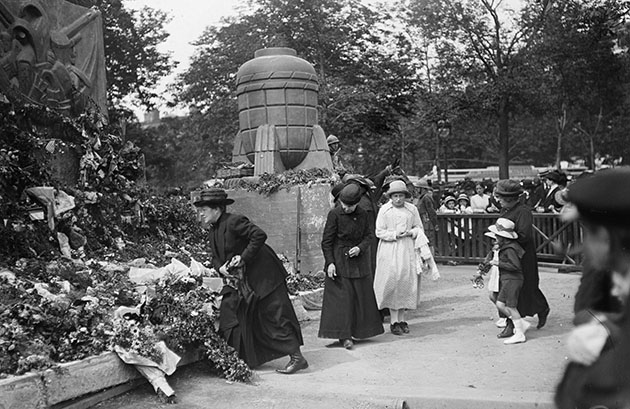 Remembering the dead of the Great War:  an endless procession of widows and orphans passes before the cenotaph, 17 July 1919.

Besides the Great War, war memorials today remember all contemporary conflicts. When they were built, war memorials symbolised the “war to end all wars” and embodied mass mourning. The official speeches given at the Armistice Day ceremonies reaffirmed this regularly, as did the presence of the mourners, dressed in black. Then, as the decades went by, the Great War became the First World War and the families mourning the deaths of their loved ones themselves died. To the long rolls of those killed in the 14-18 war were added those who died in 39-45, then those of the wars of Indochina and Algeria, and, more recently, those killed on overseas operations. War memorials have thus become the chief site for commemoration of contemporary conflicts that have seen French involvement. Today, 11 national ceremonies, organised in the departments by prefectures, sub-prefectures and municipalities, with the participation of the National Office for Veterans and Victims of War, “celebrate the memory of the heroic exploits of the great men, the combatants and the sacrifice of civilian and military victims in the wars”.

To honour the memory of those who gave their lives to defend the values of the Republic, pay tribute to all victims of war and pass on the memory of conflicts to the younger generation: these are the goals of commemoration and war memorials, as both sites of remembrance and the duty to remember.

In 2016, Cyril Pefaure, the then young chairman of the Federal Union of Veterans and War Victims – Centre Tarn, had the idea of digitising the war memorial in his village of Lombers. Observing young people’s behaviour around war memorials, Cyril decided to launch a youth working party to create a website using information collected by young people on the fallen servicemen of the Lombers memorial. “The children would often come and sit on the steps of the war memorial to use their phones. That is what gave me the idea of getting them interested in the monument through what they did most often. And it worked,” he explains. So he launched a mobile app (hexalinks.fr) that enabled users to access all the information relating to the site, as well as to geolocate the memorial, make a call or view the photo galleries and other content (videos, documents, etc.). Example of use of the Lombers war memorial app (Tarn)

The results of the initiative were unveiled at an evening ceremony on 11 November 2018, the day of the centenary of the end of the First World War, with many teenagers and their families in attendance.

Today, Cyril has set up a programme with the defence education class at the local secondary school, that will ultimately compile the memory of all 16 war memorials in the Centre Tarn community of communes, i.e. 750 biographies, 16 memorial histories, and much more.

The “Lieux de Mémoire” programme, as it is called, can be adapted for use by both secondary schools and work parties run by local councils for young people in the school holidays. Besides the information research, the programme also includes the renovation and upkeep of the memorial, visits to remembrance museums and departmental archives, talks given by veterans about their experiences, etc. This multidisciplinary programme, whose main purpose is the duty of remembrance and citizenship education, is a fun way to raise the awareness of 12 to 18-year-olds about local heritage and history, their history. In 2019, it won first prize in the national “Civicism and community commitment” awards of the Federal Union of Veterans and War Victims.