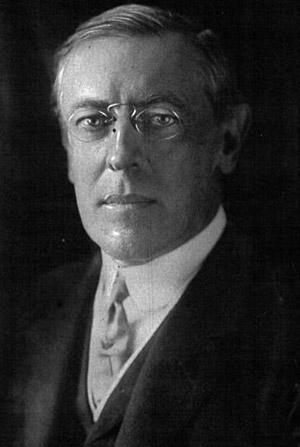 Woodrow Wilson was the twenty eighth president of the United States. He committed his country to the First World War in April 1917, following three years of neutrality and at the end of the war strove for the reconciliation of the European countries, which earned him the Nobel Peace Prize in 1919. Woodrow Wilson was the son of a Presbyterian pastor who raised him with strictness and commitment to his values. Following studies in law at Princeton University, he became a lawyer (Atlanta 1882-1883) and professor of political sciences at various institutions (1890-1910). Elected Democrat Governor of the State of New Jersey in 1910, he was chosen by the Democratic party as its candidate for the presidential elections of the 5th November 1912, which he won thanks to the rift between his republican opponents, Theodore Roosevelt and William Taft. Wilson was in favour of strong executive power and set in place an ambitious democratic and economic programme. He reduced customs rights, reformed the banking system by creating a federal reserve facilitating credit and strengthened the antitrust law authorising strike and boycotting action by workers. On a political level, he had a law voted in banning child labour, introduced the woman's right to vote, established income tax and a pension system for federal employees and reduced the working day to 8 hours.

In overseas politics, Wilson was not in favour of interventionism but nevertheless expanded active diplomacy and strengthened American dominance on the continent by trying to impose American style democracy there. But he did not want the United States to become involved in European conflicts, as per the Monroe doctrine, which prevented the United States from intervening in Europe and meddling in international problems. On the 4th August 1914, he declared American neutrality in the conflict by stating "this war is not ours". He would, however, be re-elected for a second term in November 1916, most notably because "He kept us out of the war", indicating nevertheless in his inauguration speech that this position would probably be very difficult to maintain. So, falling victim to the all-out submarine warfare waged once again by the Germans - it had been suspended following the death of a hundred American citizens in the torpedoing of the liner Lusitania, on the 7th May 1915 - and outraged by German manoeuvres to coax Mexico into war against the United States - a telegram from Zimmermann, the German Secretary of State for Foreign Affairs - President Wilson asked Congress for permission to enter into the war against Germany, a request that was approved on the 6th April 1917. A month later on the 18th May, he reintroduced compulsory military service which had been abolished at the end of the American Civil War (1865).
Wilson coordinated the war effort and provided the Allies with equipment and military and moral support (In October 1918, around two million American soldiers under the command of General Pershing landed to fight in France). He also sought to take political control of the coalition and defined the Allies' war aims. On the 8th January 1918, in a speech to Congress, he set out a fourteen point defining the peace objectives. These Fourteen Points advocated the end of colonialism, the abandonment of economic barriers between nations, the guarantee of freedom of the seas, nations' rights to self-determination and the creation of a League of Nations with a view to providing "mutual guaranties of political independence and territorial integrity for both large and small nations". Some of the points in his programme would serve as the basis for the Treaty of Versailles in 1919.
On returning to the United States, Wilson himself presented the Treaty of Versailles for ratification by Congress, but he ran up against a powerful isolationist tide that refused to sign a treaty obliging them to intervene in a new conflict. Congress twice rejected the Treaty of Versailles, in November 1919 and in March 1920, and declared itself against joining the LON. Repudiated by Congress and the majority of the American people, Wilson thus witnessed the ultimate irony of seeing his own country refuse to join the League of Nations, whilst his efforts at reconciling the countries of Europe nevertheless earned him the Nobel peace Prize in 1919 (received in 1920). Physically exhausted by the effort he had put into establishing peace, he suffered a stroke which left him practically paralysed. He would remain shut away in the White House until 1921, after the crushing victory of the conservative republican candidate, Warren Harding. He then retired to his home in Washington where he died on the 3rd February 1924. He is buried in Washington cathedral.