Since the creation of the naval shipyard at Rochefort, the pointe Sainte-Catherine, opposite Fort Boyard on the southern part of the island, has been the home of the first fortifications on the Ile d'Aix. Drawing its inspiration from plans devised by Vauban, construction of the Fort de la Sommité began in 1699 and was completed in 1703. Accessed via a drawbridge and surrounded by moats, the fort is then flanked by five bastions, of which traces remain visible today at low spring tides. In September 1757, during the Seven Year War, the English fleet commanded by Admiral Hawke arrived in the harbour of the Ile d'Aix and completely destroyed this first fort. In 1779, Montalembert, along with his deputy Choderlos de Laclos, undertook the construction on the same site of a wooden fort, which proved temporary as it was destroyed in 1783 without ever seeing any action.

The Fort de la Rade owes its current appearance and name to work carried out in Napoleonic times. Equipped with an impressive central building designed to accommodate its artillery pieces, the fort has long ramparts that allow a full tour of the fort whilst providing an unobstructed view over the islands of Madame, Oléron and Ré, the two lighthouses on the Ile d'Aix and the famous Fort Boyard. Various refurbishment work was carried out during the second half of the 19th century, including the concrete shelters dating from 1890.
Since 1986 tourist facilities have been set up in the Fort de la Rade, which is open all year round and free to visit.
Le fort de la Rade Mairie de l'île d'Aix Rue Gourgaud 17123 Ile d'Aix Tel. + 33 (0)5 46 84 66 09 Fax + 33 (0)5 46 84 65 79 E-mail:mairie@iledaix.fr 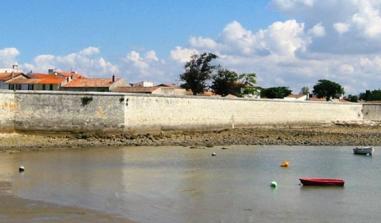 The fortifications of île d'Aix
Charente-Maritime