Franco-American ceremony in liberated Colmar, February 1945.
Generals de Lattre de Tassigny, commander of the French 1st Army, and Devers, commander of the US Sixth Army Group (which included the US Seventh Army and the French 1st Army), following a review and decoration ceremony attended by the people of Colmar, which had just been liberated by the Allies. 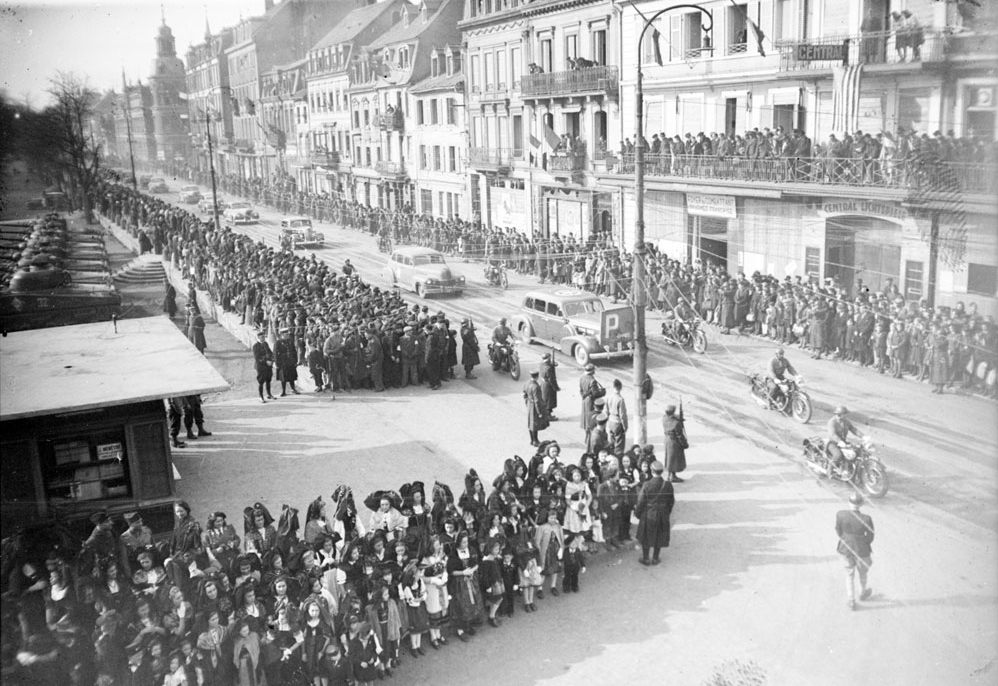 The liberation of Colmar was the final stage of the Alsace Campaign, launched by the French 1st Army in November 1944. Victory therefore appeared to be within reach. But logistical problems, coupled with a stiffening of German resistance, forced the Allies to halt their advance.

The offensive was resumed in November. The Allied armies hoped to enter Germany as quickly as possible. They now formed the Sixth Army Group, in the command of General Devers, comprised of the US Seventh Army, the French 2nd Armoured Division (2nd DB) and the French 1st Army.
The Americans and the 2nd DB liberated Strasbourg on 25 November. The 1st Army reached the Rhine on 18 November, then liberated Mulhouse on the 20th.

The liberation of Colmar, situated at the centre of the pocket formed by the area still occupied by the Germans, therefore seemed close at hand. Yet it would take another two and a half months of exceptionally bitter fighting for the 1st Army to overcome the German resistance.

The unexpected duration of the operations had partly to do with the fact that Alsace remained a secondary sector for the Americans, despite the importance to the French of liberating Alsace and Colmar. Alsace was also of key importance to the Germans, who regarded it as an integral part of the territory of the Reich.  It was therefore out of the question to allow the French to recapture it. In addition was the threat posed by a potential Allied presence in Alsace to the Rhineland, the vital artery of the German war economy.

Despite the reinforcements received by the Germans, the resources they had at their disposal were significantly inferior to those of the French; they did, however, have the terrain on their side.
The Vosges were a barely penetrable massif, especially in winter, while the plain of Alsace appeared to offer better opportunities for attacking the German force. But it was ultimately an area ill-suited to manoeuvres, having many rivers and canals running through it, and being scattered with built-up areas and forests.

The first attempt to reduce the Colmar Pocket: 5 to 24 December 1944

The offensive got under way on 5 December but, because of German resistance, the 1st Army had to content itself with advancing along the edges of the pocket and liberating Thann to the south (10 December) and Sélestat to the north. Himmler was in command of the German forces in Alsace and the Rhineland. On 12 December, General de Lattre was forced to fall back on a more modest plan, consisting of launching attacks on Colmar and Cernay from the ridges of the Vosges, then, if successful, advancing as far as the River Ill, before pushing on to the Rhine.

However, a lack of ammunition coupled with German resistance prevented them from achieving these objectives. The advance halted on 18 December, five miles from Colmar, with considerable losses being recorded. These results irritated General Devers, who pressured de Lattre to finish things off. He took away the 2nd DB, which had been assigned to de Lattre, and incorporated it back into the US Seventh Army. Against German resistance whose intensity appeared to have increased tenfold following the initial successes in the Ardennes, where they went on the offensive on 16 December, General de Lattre was forced to halt his offensive on 24 December.

On 1 January, the new offensive launched by the Germans between Bitche and Sarreguemines led Eisenhower to consider withdrawing to the Vosges ridges, as the whole of liberated Alsatian soil risked being lost. General de Gaulle’s intervention made the Americans abandon this idea. However, it was not until mid-January, as a result of the Soviet offensive, that the German pressure slackened and General de Lattre could once again consider resuming operations in the Colmar sector.

The second phase of the Battle of the Colmar Pocket: 20 January to 9 February 1945

General de Lattre relaunched the offensive after assembling the resources to give him a markedly superior fighting force.  The eight divisions of the 1st Army (which had been rejoined by the 2nd DB) were reinforced by a large number of FFI units, so that he now had 350 000 men against the 100 000 Germans of the 19th Army.

General de Lattre’s plan consisted once again of taking the German defences in a pincer movement, pushing up the Ill valley in the south and coming down from the hills to the north of Colmar. The offensive got under way on 20 January in extreme weather conditions. Snow reduced visibility and left the infantry without tank support. The temperature soon dropped to -20°C, making tanks and artillery unusable, and preventing ammunition and supplies from getting through.

To the north, the 2nd Army Corps, which had been reinforced by two American divisions, succeeded in establishing a bridgehead on the Ill on the 22nd, but in this area crossed by waterways and dotted with mines, progress for the Combat Commands of the 2nd and 5th DB was extremely difficult. The Colmar canal was not reached until 28 January. In view of the difficulties they faced, de Lattre asked General Devers for reinforcements and, on 25 January, he was assigned the US 21st Army Corps. It was the first time that an American unit of this level was placed under the orders of the French 1st Army’s commander.

This show of trust from the Americans contributed to raising the morale of the troops and enabled the action against the north of the pocket to be resumed. To the south, the 1st Army was unable to break through the defences of the Cernay sector, forcing it to shift its focus to Ensisheim. Making no headway with his encircling manoeuvre, de Lattre decided to give priority to the liberation of Colmar.

Conducted with care so as to limit the destruction caused, the fighting culminated in the liberation of the city. The French tanks of General Schlesser were the first to enter the city, where the enemy put up stiff resistance. Colmar’s astonished inhabitants forgot the fighting and came out of their homes to give a jubilant welcome to the liberators. On 3 February, the shock battalions and paratroopers of the 1st Chasseurs Parachute Regiment secured the city. On General de Lattre’s orders, the 152nd Infantry Regiment returned to Colmar, its garrison town between 1919 and 1939. On 8 February, the liberators made their formal entrance into the city, with a big military parade on Place Rapp.

The fighting for the Colmar Pocket and the city had been extremely bitter. It had cost the 1st Army 4 800 lives and 18 000 wounded, disappeared or captured. Despite the difficulties encountered, the campaign enabled the French to hold their own with their Allies, by themselves liberating the last important bit of French soil that was still occupied by the Germans.

By February 1945, the only parts of France still held by the enemy were the Atlantic and North Sea pockets and a small area of the Alps. By attaching a number of US divisions and an army corps to the French 1st Army, the Allies signalled their recognition of the French army’s revival.