Corps 1
After uniting the five beaches and forming a solid beachhead stretching some 50 miles along the coast of the English Channel, the Allies' next step was to put their plan into action. While the British forces mounted pressure towards Caen and attracted the armoured German divisions around the capital of Lower Normandy, the Americans dashed from Utah Beach to Barneville in order to cut off the Contentin Peninsula. Following the capture of the large continental port of Cherbourg (in late June), they attempted to penetrate the German defence lines in the south while, at the other end of the front, the British forces attempted to liberate Caen.
The second half of July brought with it good news in three areas: the liberation of Caen, the capture of Saint-Lô and the first penetration of enemy lines towards Granville-Avranches. After attempting in vain to isolate a part of Patton's army (counter-attack near Mortain), the Germans, whose resistance was weakened, attempted to retreat towards the Seine.
Corps 2

Then, in a massive pincer-like manoeuvre, the British, Canadian and Polish troops in the north and the Americans and the French under Leclerc, coming from Alençon in the south, captured a section of two German armies in the area of Falaise-Chambois (the ”Corridor of Death” in Montormel). The Battle of Normandy ended on 21 August 1944, in Tournai-sur-Dives. The Allies had won their first victory on the continent. Three days later, they crossed the Seine and entered Paris. 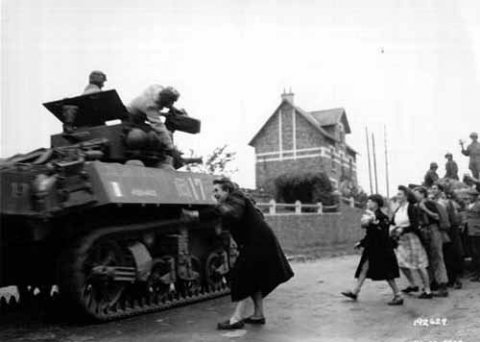 In Falaise, the Allies recorded a loss of 209,672 men, two-thirds British and Canadian. Main lines of advancement of the Allies between June and September 1944.

This title was conferred to the victorious route taken from Saint-Lô (Normandy) to Bastogne (Belgium) by General Patton's 3rd United States Army whose XX Army Corps (under General Wolker) swept through Avranches in late July and reached Moselle in early September. And with Leclerc's 2nd armoured division that landed with them on Utah Beach and the 60,000 French Forces of the Interior (FFI) that fought alongside them, the 325,000 men in Patton's army formed a magnificent fraternity of arms.
External websites: Normandie Mémoire
Website of Normandy's regional tourist committee
Site Normandie44
Source: MINDEF/SGA/DMPA