Parish church of Metzeral-Sondernach, place of pilgrimage and a Memorial dedicated to fallen soldiers of World War One.

Emm Church is the Parish church of Metzeral-Sondernach, an ancient place of pilgrimage dedicated to the Virgin and a Memorial dedicated to soldiers of World War One (Haut-Rhin) who fell in the Vosges, notably at the Battle of Metzeral in June 1915.

The current Emm church and memorial is built on the site of a 15th-century chapel, which was destroyed during the Battle of Metzeral. It was built by Abbot Martin BÉHÉ(1887-1963).

From 1922 to 1923, a committee dedicated to the "Memory of Alsace" was formed, under the patronage of Mgr RUCH, Bishop of Strasbourg and General de POUYDRAGUIN, former major of the 47th division and former military governor of Strasbourg, members of which came from all over France. Charity sales were organised in France's large cities (Paris, Lyon and Bordeaux) and abroad (notably in Switzerland).

The building was consecrated on 4 October 1931 and the bells were consecrated on 3 July 1932. Both ceremonies took place in the presence of Mgr RUCH, General de POUYDRAGUIN, Madame la Général SERRET and many other well-known people.

The main material is pink sandstone from the Vosges, from Rauscher d'Adamswiller quarries; this is the same material used for Strasbourg cathedral. A dedication in capital letters stands out on the harmonious façade: "A nos vaillants soldats, l'Alsace reconnaissante" (To our brave soldiers, to whom Alsace is grateful).
The bell tower is inspired by the tower on the old chapel of Fourvière, in memory of a charity sale in 1926 and has four listed bells. Along the nave, in the arcades which are 1.80 m high, there are plaques in yellow marble from Sienna on which the names of soldiers who fell in the Vosges are engraved. One window in particular recalls the sanctuary's vocation: above the side chapel, the stained-glass window known as the "Souvenir" window shows a soldier dying in the arms of a chaplain, to whom an angel brings the crown of the chosen.
A memorial mass is celebrated on the Sunday before 11 November with the participation of war veterans and their standard-bearer. 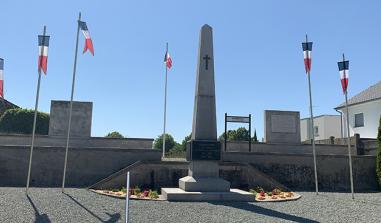 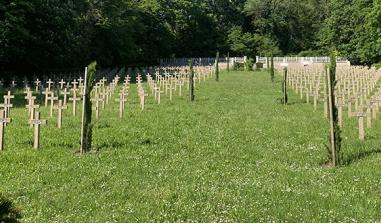