Relations between France and the region known as Indochina began in the 17th century, when Jesuit missionaries arrived in the Far East and attracted an important following when the Jesuits, led by Pigeau de Béhaine, lent support to Emperor Annam Gia Long's attempts at unification. The Emperor, helped by French military advisors, was the first to unify Vietnam, in the late 17th century, where his dynasty ruled until 1955.

The rise of imperialism in the 18th century onwards prompted European powers to conquer, directly or indirectly, parts of Africa, Asia and Oceania. France, on the grounds that it wanted to protect the missionaries and persecuted Catholic population, ventured into Indochina and China between 1858 (on the initiative of Napoleon III) and 1883. 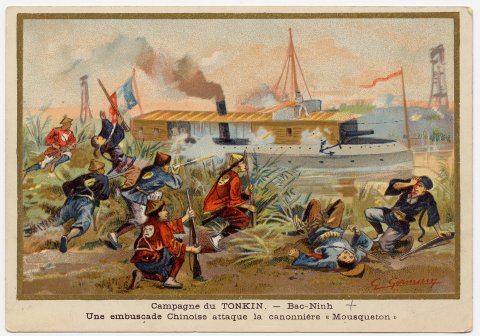 Annam and Tonkin were occupied following harsh campaigns, while Cochinchine was made a French colony between 1863 and 1867.

The French became familiar with exotic places such as the Mekong Delta and Lang Son that led to the fall of Jules Ferry's ministry in 1885, the year when China finally recognised France's presence in Indochina. 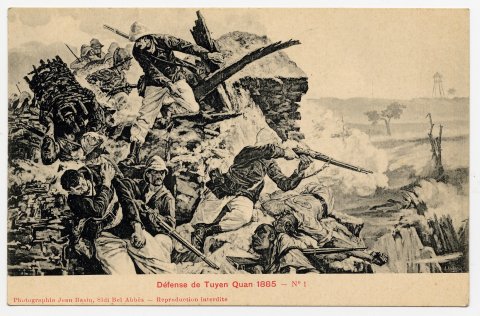 The conquest was a difficult process and was subsequently followed by regular uprisings, which were violently quashed. 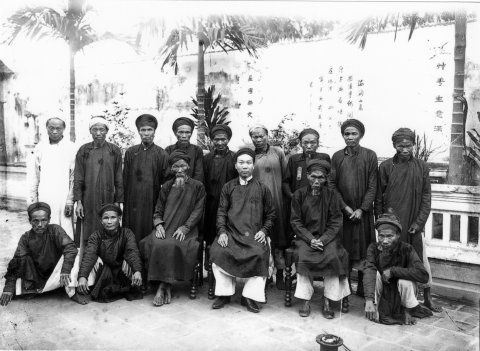 France relied on the support of the local elite. Mandarins and academics were attached to their traditional culture, but some had acquired a French culture in which the notions behind the French Revolution, i.e. liberty, equality and national independence, came to justify the national aspirations of the peoples of Indochina, especially in Annam, Tonkin and Cochinchine, two protectorates and a French colony that make up Vietnam today. 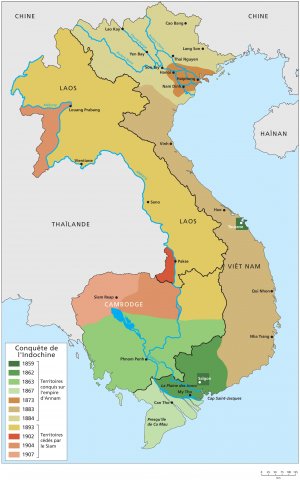 Map of the conquests of Indochina. Source: MINDEF/SGA/DMPA

The participation of Indochinese infantry and workers in the First World War accelerated a process that had never really stopped. France was forced to react extremely violently on many occasions. Several Annam sovereigns were deposed and, in 1930, a serious insurrection led by Annamite infantrymen in Yen Bay was violently suppressed. 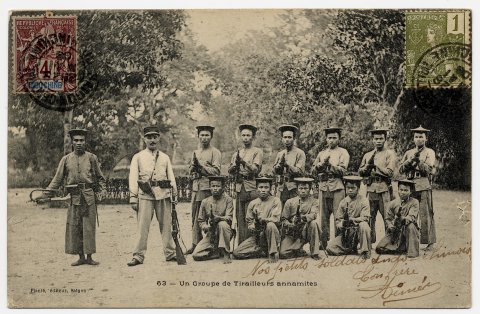 France's defeat in 1940 had immediate repercussions on its Indochinese assets. Japan, bogged down by the war in China, made a show of force in the Lang Son region and demanded military bases from the Vichy government. In 1941, the whole of Indochina was occupied by the Japanese army, after the French were obliged to rectify borders in Thailand's favour, despite France's victory in Koh Chang. The Indochina French army, though maintained was smaller and France's prestige suffered a blow from which it would never recover. While Admiral Decoux governed Indochina by following through the orders of the Vichy government, a minority of French military and civilians started to organise a resistance movement, mainly forming groups in hard to reach regions. The Indochinese population were divided, especially in Vietnam. While certain nationalists looked to Japan, others, first and foremost the Communists, attempted to mount a national resistance movement with support from the Allies. In 1941, Ho Chi Minh established the nationalist league, named the Viet Minh, which was rooted in the Communist Party. 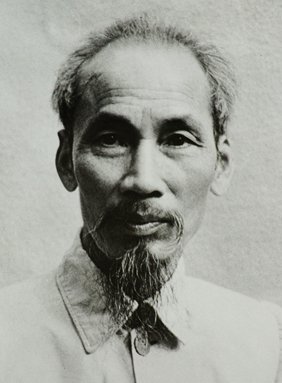 Japan, still under the strain of war in China, attacked the United States and their British and Dutch allies in December 1941. To avoid an Allied offensive in French Indochina, Japanese troops attacked French military and civilians on 9 March 1945. The sudden, brutal and atrocious Japanese attack almost totally disrupted France's administrative and military framework in Indochina, despite fantastic feats of arms such as the actions of Jean d'Hers, killed in action, to whom De Gaulle awarded the Croix de la Libération posthumously. 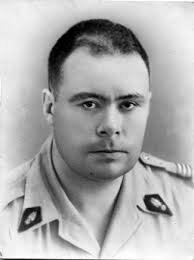 If not massacred in horrendous conditions, French civilians and military were taken prisoner and help in camps, such as the one in Hoa Bihn ran under the iron rule of the infamous Kempetai.

Japan was defeated soon after, but France was unable to reclaim its glory and power in its positions in the Far East. In September 1945, when Indochina was occupied in the south by the British and in the north by the Chinese tasked with disarming the Japanese troops, Ho Chi Minh proclaimed independence for the Republic of Vietnam. It was in this climate that the first units of the French Far East Expeditionary Corps (CEFEO), under the command of General Leclerc, landed in the region. 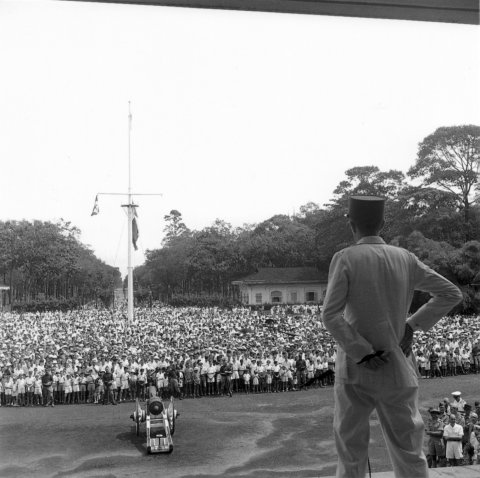 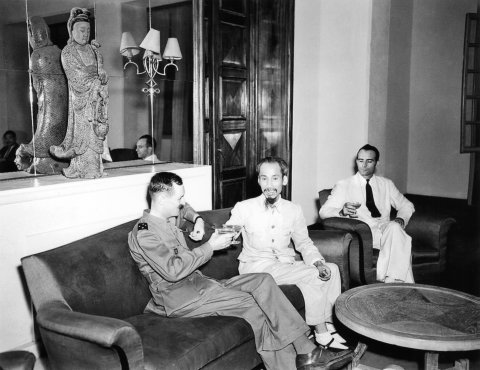 This accord, which Leclerc was very keen to maintain, was unfortunately short-lived. Hostilities resumed on 19 December 1946. French public opinion was rather indifferent and even hostile to a situation that many considered a ”dirty war”. The French troops, made up of professional soldiers, career soldiers and conscripts, supported by Indochinese auxiliary soldiers, fought fearlessly. However, while some men were capable of adapting to a new and tougher style of war, most soldiers and commanders waged a traditional battle opposite an enemy that employed all forms of guerrilla warfare to win back a population by any means possible, wear out the enemy, deplete its troops and create a climate of total and constant insecurity to break its morale before, at a later stage, engaging them in decisive operations. 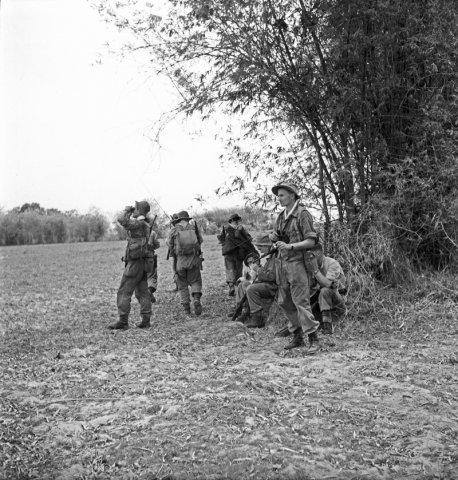 Against the Viet Minh ”bands”, sweeping of the Jonc Plain (Mekong Delta) by parachutists in the SAS Parachute Shock Demi-brigade, March 1947. Source: ECPAD

In the context of the Cold War, Indochina became a pawn in the East-West struggle. Gradually France accepted, even requested, American financial and technological aid. In return, the US demanded the French army disengage. This was an attempt at the same time to ”regain” the aspiration for independence to deprive the Viet Minh of its most powerful leverage. France was then obliged to negotiate with the former emperor of Annam, Bao Dai. The successive accords signed in 1948, 1949 and 1950 resulted in the creation of an independent state of Vietnam within the French Union. The same happened for Cambodia and Laos.

From a military perspective, the French tried to ”break” the enemy by decapitating its leaders and command. This was the primary objective of Operation Lea in 1947, which produced mitigated results despite the bravery shown and the resources deployed. In 1949, the Chinese communists under Mao Zedong fought against the Chinese nationalists. They then showed support for the Viet Minh by setting up a rear logistics base that was used to prepare a modern Viet Minh battle group.

In autumn 1950, the Battle of Route Coloniale 4 ended in catastrophe for the French army. The evacuation of Cao Bang led to the desertion of Lang Son and Lao Kai, as well as the destruction of several expeditionary corps units, including the prestigious Foreign Legion's 1st Parachute Battalion. 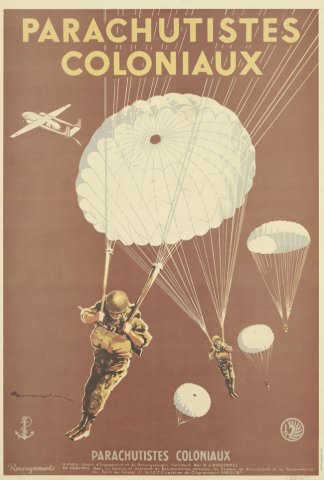 The arrival of General de Lattre de Tassigny gave the French troops a healthy shock. Under ”Roi Jean”, any plans to withdraw from or evacuate any territory in the region were completely out of the question. High commissioner and commander in chief, De Lattre de Tassigny regrouped his troops and succeeded in breaking the Viet Minh's stride by launching several very harsh offensives, such as the battles of Vinh Yen, Dong Trieu and the Day River.

At the same time, De Lattre launched a widespread propaganda campaign, both in the United States, to increase the financial participation and arms contributions of America, and in Indochina, where he sought to strengthen the expeditionary corps politically and militarily through the gradual formation of a national Vietnamese army. 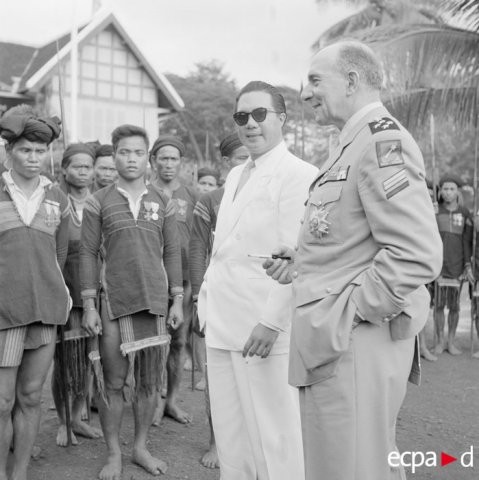 The French command did not believe the Viet Minh were in possession of modern military resources or capable of surrounding the valley. Its plan was to obliterate the enemy in this fortified camp. However, in early 1954, millions of Vietnamese labourers were busy transporting arms, supplies and heavy artillery. The fortified camp found itself surrounded. On 13 March, Giap launched the attack on Dien Bien Phu. Each outpost put up a brave fight, but the Viet Minh succeeded in taking them one by one. The battle ended on 7 May 1954. The last 11,000 to 15,000 surviving members of the expeditionary corps, all surrounded, were captured and forced to live in horrendous conditions. 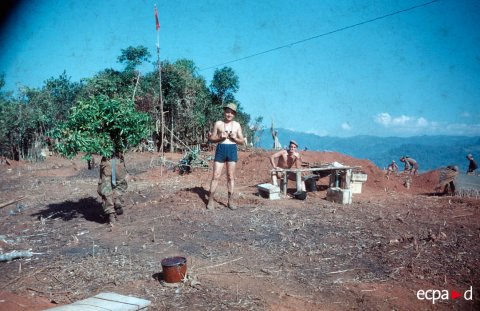 While Dien Bien Phu may not have been a critical site from a purely military perspective, the human, moral, political and psychological costs were immeasurable. The international conference held in Geneva resulted in the Geneva Agreements of 21 July 1954 and the division of Vietnam into two distinct states in 1955. On 14 September 1956, the last French soldier left Indochina.

French military losses were estimated at over 47,000 soldiers, today commemorated by the memorial in Fréjus and the monument erected at the site in Dien Bien Phu on the initiative of a former non-commissioned officer in the Legion. 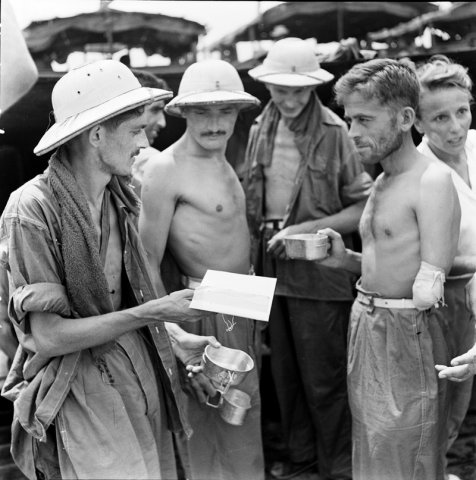 In Vietri, prisoners of war are handed over to the Red Cross, 13 July 1954. Source: ECPAD 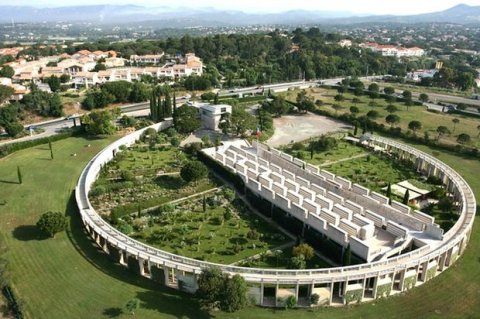 The memorial in Fréjus. Source: MINDEF/SGA/DMPA