Liberation of the camps

Sixty years after the collapse of the National Socialist dictatorship and the end of the Nazi concentration camp system, certain questions have yet to be answered despite everything we have learnt about the subject.

In the end, nobody will ever know exactly how many victims were lost during that period, nor how many prisoners were still living in the camps when they were liberated by the Allied troops.

When the survivors of the camps were liberated, the joy was mixed with an immense sadness at not having been able to save countless victims in time, all of the deportees who had died of diseases, physical exhaustion, famine and despair, or who were murdered by their executioners to the very end. To this day, the extent of this human catastrophe remains hard to calculate with precision.

22 July 1944 marked the beginning of the end of the Nazi death camps when Soviet units reached the concentration and extermination camp of Majdanek, located to the east of the city of Lublin.

In June, Heinrich Himmler had ordered the evacuation of the camps before the Allies' arrival and the transfer of the detainees to other camps. This order first concerned the camps located in the Baltic countries, as well as Majdanek, where between 200,000 and 250,000 people were murdered starting in the autumn of 1941 (1). It was the first camp to be evacuated before the arrival of its liberators; about a thousand prisoners were nonetheless abandoned there.

Before fleeing, the Germans had tried in vain to erase all traces of their crimes. The efforts undertaken by the Soviet authorities to inform public opinion around the world of the crimes they discovered fell upon deaf ears.

The progressive dissolution of the Auschwitz-Birkenau camps complex started during the summer of 1944. Until the end of that year, approximately half of the 155,000 prisoners were transferred by train, by truck or on foot to the camps located further to the west. In November 1944, the extermination factories at Auschwitz ceased their operations as ordered by Himmler (2). After the Allied landing in France, the evacuation of Natzweiler-Struthof, the only concentration camp located on French soil (in annexed Alsace), began in September 1944, as was also the case for Herzogenbusch in the Netherlands. The prisoners in this camp were transferred to Sachsenhausen and Ravensbrück, those from Natzweiler were moved to its satellite camps, to Dachau and other camps.

On 27 January 1945, Red Army units reached Auschwitz-Birkenau, located to the south of Krakow. They liberated the approximately 7,000 sick and dying prisoners who had been abandoned there. Many of them died, exhausted, a few hours or days later. In his story of the last days at Auschwitz, Italian author Primo Levi described the situation of the camp when the liberators arrived in these terms: ”We were in a world of the dead and larvae. All around us and within us, all traces of civilisation, no matter how small, had disappeared. The process of transforming humans into simple animals initiated by the triumphant Germans had been completed by the defeated Germans” (4). Some ten days earlier, on 17 January 1945, the some 60,000 detainees still able to walk were taken to the west. 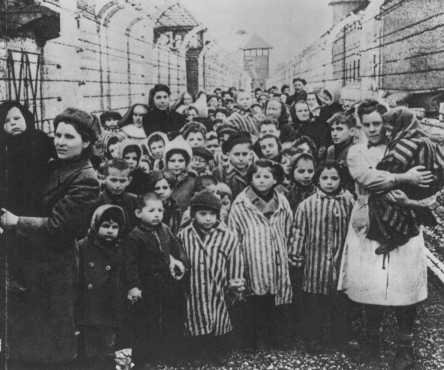 Thousands of deportees were murdered or died of exhaustion

The detainees from two other concentration camps located on Polish soil, Gross-Rosen and Stutthof, as well as their satellite camps, were also evacuated during the winter months, before the arrival of the Red Army troops. Thousands of them were murdered on the road or died of hunger, cold and exhaustion.

The arrival of mass convoys transporting sick and exhausted people in the camps located in the region called ”Old Empire” caused a dramatic deterioration of living conditions. The lack of food, sanitary facilities and medical care led to epidemics and a sharp rise in the mortality rate at all the camps. The SS leadership reacted with murderous actions to reduce the number of detainees and setting up death areas and camps for the bedridden where the prisoners were left to fend for themselves. (6)

In early April 1945, the Allies from East and West had pushed so far forward that the final collapse of National Socialist domination was imminent. For the prisoners at Buchenwald, Dora, Flossenbürg, Ravensbrück, Sachsenhausen, Bergen-Belsen, Neuengamme, Dachau and Mauthausen, as well as those at several hundred external camps, the final weeks turned into a race against death. Bergen-Belsen held a special position among the concentration camps. 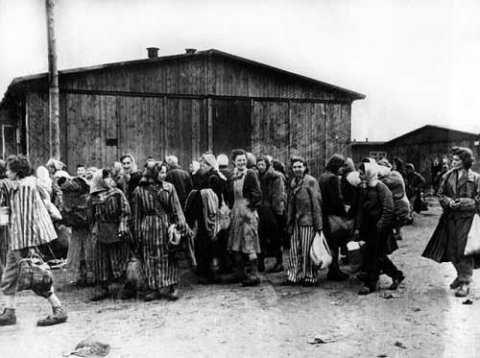 In the spring of 1943, a ”reception centre” was set up for Jewish detainees who at first had been excluded for deportation to the extermination camps. They were not subject to forced labour and their living conditions were more tolerable than at the other camps. It wasn't until the final phase, in the autumn of 1944, when convoys of detainees arrived at Bergen-Belsen from the camps that had been evacuated, that this centre quickly became a death trap. There was not enough room for to house the prisoners, insufficient sanitary facilities and care for the sick and poor nutritional conditions that got worse every day.

Between January 1945 and 15 April 1945, the day the camp was liberated by British soldiers, between 80,000 and 90,000 people were transferred to Bergen-Belsen in about a hundred convoys (7). There were tens of thousands of victims of disease, notably typhus, famine and exhaustion. When the British reached the camp on 15 April, the soldiers were overwhelmed by the nightmarish sight: perhaps 10,000 dead bodies, left unburied, were still lying there where they had died. The appearance of the living made them hard to distinguish from the dead. The British military physician H.L. Glyn-Hughes later talked about his arrival at Bergen-Belsen: ”The camp's condition was truly indescribable; no narrative and no photograph can capture the visions of horror outside the barracks, and the terrifying scenes that we found inside were even worse. Everywhere throughout the camp there were bodies piled up to different heights, some outside the barbed wire fences, others inside between the barracks. Human bodies lay around everywhere in the different sections of the camp. The drainage ditches were full of bodies, and there were countless dead inside the barracks themselves, some lying with the living on a bedstead.” (8).

Even though pictures cannot capture what these men felt, the snapshots and films made by the British military correspondents at Bergen-Belsen and by American reporters at other camps have left their indelible mark on international opinion.

Evacuation and liberation of the last camps

The evacuation and liberation of the last camps took one month in all. On 5 April 1945, the American troops were the first to reach Ohrdruf, a Buchenwald satellite camp located near Gotha, where the SS had slaughtered the detainees during the previous days.

The Buchenwald concentration camp was liberated on 11 April. Its evacuation had begun on 7 April. Of the 47,500 detainees interned in the main camp, 28,000 were evacuated by train or on foot to Flossenbürg, Dachau and Theresienstadt. During this ”evacuation”, thousands died of exhaustion or were shot by the SS guards who accompanied them. (9) When the American Army's 6th Armoured Division entered Buchenwald on 11 April, the SS had fled, leaving 21,000 people behind. On 14 April, the commander at Flossenbürg received the following order from Himmler: ”Surrender is out of the question. The camp must be evacuated immediately. No detainee must fall into enemy hands alive” (10).

Except for a few individuals, the 45,000 detainees at Flossenbürg were taken on foot to the South, but here again all trace was lost of thousands of them along different itineraries of the death marches. On 23 April, the liberators found some 1,600 survivors at Flossenbürg. Neuengamme, on the outskirts of Hamburg, had been completely evacuated before the British troops arrived. The SS had taken the last 10,000 detainees to Lübeck in mid-April and put them on three ships which were mistaken for troop transport ships and bombed by British planes. 7,000 deportees were burnt alive, drowned or shot while trying to swim to shore. The Sachsenhausen and Ravensbrück camps, located in northern Germany, were almost completely evacuated before the detainees were liberated by the troops on 23 April, with 3,000 survivors at Sachsenhausen and, on 28 April, some 3,500 sick people and children at Ravensbrück. When they reached Dachau on 29 April, the American soldiers found some 30,000 detainees. The ”evacuation” begun on 27 April had been stopped because the SS guards had fled when they heard fighting with the American troops getting closer.

The liberation of the Mauthausen camp on 5 May not only put an end to the story of this camp opened in 1938 and its satellite camps where at least 100,000 people perished. The entire ”concentration camp world”, the principal instrument of terror used by National Socialist domination, ceased to exist. At all the camps, despite considerable efforts to provide medical care and to find food for the starving detainees, the dying continued even after liberation. The legal actions immediately undertaken by the Allied military tribunals to punish the crimes committed did not receive a positive welcome from the German population. It took several decades to overcome denial of the facts, even partially, and for an interest and some empathy for the victims to appear. Nowadays, testimony from the survivors comprises the essential basis for the new generations to understand what the concentration camp world was like until the liberation.