Most of the Portuguese servicemen have been laid to rest in the Richebourg military cemetery (Pas de Calais). The land was purchased in August 1924 and the Portuguese War Graves Commission undertook the task of finding and regrouping the bodies in conjunction with the French government (department of ex-servicemen and the 1st military region).

Between 1924 and 1938, the Richebourg cemetery received 1,831 bodies from various cemeteries in France (Le Touret, Ambleteuse, Brest etc.), Belgium (Tournai) and Germany for prisoners of war. It was extended in 1939, bringing its surface area to four thousand three hundred square metres. This cemetery contains 500 steles, each bearing the Portuguese coat of arms. Once through the wrought iron gate with its heart motifs, follow the alley of pine trees leading to the Memorial and the remembrance museum. The vegetation here is Mediterranean. Opposite is the Notre Dame de Fatima Chapel, built in 1976 in memory of the Portuguese soldiers who bore the brunt of the German offensive of April 1918. At La Couture, where they had valiantly withstood the German advance, the France-Portugal association had a monument built to the soldiers of the Portuguese expeditionary corps. The famous Christ of the Trenches, a cross damaged by shellfire and retrieved by Portuguese soldiers, was rebuilt at Neuve-Chapelle after the war. At La Couture, the monument, in stone bronze, is the work of sculptor A. Teixeira Lopez and was erected by Portuguese workmen. On one of the walls of the gothic church ruined by the war, an allegorical figure representing the Homeland brandishes the sword of Nun'Alvares, the supreme commander whose victory in 1385 over the Spanish at Aljubarrota marked Portugal's independence. It is shown coming to the aid of a Portuguese foot soldier trying to strike down Death with the butt of a rifle.
The Memorial of le Touret resembles a cloister with vaulted corridors in Portland stone. The square courtyard enclosed by three full walls and a colonnade forming a long gallery. The names of the 13,479 soldiers who died before 25 September 1915 are engraved on walls of the courtyard and the colonnade. There are small pavilions at each end of the gallery in the western corners of the courtyard. Today, in the cemetery itself, 900 dead are commemorated.
The hamlet of Saint Vaast is situated between the village of Richebourg and Goix-Barbee. A clinic was started in May 1915 during the Battle of Festubert and then used in the years that followed. A railway nicknamed "Tramway of the Trenches" transported men and ammunition. The cemetery currently contains about 800 British, Indian and German bodies, few of which have been identified.
At the beginning of March 1915, through their daring exploits, the allied air forces paralysed all German telephone communications in Menin (Belgium). In revenge, the enemy shelled Neuve-Chapelle, leaving it in ruins. For the Allies it was vital to take back Neuve-Chapelle. On 10 March 1915, British troops attacked the sector.
They were helped in their task by Indian troops. Sixteen thousand Indian soldiers, of whom 5,000 were never to be found, fought side by side. Three successive attacks came up against the fiercest resistance. A fourth resulted in the taking of 2,500 metres of trenches, before Neuve-Chapelle was taken back. Indians, English, Portuguese and French symbolised the friendship that united the soldiers. These men fulfilled their duty before they died. After them and in memory of their death, there remains this Memorial built to the glory of the 10,000 dead. The construction of this Memorial was ordered by the President of the Republic on 11 August 1926. (official gazette). The land on which it was built was purchased in perpetuity by the Imperial War Graves Commission. It is dedicated to the memory of those killed from the Hindu units and in particular to those "missing in action". It is built on land belonging to the commune of RICHEBOURG. In 1915 the place was known as"PORT-ARTHUR" The Memorial, whose architect was Sir HERBERT-BAKER, well known in India as one of the creators of the Delhi modern, is circular in shape and on its façade is a column (reminiscent of the pillars of ASOKA) about 16 meters high surmounted by an imperial lotus, the imperial crown and the "Star of India". It is flanked by two tigers. This column and the tigers are supported by a "podium", on which is engraved India 1914-1918. From the base of the "pedestal", a wall with cross-hatched ornamental apertures extends in a semi-circle and at each end of the semi-circle, there are two small "Chattri" domes, towards the East and the West. On the opposite semi-circle, which is solid, the names are engraved. In the middle of a lawn is the remembrance stone. The names on the Memorial are classed by units; within each unit by rank and within each rank in alphabetic order. There are 4,847 of them. They represent all English and Indian social classes. They share the same spirit expressed on the monument: IN HONOUR OF THE ARMY OF INDIA WHO FOUGHT IN France AND IN Belgium, 1914-1918, AND TO PERPETUATE THE MEMORY OF THEIR DEAD IN UNKNOWN GRAVES WHOSE NAMES ARE ENGRAVED HERE. In 1964, it was decided to add a special bronze panel to this monument on which are the names of 206 soldiers whose graves were in ZEHRENSDORF (East Germany) and could no longer be maintained. Work was completed in June 1966. IN MEMORY OF THOSE MEN WHO DIED IN CAPTIVITY AND WERE BURIED IN ZEHRENSDORF NEAR BERLIN. 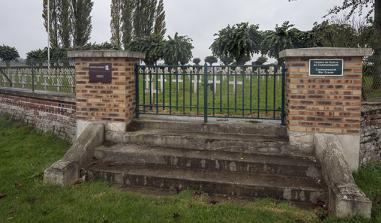 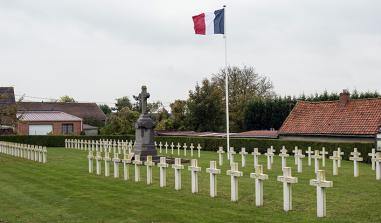 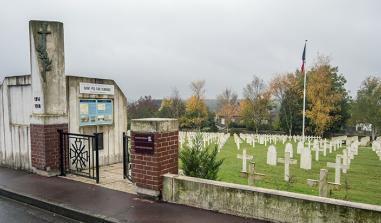