The "Normandie-Niemen", French fighters on the Eastern Front 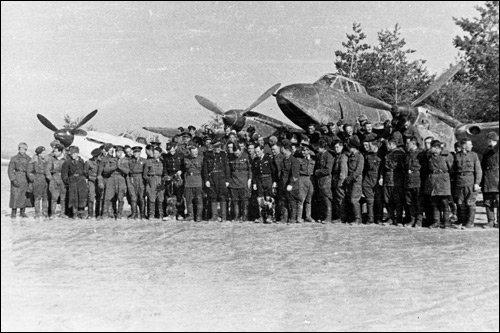 Polotniani-Zavod, the first battle ground of the "Normandie" squadron, 22nd March 1943.
Source: Collection of the Museum of the Order of the Liberation
Corps 1

In 1942 General de Gaulle sent a fighter squadron from the Free French Air Forces (Forces Aériennes Françaises Libres or FAFL) to fight alongside Soviet troops. The "Normandie-Niemen" group was to complete more than 5,000 sorties and 869 aerial combats. It was credited with 273 victories.

On the 22nd June 1941, German troops invaded The Soviet Union. General de Gaulle, keen to see the Free French (France Libre) represented on all fronts, considered sending a French division to Russia. However, problems of both a material and political nature forced him to revise his plans. In agreement with the Soviet government, he decided to send a French fighter group to fight alongside the Red Army on the Eastern Front.

The negotiations, which began in February 1942, resulted in an agreement with the USSR on the 26th November of the same year. In the meantime, General Valin, Commander of the Free French airborne forces, received the order to form an aerial unit comprising companies from Great Britain, North Africa and the Near East. The number 3 fighter group was created on the 1st September 1942 under the command of Commander Pouliquen. Formed in Rayak, in the Lebanon, it took the name the "Normandie". On the 12th November 1942, the group's sixty volunteer pilots and mechanics set off for the Soviet Union via Baghdad, Bassorah and Teheran. Their destination: Ivanovo, an air base situated 250 km to the north east of Moscow. The group's strongest contingent arrived at the end of November/ beginning of December 1942, joined in March 1943 by its last sections that had remained temporarily in Iran. Training on Soviet equipment began immediately in very harsh weather conditions, with temperatures fluctuating between -25° and -30°. In February 1943, Commander Pouliquen was transferred to the military mission in Moscow and was replaced by Commander Tulasne.

In March the following year the squadron, equipped with Yakovlev Yak 1 aircraft, was involved on the Germano-Soviet front. The Soviets emerged as winners of the Battle of Stalingrad, but German resistance to their counter-offensive was unremitting. Incorporated into the 1st Soviet Airborne Army, the unit temporarily came under the 204th aerial bombardment division. Based in the Monkounino area near Polotniani-Zavod, a hundred kilometres South West of Moscow, they began to operate in the region between Smolensk and Orel, carrying out various reconnaissance and escort missions. On the 5th April 1943, the squadron was engaged in combat, with the mission of escorting bomber aircraft between Roslavl and Smolensk. After enduring enemy antiaircraft fire, it was attacked by a fighter patrol. During the battle that ensued, two of its pilots, Preziosi et Durand, brought its first two victories by each bringing down a Focke-Wulf 190. This first mission was a success; thanks to the support from the French squadron, the Soviet bombers returned to the base without sustaining any losses. From then on, it was regularly involved in combat operations. Eight days later, there were further victories. During a fighter mission in the Spas-Demensk sector, six French patrol aircraft, under attack from forces superior in number, brought down three German fighters. The 13th April was, however, also a day of mourning, as the squadron grieved its first three losses: Lieutenants Derville and Poznanski and Officer Bizien did not return from the mission. From the 16th April onwards, the French took Mosalsk, situated some 40 km from their lines. Escort missions and attacks on German columns and aerodromes followed. The unit was now incorporated into the 303rd aerial fighter division under the command of General Zakharov (1st Airborne Army, 3rd Belarusian front).

In June and July new pilots arrived. Two squadrons were formed: the "Rouen" and the "Le Havre", under the command of Commander Pouyade and Captain Littolf respectively. The battle of Orel began on the 10th July. After a few scuffles, the fighting intensified. Between the 12th and 19th the group, about fifteen pilots strong and equipped with Yak 9 aircraft, carried out one hundred and twelve sorties and brought down seventeen planes. But losses were heavy: six pilots, including Commander Tulasne, who disappeared on the 17th July 1943 during an attack on a German motorised column. Commander Pouyade then took command of the group, which comprised of just eight able-bodied men. On the 4th August, the French mechanics were replaced by Soviet ones under the command of Captain Agavelian. The "Normandie" squadron, having received reinforcements, moved on towards Smolensk. It carried out several missions in the Ielnia and Smolensk sectors. Everywhere it went, the group distinguished itself, accumulating victories. But the losses were terrible. 1943 was a particularly bloody year for these men. Following the first six months of fighting, twenty-one pilots had died, been taken prisoner or disappeared and four others were wounded. On the 6th November the few survivors of the group, which had now tallied up more than seventy victories, withdrew to Toula for the winter.

During the winter of 1943-1944, the group was reorganised. Fifty-two new pilots from North Africa arrived as reinforcements. The group was increased to four squadrons: the "Cherbourg" and then the "Caen" were added to the "Rouen" and the "Le Havre". At the end of May, the regiment returned to the front. In June, it took part in supporting the Soviet offensive in Belarus and then in Lithuania. In less than three weeks, Soviet troops advanced more than 400 km to the west. In July the group took part in the battle to breach the Niemen, ensuring the protection of troops. The Red Army managed to open a gap in the enemy's lines more than 200 km wide and 50 deep. For its daring deeds, the "Normandie" received the title "Niemen Regiment" from the Soviet Supreme Commander and thus became the "Normandie-Niemen".

On the 16th October 1944, the Prussian offensive began. In just one day, the regiment, equipped with Yak 3 planes, brought down twenty-nine aircraft, without any losses. After a week of fighting, the first Soviet units breached German lines. There were numerous assignments against the enemy rearguard.

On the 27th November, pilots landed for the first time on Prussian territory. On the 6th December 1944, all the men of the "Normandie-Niemen" arrived in Moscow to meet General de Gaulle on an official visit to the Soviet Union. The regiment's pennant thus came to bear the Croix de la Libération (Liberation Cross).

Commander Pouyade, followed by the regiment's "old hands", returned to France. Commander Delfino then took over at the head of the regiment. The third campaign took place between January and May 1945 in the Königsberg region, in eastern Prussia. German troops tried in vain to resist the Soviet advance. The last pockets of resistance fell one after another as Berlin was surrounded. In both the east and the west, the defeated German troops capitulated in Berlin on the 9th May.

It was only a question of days before its return to France. On the 1st June 1945, the regiment was in Moscow. To their great delight, the pilots of the "Normandie-Niemen" learned that the USSR had donated the forty Yak 3 aircraft flown by the regiment to France; on the 15th June, it was at the controls of their aircraft that they took off from the airstrip at Elbing. On the 20th, following stopovers in Prague, Stuttgart and Saint-Dizier, they arrived at Le Bourget to a triumphant welcome.

After more than 5,000 sorties and 869 combats, the "Normandie-Niemen" regiment had a total of 273 official victories and 37 probable ones. Forty-six out of the hundred or so pilots that had passed through its ranks were dead or missing. Cited eleven times, the "Normandie-Niemen" was decorated with the Légion d'honneur (Legion of Honour), the Croix de la Libération, the Médaille militaire (Military Medal) and the Croix de guerre (War Cross) with six palms, as well as the Soviet orders of the Red Flag and Alexander Nevski.

After the war, the group was not disbanded. From 1945 to 1947, fighter group 3/5 with its Yak 3 and NC 900 aircraft became the 2/6-fighter group and received some English Mosquitos. From October 1949 to May 1951, equipped with P 63 Kingcobra and then Hellcats, it took part in the Indochina war (1946-1954). In December 1951, the group left for Oran in Algeria, where, in June 1952, it received its first jet fighter, the "Mistral". On the 17th November 1952, the "Normandie-Niemen" fighter group split into two squadrons: the 1/6 "Oranie" and the 2/6 "Normandie-Niemen", thus forming the 6th fighter squadron. After the war in Algeria (1954-1962), it became the 2/30 all-time fighter squadron based in Orange, where it was given the responsibility for the aerial defence of the South East of France. In June 1966, the squadron took over the Reims airbase, where in 1976 it received the air force's first Mirage F1 C. In 1993, the group moved to Colmar and became the 1/13-fighter squadron. With the dissolution of the 13th fighter squadron in 1995, it became the 2/30-fighter squadron once again. The squadron has been involved in several peacekeeping operations such as Operation Turquoise in Rwanda and Operation Deny Flight in Bosnia-Herzegovina under the UN and in Kosovo alongside NATO.

On the 3rd July 2009, the squadron was officially suspended. The Normandie-Niemen museum, established in Andelys, in the Eure département, will close permanently at the end of 2010 with its collections being taken by the Air and Space Museum in Le Bourget. The Normandie-Niemen may be reformed in 2011 or 2012 at the Mont-de-Marsan air base.