The memorial landscape of Oradour-sur-Glane is striking for its uniqueness. After the war, it was decided that the ruins of the village should be preserved “as they were”. Over the years that followed, many voluntary organisations and government agencies were faced with the challenge of maintaining the site, requiring them to reflect on the marks left in the landscape by the traumas of war.

The story of Oradour-sur-Glane is that of a small Limousin village where, on 10 June 1944, the Waffen-SS “Das Reich” Division massacred 642 people in one afternoon – 205 men, 244 women and 193 children – then sacked and burned the buildings, before disposing of the bodies. For years, the main feature of Oradour’s memorial landscape was a series of ruins unlike any others in Europe – over 15 hectares of destroyed buildings – that were subject to specific conservation standards (“ruins to be preserved as they are”) determined by its listed historic monument status. 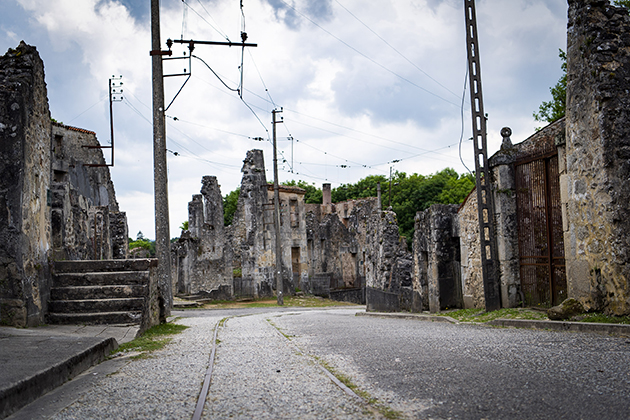 Even before the war was over, a protection scheme was put in place for the ruins and plans were drawn up for the construction of a new village nearby. On 4 March 1945, General de Gaulle decided to make the ‘martyr’ village a “symbol of the suffering of the French people during the four years of the occupation”. The following year, a bill concerning “the preservation of the ruins and the reconstruction of Oradour-sur-Glane” was voted without debate in the National Assembly. Preserving the ruins “as they were” was no mean feat. Remedial work was required – construction of a boundary wall, protection of the church and the walls of a number of houses against bad weather, removal of rubble from the streets and consolidation of ruins at risk of collapse – without altering their appearance. This made the village into a landscape of preserved ruins, which over the years has attracted hundreds of thousands of visitors.

In the 1950s, the French government decided to erect a memorial near the ruins. The structure, designed by architect Jean Creuzot, consists of a square crypt with four rectangular apsidal chapels, two-thirds beneath the ground; on the terrace that constitutes its roof stands a stylised dolmen, symbolising sacrifice; the whole overlooks a large esplanade. The crypt was intended to house the ashes of the dead, and the commemorative ceremonies were to take place outside. But that did not happen, for it coincided with the end of the “Bordeaux Trial”, a fresh trauma for the families of the victims who had requested this memorial “to prove to the world that France is a country which sets store by remembrance and honour”, in the words of the chair of the National Association of Families of the Martyrs, on 10 June 1947.

The 1953 trial satisfied no one and sparked a conflict among French people, the scars of which persist to this day. The presence of Frenchmen from Alsace in the SS forces – those of them who were forcibly conscripted were eventually granted an amnesty – was an impediment to the issuing of a pardon and prevented closure for the mourners of Oradour. The memorial was therefore rejected. The victims’ remains were transferred to the top of the village cemetery and buried in a vault that became known as the “Tomb of the Martyrs”. An ossuary was built above it, comprising two glass coffins. The ensemble’s tall fanal (column topped with a lantern), coupled with the fact that the victims’ remains were on display, made it the antithesis of the other memorial. Here is where the commemorative ceremonies would be held.

From 1953 onwards, the memorial landscape was thus fragmented across three distinct sites: a historic monument, unique in Europe; a crypt with an esplanade without a use; and the village cemetery, where the Tomb of the Martyrs was located, to which many ex-votos were added over the years.

This arrangement remained unchanged until after 1970, when the Association of Families installed display cases in the memorial crypt to house the victims’ personal belongings, found among the ruined houses, constituting so many relics.

The shift among historic monuments towards ecomuseology led to the emergence of a fourth site, the Centre de la Mémoire, or ‘Remembrance Centre’, which completed the overall landscape and even partly altered it, by forming a connection with the new village. Over the years, various works have been carried out in the ‘martyr’ village which might be described as “landscaping”, although that term has not been used: maintaining the road surfaces, cutting the grass in the open spaces, pruning the hedges and garden and wall vegetation, planting trees around the Le Martyrium esplanade. As a result of these transformations, and the wind and rain washing away the black marks from the fires and polishing the stone, by the 1990s the village ruins looked more like the remains of a peaceful 1930s village than the scene of unprecedented violence. It was therefore decided that a purpose-built visitor centre was needed and, in 1999, the Centre de la Mémoire was officially opened by the French president. The aim of the centre was to provide visitors with scientific resources on the massacre, in order to give them a better insight into their surroundings.

The building was designed to blend in with the memorial landscape. A buried half-dome from which issue only rusty metal blades, symbolic of how Nazi violence tore the village apart, the centre reinforces the message conveyed by the ruins, which remain essential and are in no way concealed. This new building forms a tangible link between the ruins and the new village, which previously had their backs to one another, with a wide esplanade joining the new Oradour church to the ‘martyr’ village.