Rear Admiral Luc Pagès is defence attaché at the French Embassy in London. He acts as intermediary for French remembrance policy in the United Kingdom. For the 80th anniversary of 1940, he is organising a series of cultural and educational events. 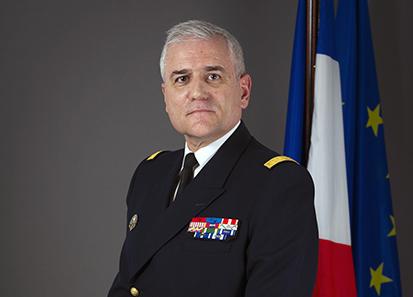 What place does General de Gaulle have in the British memory?

In the British memory, General de Gaulle is recalled variously as the leader of Free France who had an at times tumultuous relationship with Winston Churchill, and the head of state who opposed Britain’s entry into the European Economic Community. However, in London his memory lives on, in the emblematic sites of Free France, which came into existence in the British capital.

The General’s memory is preserved by people of different generations who are keen to pass on the history of Free France and how its forces were organised. The oldest among them saved a handful of BBC archives from destruction when it partly relocated to Manchester. Others keep the memory of General de Gaulle alive at the French lycée in London that bears his name, with souvenirs of Free France exhibited in display cases to remind students what those troubled years were like.

Also worth mentioning is Éric Simon’s guide book Londres au fil de la France Libre, which offers a walking tour around the key sites of Free France in the British capital. In another register, Hubert Rault offers guided history tours in the footsteps of de Gaulle and Winston Churchill. While 18 June does retain a strong symbolism among London’s French community, the memory and traces of Free France go far beyond that one important event.

Are there events planned in the British capital to mark the 80th anniversary of the Call to Arms?

The Franco-British Society will be holding conferences on this theme and on the relationship between de Gaulle and Churchill. The Amicale Gaulliste du Sénat (the French Senate group concerned with preserving de Gaulle’s memory) will be represented by some 50 of its members.

What partners is the French defence mission working with to organise these commemorations?

The defence mission has ties with London’s two French lycées, the Lycée Charles de Gaulle, whose buildings served as the headquarters of the Free French Air Force, and the Lycée Winston Churchill in Wembley. Both schools are closely associated with the commemorative ceremonies, in particular Remembrance Day, in which they play an important part. 18 June is more difficult, since it coincides with the summer term examination period. Nevertheless, both institutions are keen for their students to take part in these important events.

We also have links with the Musée de l’Armée in Paris: in 2020, it, too, will be devoting its programme to 1940, which saw the creation of French units like the 13th DBLE (Demi-Brigade of the Foreign Legion), the 1st Air Infantry Company, forerunner of the 1st RCP (Chasseur Paratroopers Regiment), as well as the creation of our special forces.

Finally, we have links with King’s College London and University College Durham, but for another project in 2020: a symposium to mark the 150th anniversary of the Franco-Prussian War, many aspects of which prefigured the resistance of 1940.