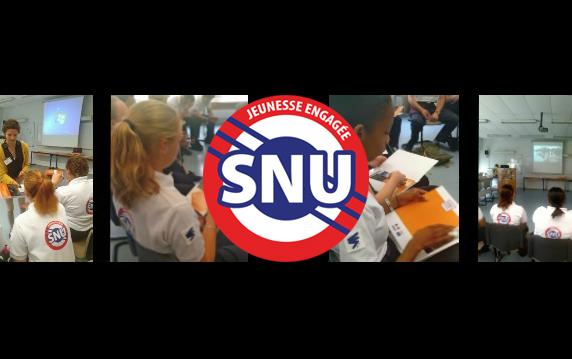 The Service National Universel (Universal National Service, or SNU) is for all young people aged 15-17 years. Its purpose is to strengthen the national cohesion of young people around republican values and promote civic engagement among the younger generation.

Phased in gradually since June 2019, the idea is for Universal National Service to become widespread. For the time being, its implementation relies on volunteers, and anyone can enrol to become a fully participating citizen.

Stage 1: The national remembrance content of the cohesion trip

Details of the aim and national content of the cohesion trip are provided on the SNU website.

As part of the cohesion trip, the Ministry of the Armed Forces offers a Defence Remembrance Day, comprising a 60-minute remembrance module devised and run by the DPMA, in partnership with the National Office for Veterans and Victims of War (ONAC-VG), to raise young people’s awareness about remembrance issues and heritage.
This module aims to get across why national remembrance is so important, what it enables, and why and how it should be preserved.

Community service assignments in the field of remembrance may take the form of a wide variety of initiatives, on remembrance sites, in ceremonies, with memorial associations and veterans’ groups. They are a practical way of bringing national memory to life and passing it on to the younger generation.

The varied choice of community service assignments available means that everyone should be able to find one to suit their preferences and skills. Download the 2019 list

These optional three-month placements are for young people aged 16-25.

For the placements on offer in the sphere of remembrance, the DPMA gets involved, welcomes the young people and actions the ONAC-VG and its partners – veterans’ associations, the Museums and Memorials of Contemporary Conflicts (MMCC) network and the trinômes académiques (joint defence and education committees) – in order to offer a remembrance programme in keeping with the SNU’s goals.