The aim of the Vauban tower was to defend Brest harbour from enemy invasions and pirates.

The tower was built close to Notre Dame de Rocamadour chapel, at the end of the breakwater which protects Camaret port, at the entrance to the Crozon peninsular. It was part of a complex strategy designed to defend Brest harbour from enemy invasions and pirates.

The tower was built between 1693 and 1696 under the supervision of the engineer Jean-Pierre Traverse. It has four floors (basement, ground floor and two upper floors) and is 18m high to the roof.

The basement, with trap door access, was used to store food and powder.

A spiral staircase leads to the upper floors which housed the guard room and accommodation.

The hexagonal tower features arrow slits for defensive purposes. Acute angles of attack mean that projectiles could be deflected. It is also known as the Tour Dorée (Golden Tower) because the base is finished with a coating made from crushed bricks.

The tower is flanked by a low, semi-circular battery with wide embrasures for eleven canons and a defensive guard room. A second guardroom was later built on the site of the shot furnace. A beam drawbridge provided access to the site and the footbridge to the tower.

In June 1694 the tower, as yet unfinished, suffered its first attack, from the Anglo-Dutch Augsbourg League, whose aim was to take control of Brest Harbour. The tower was armed with just nine canons and three mortars, but the effectiveness of its defensive system was clear immediately. The 1,500 coalition men who had landed on Trez Rouz beach in front of Camaret were routed in a few short hours, suffering heavy losses. 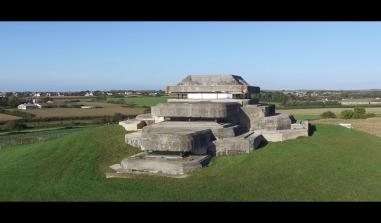