In 1831, the French Conquest of Algeria had just started and further reinforcements were already being called for. The Legion was created precisely to provide these extra troops. It was formed of regular soldiers from all across Europe who were left unemployed after the imperial and revolutionary wars and sought refuge in France. To facilitate the recruitment of foreign nationals who having hastily fled their country did not have any papers, the legislator authorised that men could be hired on simple declaration of their identity. Thus, the law of 9 March 1831 and its application decree of 10 March contained the two essential principles that still make the Legion so particular today: a dedicated overseas service role and the option to enlist under a pseudonym (”declared identity”). The first legionnaires landed in Algeria in August 1831. On 27 April 1832, they received their baptism of fire in front of Maison Carrée and, during the course of combats, carved out their reputation as tough and valiant fighters. At the same time, as the French army progressed, swapping between the pickaxe and the rifle, they imposed a style that would soon become the hallmark of the Foreign Legion and its ”soldiers-cum-builders”. The Legion's masterpiece was creating a whole town in 1843: Sidi-bel-Abbès, the site of the headquarters and capital of the French Foreign Legion. 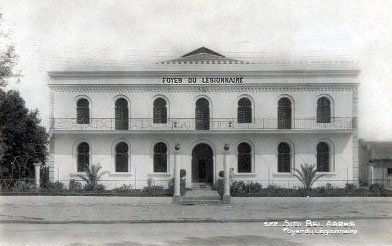 On 29 June 1835, four years after it was founded, the Foreign Legion was handed over to the Spanish government to support Queen Isabella II's to support her fight against the Carlist uprising. Of the 4,000 Legionnaires who followed their officers to Spain, only 500 survivors returned to France in 1838 after three years of harsh warfare. This campaign saw the introduction of one principle that remains in force today: the amalgamation of troops.
Dissatisfied with the system of battalions organised by nationality, General Bernelle decided to mix the legionnaires into units regardless of their country of origin, and enforced French as the language of command.
On 16 December 1835, Louis Philippe decided to create a new Foreign Legion in an effort to compensate for the troops lost in Algeria. As a result, in 1840, the Legion was split into two regiments.
While continuing its fighting in Algeria, the Legion took part in the campaigns launched during the Second Empire. First, the Crimean War (1854-1856), with the siege of Sevastopol, then the Campaign of Italy (1859), where the Legion acquitted itself particularly well in the Battles of Magenta and Solferino.
Finally in Mexico, where the Foreign Legion earned its legendary status in the Battle of Camarón. The heroic resistance of the company under Captain Danjou in the Hacienda Camarón was adopted as a symbol and as a model of combat across the Legion.
In 1870, France faced tensions against the Kingdom of Prussia. For the first time, and contrary to the laws set down in 1831, the Legion was ordered to serve within Metropolitan France with the Armée de la Loire forces. 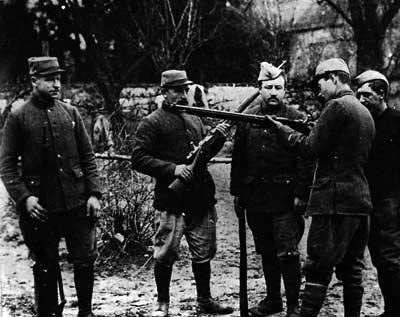 In 1833, France relaunched its policy of colonial expansion. The government recruited bigger numbers in the Foreign Legion and made the force the spearhead of its expeditionary corps wherever it wanted to impose its presence: in Tonkin from 1883, Formosa in 1885, Sudan from 1892 to 1893, Dahomey from 1892 to 1894, Madagascar from 1895 to 1905, and Morocco from 1900 to 1934. Day to day, the Legion actively participated in expanding the colony through its civil engineering projects.

The Foreign Legion was serving in Morocco when the First World War erupted. Five march regiments were formed and then reorganised into a single regiment on 11 November 1915 due to severe losses to create the RMLE or the Foreign Legion Marching Regiment. Colonel Rollet, who took command of the RMLE after the death of Colonel Duriez, killed leading his men, returned from four years at war with the most decorated flag of the French army with that of the Colonial Infantry Regiment of Morocco. 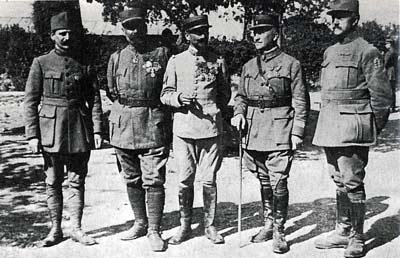 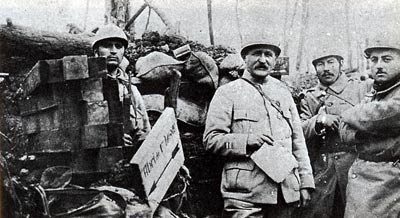 From 1920, the Foreign Legion was engaged in two theatres of war: in the Levant (Syria and Lebanon) as part of a mandate ordered by the League of Nations and in Morocco on pacification duties. The continued to leave their stamp on the landscape as shown by the tunnel in Foum Zabbel bore through granite along the road between Ziz and Morocco by the 3rd Company of ”Sapeurs Pionniers”.
It was at the start of the Second World War that the Foreign Legion had the highest number of troops in its entire history, having recruited 45,000 men. The 11th and 12th Foreign Infantry Regiments (REI), the 97th Group, and the 21st, 22nd and 23rd Marching Regiments of Foreign Volunteers (RMVE) were killed during the Armistice Day Storm of 1940. The very young 13th Demi-Brigade of the Foreign Legion earned a reputation in Norway fighting in the Battle of Narvik. Next it undertook a mission that would lead it to Bir-Hakeim until its final victory alongside the 1st Foreign Cavalry Regiment (REC) and the new RMLE.
While the war was coming to an end in Europe, the Japanese made a surprise attack on 9 March 1945 on all the French garrisons in Indo-China. An epic retreat, energetically led by General Alessandri allowed the 5th REI, the Regiment of Tonkin, to reorganise in China, after two months of marching and fighting. Notching up over 9,000 deaths, the Foreign Legion made a significant contribution to liberating Europe but there would be no time for rest.
Corps 2

From 1946, the 2nd REI, the 13th Demi-Brigade of the Foreign Legion, the 3rd REI and the 1st Foreign Cavalry Regiment landed in Indochina and received backup from a new type of unit: the Foreign Parachute Battalions. In this war during which the government did not want to engage its contingent, the Foreign Legion was called to arms with troops of up to 30,000 men, a large majority of which were German. From Phu Tong Hoa to Dien Bien Phu, the Legion lost some 300 officers, including four commanders in chief, and over 10,000 non-commissioned officers and legionnaires. This campaign was the bloodiest in the entire history of the Foreign Legion.

Even before the hostilities ended in Indochina, the first troubles appeared in North Africa. The Legion was sent to fight first in Morocco and Tunisia and then in Algeria. In 1962, the Legion left Algeria, which had recently achieved independence, and the monument to the dead in Sidi-bel-Abbès was moved to Aubergine.

Between 1962 and 1969, the Foreign Legion went through some changes. Forever present in the Overseas Territories, in Madagascar and then in Guiana, Dijbouti, French Polynesia and the archipelago of the Comoros Islands, the legionnaires became builders once again: the 5th Foreign Regiment created in French Polynesia the necessary infrastructure for the French nuclear tests. In Guyana, the 3rd Foreign Infantry Regiment forged the road in the East and built the launch site at the Guiana Space Centre. In mainland France, the legionnaires worked on the construction of tracks at the large military camps in the south of France.

The Foreign Legion's operational activities recommenced in the 1970s. The Legion first served in Chad, from 1969 to 1970, and returned to the country from 1978 to 1988. In 1978, it was put under the spotlight with the intervention of the 2nd Foreign Parachute Regiment in Zaire. The Regiment's daring airborne operation led by Kolwezi helped save the European population from massacre. In 1983, the Legion was engaged in Beirut, as part of the multinational security force.

In 1991, during the Gulf War, over 2,500 legionnaires took part, within the Daguet Division, in the victorious Operation Desert Storm. The 1st Foreign Cavalry Regiment, the 2nd Foreign Infantry Regiment and the new 6th Foreign Engineer Regiment were each awarded the Order of the Army. From that time, the Legion and the rest of the French army were involved in more and more operations that were increasingly multinational. 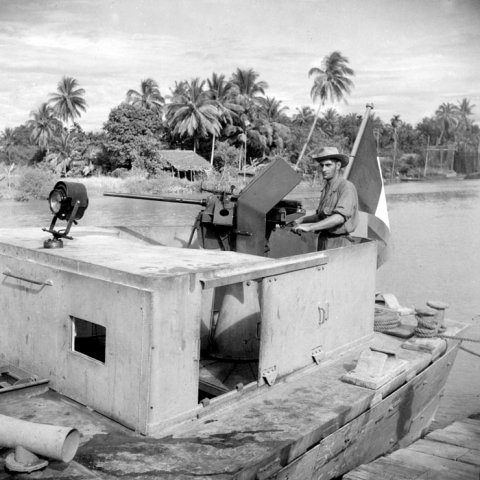 On patrol on a river in Cochinchina, a soldier stands at his fire stand on board one of the Engineer Regiment's armoured vessels. The machine gun is a 12.7 mm Browning (.50 calibre). December 1947. Source: SCA - ECPAD Photo: Verneret 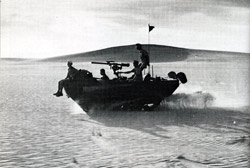 The Legion's peace-keeping missions started in 1992 under the aegis of the United Nations. The Legion was sent to Cambodia in 1992 and 1993, in Somalia in 1992 and later in 1993, and in Rwanda from July to September 1994 as part of Operation Turquoise. Since 1993, the Legion's units followed one after the other in the former Yugoslavia in every position imposed by the mandates set by the French army.
In 1996, in Bangui, and in 1997 in Brazzaville, the Legion participated in operations aiming to protect French nationals.
During the course of 2003, the units of the Foreign Legion were deployed in Afghanistan as part of Operation Pamir, in Côte d'Ivoire, in Operations Licorne and Corymbe, in Kosovo in the KFOR, as well as in Chad, Djibouti, Gabon, Mayotte, Guyana and many other places. 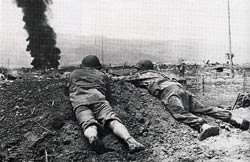 Legionnaires at the start of the Battle of Dien Bien Phu. 13 March 1954. Source: ECPAD