Cover photo: Honoré d'Estienne d'Orves in 1930. Source: Ministry of Defence History Department (Service Historique de la Défense, or SHD) *
Corps 1
When the Armistice was signed on the 22nd June 1940, naval officer Henri Louis Honoré d'Estienne opted for covert means of tackling Nazi Germany. A year later, this trailblazer for the Résistance was sentenced to death for spying. On the 29th August 1941, he was executed by the Nazis at the fort at Mont-Valérien, along with two Résistance comrades, Maurice Barlier and Yan Doornik. I - D'Estienne d'Orves before 1940: a naval officer with a global outlook 1901 - 5th June, the birth of Henri Louis Honoré, Count d'Estienne d'Orves, at Verrières-le-Buisson (Essonne). He came from a long line of nobility: a family of Provencal origin, the d'Estiennes, on his father's side and the Vilmorins on his mother's side.
Corps 2
1917 - D'Estienne d'Orves passed his baccalaureate. 1921 - D'Estienne d'Orves enrolled at the École Polytechnique. His fellow students described him as an affable, spiritual man with an enquiring mind. 1923 - On leaving the Polytechnique in August, d'Estienne d'Orves served in the navy. In October he was a trainee officer on board the Jeanne d'Arc. Subsequent voyages would take him to new horizons: from Brazil to China and from Morocco to Bali. His stopovers were opportunities for him to learn about and to try to understand the people and their culture. 1929 - D'Estienne d'Orves married Éliane de Lorgeril. They went on to have five children. 1939 - Start of the Second World War On the 3rd September France and the United Kingdom (the Allies) declared war on Nazi Germany, in response to the invasion of Poland by Hitler's troops.

Lieutenant of Vessel d'Estienne d'Orves was posted to the cruiser Duquesne onto the general staff of X Force who, under the orders of Admiral Godfroy, were to strengthen the British fleet of Admiral Cunningham in the eastern Mediterranean. II - D'Estienne d'Orves in 1940: a trailblazer for the Résistance against Nazi Germany 22nd June 1940 - the Pétain government signed the armistice When the Armistice was reached, d'Estienne d'Orves was in Alexandria with "X" Force. A tacit agreement between the French and British admirals had avoided any confrontation between the former allies, but the French ships were immobilised. D'Estienne d'Orves then chose to carry on the fight, disobeying his immediate superiors. His decision was not taken lightly, as he regarded the duty of obedience very highly. However, he believed that a fight could never really be lost whilst there was still the possibility of free action. July 1940 - D'Estienne d'Orves chose the Résistance movement against Nazi Germany In a letter dated the 10th July, addressed to Admiral Godfroy, d'Estienne d'Orves made known his intentions to continue the fight against Nazi Germany using the following words: "... You can guess my feelings. I was brought up in the belief in Patriotism - so, I am sure, were my comrades - but 1870 and 1914 had such an impact on both my parents and myself that I cannot currently understand France's subservience. Without wishing to judge the Department, I do not believe I am qualified to rebuild France in the way that is being suggested. As long as there is a glimmer of hope I will fight to rid my country of the stranglehold of this man who wants to destroy our families and our traditions..."

D'Estienne d'Orves took the pseudonym "Châteauvieux" (from the name of one of his ancestors). He established a commando unit of several men, officers and marines from "X" Force's ships: the 1st Marine Group. Its services were offered to General Legentilhomme, the commander of French troops in Djibouti, who was looking to muster the colony's support for General de Gaulle. With a few marines, he reached Suez where he met Colonel de Larminat who had just joined the Free French. On the 23rd July 1940, d'Estienne d'Orves disembarked from the Antenor in Aden to learn that Legentilhomme's plan had failed. So he decided to go to Great Britain where French vessels were awaiting crews.

September 1940 - D'Estienne d'Orves joined the Free French in Great Britain Embarking on the 2nd August, d'Estienne d'Orves and his comrades arrived in London at the end of September. On the 1st October, d'Estienne d'Orves was promoted to Lieutenant Commander. He was appointed to the 2nd bureau at the general headquarters of the Free French Naval Forces. As deputy to Colonel Passy, the head of the central bureau of information and action (le Bureau central de renseignement et d'action or BCRA), d'Estienne d'Orves laid the foundations of the Nemrod network. The vital task of the Free French's information department was to discover the movement of enemy troops, the location of aerodromes and the positions of batteries etc. Several agents had already been sent with this objective to the French coast in order to establish contacts. On the 6th September 1940, Maurice Barlier was the first to reach France; Jan Doornick was to follow on the 1st October. D'Estienne d'Orves wanted to be on hand to personally coordinate the action of his men, establish vital contacts and recruit other agents. So he took over the department, Passy having been assigned temporarily to other duties. December 1940 - D'Estienne d'Orves, known as "Jean-Pierre", returned to France to expand the Free French information service On the 21st December, the trawler "Marie-Louise" left Newlyn, in Cornwall, with d'Estienne d'Orves - now "Jean-Pierre" - and Alfred Geissler, a young radio operator from the Alsace known as "Marty", onboard. They arrived that same evening not far from the Pointe du Raz, to be accommodated in Chantenay, near Nantes. In Lorient and Nantes they met members of the Nemrod network.

On the 25th December, the first radio link between occupied France and London was established. Barlier's mission was to prospect in the Bordeaux region, with d'Estienne d'Orves taking care of the North and the Paris area. On the 27th December d'Estienne d'Orves was in Paris, where he met leaders of other Résistance networks. From Brittany "Marty" regularly sent important messages back to London. However, he proved to be incredibly careless, committing several indiscretions. III - D'Estienne d'Orves in 1941: a hero of the Free French, executed by the Nazis at the fort at Mont-Valérien January 1941 - D'Estienne d'Orves an his comrades were denounced and arrested On the 19th January 1941, d'Estienne d'Orves was back in Nantes. He decided to take "Marty" back with him to England on his next voyage. However, "Marty", the son of an Alsatian pro-Nazi and himself a Germanophile, had that same day made contact with the German counter-espionage service, providing the names of the thirty four members of the network. Arrests consequently followed. D' Estienne d'Orves was arrested during the night of the 21st to the 22nd January. In Nantes, the prisoners were subjected to their first interrogations. They were then transferred in turn to Angers, Paris et Berlin, whilst "Marty" carried on transmitting false messages to London until February. February 1941 - D'Estienne d'Orves and his comrades were incarcerated in Paris On the 26th February D'Estienne d'Orves and his comrades were incarcerated once more at the Cherche-Midi prison in Paris. May 1941 - D'Estienne d'Orves was sentenced to death for spying On the 13th May 1941, d'Estienne d'Orves and twenty six of his companions appeared before the German court martial in Paris. During the trial, which lasted twelve days, d'Estienne d'Orves covered for his co-defenders. The military judges pronounced nine death sentences and other prison sentences, but not without paying tribute to the convicted men. Appeals were lodged. The suspended sentence given to d'Estienne d'Orves has been explained in different ways: some see it as the military commander in France, Von Stülpnagel's wish to wait for a spectacular opportunity to dampen spirits; others remember that the conviction stirred up strong feelings in the navy, in London and also in Vichy, to the point where Admiral Darlan intervened with the German authorities. In prison at Cherche-Midi and then at Fresnes, d'Estienne d'Orves read, meditated, prayed, wrote commentaries on the great literary classics and kept up the morale of his fellow prisoners. Above all, he wrote. His diary is a testament, almost in the religious sense of the term: he tells his nearest and dearest about his childhood, justifying his involvement as both a Christian and a soldier. Periods of hope and disappointment followed as the days passed. His lawyer, Oberleutnant Mörner, seemed confident.

August 1941 - D'Estienne d'Orves was executed by the Nazis at the Fort at Mont-Valérien On the 21st August, Midshipman Moser, a German soldier from the Kriegsmarine, was killed in Paris in the Barbès-Rochechouart underground station. On the 22nd August, General Schaumburg, commander of "Gross Paris", signed the order that would turn the arrested Frenchmen into hostages. At the same time, the military commander in France, Von Stülpnagel, probably used the opportunity to make an example out of those prisoners already sentenced to death by executing them.

On the 28th August 1941, in his last letter to his sister, d'Estienne d'Orves wrote about France: "I am dying for her, for her full freedom and hope that my sacrifice will be of some use to her" D'Estienne d'Orves had also written: Don't hate anyone because of me - everyone has done his duty for his own country. Learn instead to recognise and better understand the character of France's neighbouring nations ". On the 29th August, Barlier, Doornik and d'Estienne d'Orves were taken to the fort at Mont-Valérien. Their six other comrades had been pardoned. A few minutes before he died, the naval officer proved true to himself, publicly pardoning his judges. He requested not to have his hands bound or his eyes blindfolded. At 6.30 am, the three men were shot. On the 30th August 1941, Parisians were to learn, through a yellow poster with black border mounted on the walls of the capital, that Henri Louis Honoré, Count d'Estienne d'Orves, sentenced to death for spying by a German court, had been shot the previous day, along with Maurice Barlier and Yan Doornik. 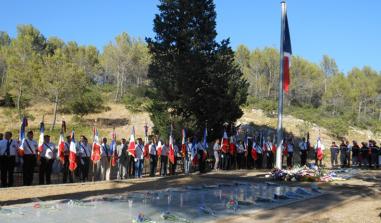