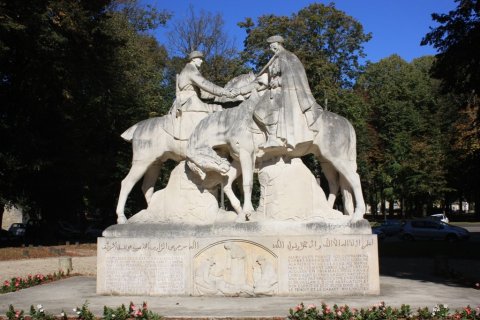 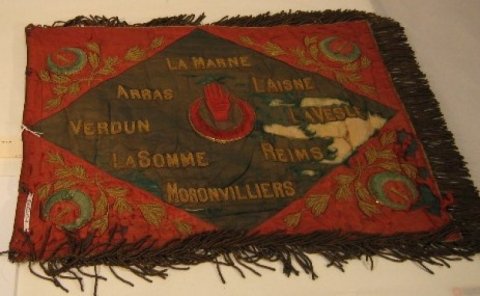 All of these units together with the others (Zouaves, African Hunters, bataillonnaires (African light infantry soldiers) and legionnaires) formed the 19th Army Corps (CA), still named the Army of Africa, whose HQ was based in Algiers. 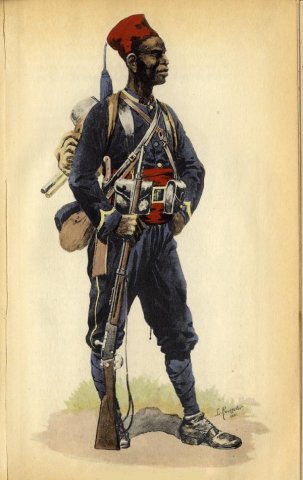 All senior officers were from mainland France, but there were numerous indigenous officers and non-commissioned officers among the lower ranks, including Captain Khaled Ould el Hadj Abd el Kader, grandson of the emir brought down by Duke d'Aumale, who served in the 1st Spahis. 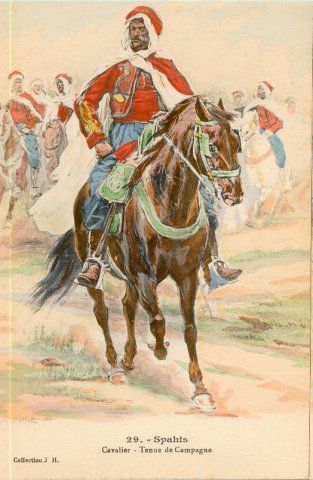 The Algerian troops were clearly held in high esteem since, in 1913-14, a single infantryman or spahi earned on average four and a half times more than a private from the mainland (22 centimes a day compared to five), provided they were in one of the three oldest regiments. 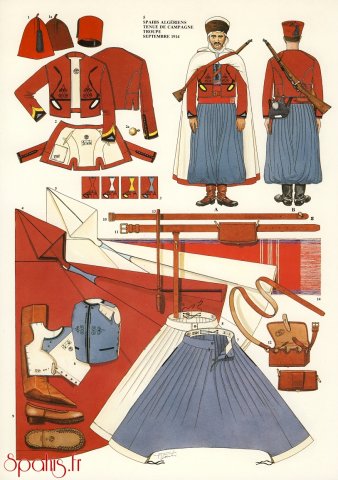 In August 1914, the 19th AC sent three infantry divisions to France - the 37th, the 38th and the 45th ID, which consisted of a number of marching regiments trained by the infantry and spahis. Morocco sent indigenous hunters, the future RMT, a division that the enemy nicknamed the ”Swallows of Death” for the dread they instilled. On 15 March 1915, in Champagne, one of their officers was wounded during the attack on Mesnil-lès-Hurlus. This captain went on to achieve glory in 1943-44: apppointed general, he went on to command the French expeditionary corps in Italy and win the Battle of Garigliano and returned to Rome victorious - Alphonse Juin was made Marshal of France in 1952. The Moroccan 2nd ID and 4th MD, the Algerian 3rd ID, including the Tunisian 4th IR and groups of Moroccan tabors, all inherited the qualities of courage and endurance of their predecessors from 1914-18.
In 1915, the cavalry tabors formed the RMSM (Moroccan spahi marching regiment) which was the only unit in the French army to capture one of the highest chiefs in the German imperial army - in fact the only noteworthy prisoner made during the war, Marshal Von Mckensen. 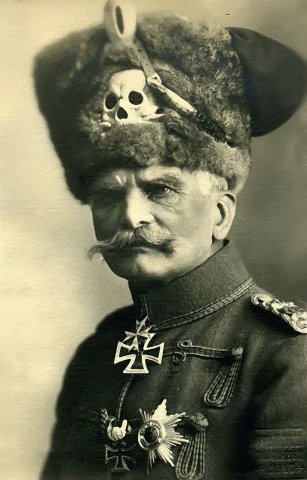 Mackensen in Belgrade between 1914 and 1915. Source: Public domain.

The marshal was caught in Budapest where he had been recently imprisoned by the Hungarian Republicans, in November 1918. The RMSM had carried out the 70-km raid in enemy territory under horrific conditions, at some 2,000 metres altitude without roads or maps or the support of the infantrymen or 75 batteries, taking Uskub, in Serbian Macedonia on 29 September 1918, with the African Hunters led by General Jouinot-Gambetta.
A number of formations were founded between 1915 and 1918: the RMZTs, where a battalion of North-African infantrymen were placed side by side with two Zouave battalions, the 10th, 11th, 13th, 14th and 21st RMTA, the 1st and 2nd RMTM, the 48th ID, etc. One point worth noting, the famous Moroccan Division, the 1st MD, was not formed of indigenous Moroccan units but Tunisians, Algerians, legionnaires, and Zouaves from the 4th RTT, 7th RTA and RMLE, 8th Zouaves, riders from the 5th RCA, firefighters and infantry from the 2nd Engineering Corps and the 276th RAC. 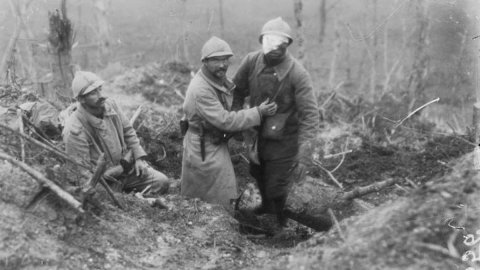 The North African troops were constantly engaged in the toughest sectors along the main fronts, including Egypt and Palestine alongside the British. The mixed regiment of African cavalry (spahi and hunters) took Nablus, swords drawn, on 19 September 1918, capturing 2,000 Turkish soldiers and their equipment.
They were awarded prestigious distinctions: The fourragère (military award shaped as a braided cord) of the Legion of Honour to the 2nd and 7th RMTA, 4th RMTT and 4th RMZT; the fourragère of the Military Medal to the 1st and 13th RMTA, 8th RMTT, 1st RMZT, 1st RMTM and 1st RMSM; the fourragère of the Cross of War to the 3rd, 5yh, 6th, 9th, 10th and 11th RMTA and 2nd RMTM. 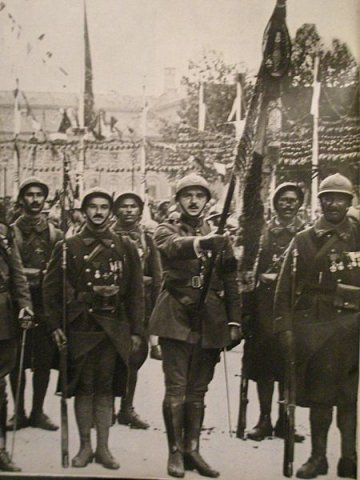 Paris, July 1919, during the victory celebrations: the flag of the 2nd RMTA, one of the most decorated regiments in the French army. The infantrymen in its guard of honour bear their individual medals. Source: R Merly. (Album of the war of 1914-1919. © L'illustration). 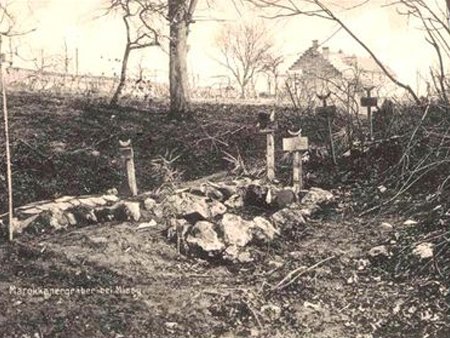 For Muslims, the temporary graves at the front, while basic, were decorated with wooden steles to distinguish them from Christian graves identified with Latin crosses. This differentiation of funeral emblems was instructed by a ministerial memo of 3 December 1914 specifying the rules to follow regarding the burial of Muslim soldiers: the shahada had to be pronounced, the body washed and rolled in a white cotton shroud, no coffin, with a stele pointing towards Mecca. 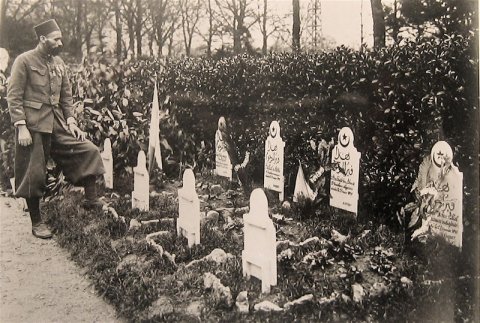 These Koranic precepts, impossible to respect with regard to war burials on the front line, were easier to observe immediately behind the front (at the Faubourg Pavé cemetery in Verdun, for example) and were wholly respected in the ”interior zone” (in Paris, the cemeteries in Ivry and Pantin, etc.) as these areas had the supervision of the Algérienne, the association whose members visited the wounded from Africa and delegated representatives to attend the funerals of soldiers who died in the numerous hospitals around the capital.
After the war, the Muslim graves were grouped together within the national cemeteries in special areas, such as in the cemetery in Douaumont, which holds 592 steles facing Mecca alongside 14,263 crosses.
In the 1930s, cement steles came to replace the wooden ones used previously. These steles were engraved with a star and a crescent above the inscription ”here lies” in Arabic. The identity of the deceased, his grade, unit and the words ”died for France” followed by the date the soldier died were inscribed on a rectangular plaque. 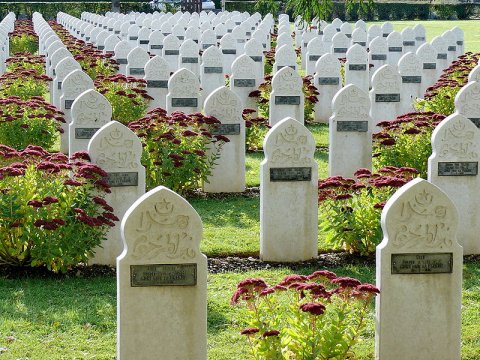 Muslim area in the national graveyard in Amiens (Saint-Acheul). In the foreground, the grave of a soldier in the 45th RTS who fell in the Battle of Somme. Source: Photo: Claude Villetaneuse

The North African soldiers are buried in a number of military cemeteries in France and in other countries, in perpetual graves maintained at the expense of France's Ministry of Defence. 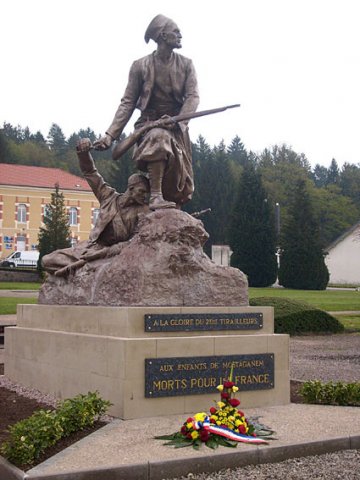 Monument to the men who died in Mostaganem, rebuilt on the military exercise place of the 1st Infantry Regiment in Epinal, in 2010. It features two Algerian infantrymen, the work of Maurice Favre. Source: Photo, Mostaganem veterans association.

The monuments to the dead and regimentary steles were erected in the post-war period to honour the dead or commemorate battles, such as the monument in Vimy (Pas-de-Calais), a tribute to remember the attack of 9 May 1915 led by the Moroccan Division under General Blondlat. 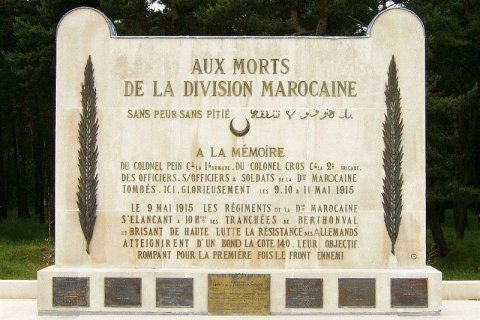 Vimy (Pas-de-Calais): Monument commemorating the battles led by the Moroccan Division from 9 to 11 May 1915. Source: Public domain.

A plaque in homage to the Muslim soldiers who died for France was inaugurated on 11 November 2010 at the Grande Mosquée in Paris. 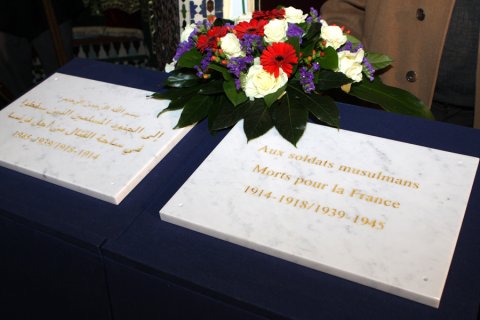 Commemorative plaque to the Muslim soldiers who died for France at the Grande Mosquée in Paris. Credit: Cch Chatard/DICoD

This memorial joins the commemorative monument dedicated to the Muslim fighters inaugurated in June 2006 in Douaumont (Meuse). 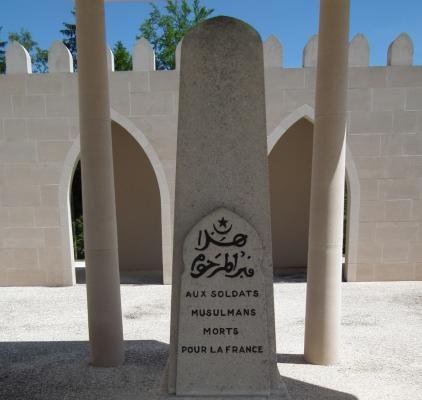 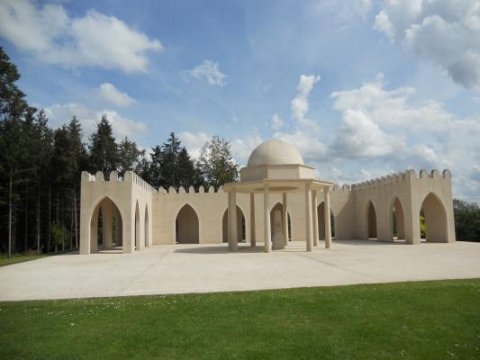