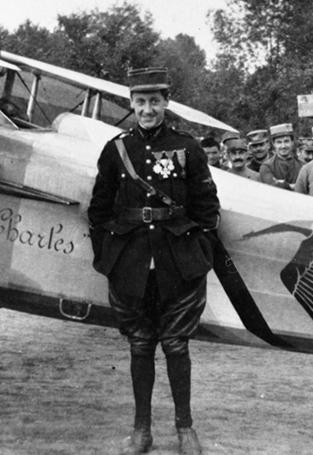 Georges Marie Guynemer was born in Paris on 24 November 1894. At the outbreak of war, he tried to join the infantry, then the cavalry, but on both occasions he was refused due to his weak physical constitution. He was finally accepted into the Air Force and gained his pilot's licence in March 1915. Flying with the Cigognes squadron, he soon proved himself to be a daring and extraordinarily skilled fighter pilot. He was cited and decorated many times. Having become a living legend, Captain Georges Guynemer disappeared during a mission ('high in a sky of glory' were the words used in the last citation relating to him), shot down somewhere over Poelkapelle in Belgium on 11 September 1917, while at the commands of his plane 'Vieux Charles'. His 53 officially recognised victories made him one of the 'Ace' fighter pilots of the French Air Force during the First World War.

His motto, 'Faire face' ('Face your Fears'), was adopted by the Air Force.