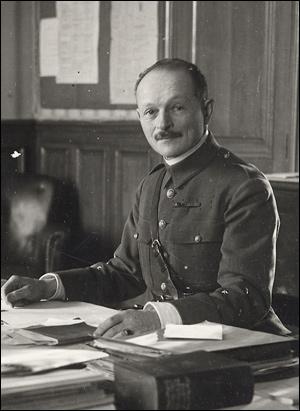 Maxime Weygand was born in Brussels of unknown parents. His origins continue to intrigue journalists and historians: was he the natural child of Countess Kosakowska, the illegitimate son of Léopold II of Belgium, the result of the union between Colonel Van der Smissen and Empress Charlotte of Mexico or of the latter with an Indian from Mexico? The file remains open. Entrusted at the age of six to David Cohen de Léon, a Jewish leather merchant from Marcheille, he took the name of the country of his tutor and, after an exemplary education at the Vanves, Louis-le-Grand and Henri-IV high schools, in 1885 he was admitted to Saint-Cyr as a foreign entrant under the name of Maxime de Nimal. Graduating in 1887, he chose the cavalry and was trained at Saumur before being sent to the 4th Dragoon Regiment. Aged twenty, he was officially adopted by his tutor's accountant, François Weygand, and was granted French nationality. He moved between garrison towns (Chambéry, Saint-Étienne, Lunéville, Saumur, Niort and Nancy) and received his Captain's stripes in 1896. Punished "for having taken, a stance that might have a political nature" in favour of Colonel Henry during the Dreyfus affair, he married in 1900 and pursued his career as an officer with the 9th Dragoon Regiment. As Lieutenant-Colonel in 1912, he was noticed for his qualities as an instructor at the Saumur Cavalry School and joined the Centre of higher military studies. He was promoted to the dignity of Chevalier of the Légion d'honneur in 1913.

In 1914 at the head of the 5th Regiment of Hussars, he took part in the Battle of Morhange. On the 28th August, promoted to Colonel, he was assigned to Foch, the Chief of Staff. Promoted to Brigade General in 1916, he remained faithful to Foch during his ostracism, putting himself in a favourable position to return to his side in 1917 following the failure of the Nivelle plan. At the Rapallo conference (6th and 7th November), he worked on the constitution of a higher inter-allied command, which became effective from the Doullens conference (26th March 1918) with the appointment of Foch at its head and Weygand in the role of Major General. The two men negotiated the terms of the armistice in November. In 1920, he was General of the army corps, carrying out a mission to Poland as military advisor to Marshal Pilsudski in his fight against Soviet Russia. In 1923, he rose to the rank of Army General, replacing Gouraud as High Commissioner in Syria. On returning to France, he was appointed to the Upper War Council and then to the management staff of the Centre of Higher Military Studies, writing the biographies of Foch (1929) and Turenne (1930). In 1931, Weygand succeeded Foch at the Académie Française, publishing a work about the 11th November (1932) and, on retiring from active management in 1935, he devoted himself to writing the military history of Méhémet-Ali and his sons (1936), Comment élever nos fils? (How should we raise our sons?) (1937), La France est-elle défendue? (Is France well defended?) (1937) and Histoire de l'armée française (History of the French Army) (1938).

On the outbreak of the Second World War President Daladier recalled him to command French troops in the Middle East with the title of Head of Theatre of Operations of the Eastern Mediterranean and the mission of coordinating the action of the men in the Levant and the Balkans. In May 1940, Reynaud, the President of the Council, recalled him to Paris to succeed General Gamelin in supreme command of the French army due to the crushing defeat of the French army in the East. He tried to establish a counter-offensive with the Belgian and British armies but the plan was abandoned on the 24th May, as Franco-British troops were surrounded at Dunkirk. The following day, during an extraordinary meeting at the Elysée, the possibility of an armistice was suggested. On the 11th June, during the Briare conference and in the light of Churchill's decision not to schedule any large-scale attacks on the front line by the Royal Air Force, the position of the French high command began to take shape: to carry on with the struggle in the empire or decide to request an armistice? Weygand and Pétain considered that the government could not leave French territory and that an armistice would preserve its military honour. The pace of events quickened? The flood of refugees, swelled by the army beating its retreat, compounded the general confusion. The government, which had moved to Bordeaux, still hesitated over the policy to adopt. On the 17th June, a consensus was reached through the vice-president of the Council, Camille Chautemps, and the request for an armistice was made to the German authorities. Pétain replaced Reynaud and Weygand was appointed Minister of National Defence. However, although he made sure that armament contracts between France and American manufacturers were transferred to benefit the British allies and that deliveries were redirected to British ports, he disapproved of General de Gaulle's attitude and demoted him to the rank of colonel, having him sentenced to death in his absence.

As a Minister and then General Representative of the Vichy government in Africa, Weygand tried to maintain the balance between the Allies, the demands of the Reich and his fidelity to the only government he believed to be legitimate: he refused to hand over the facilities in North Africa to Germany (July 1940 and May 1941), applied the legislation of Vichy, negotiated the conditions of supplies with the American Murphy (February 1941) and demanded that soldiers from the African army swear allegiance to the Marshal following the campaign to Syria. His behaviour embarrassed Berlin and the Vichy government recalled him to the mainland in November 1941. In November 1942, following the Anglo-American landing in North Africa and the total occupation of the mainland by German and Italian troops, Weygand was arrested by the Germans and placed under house arrest under the authority of the camp of Dachau.

Freed on the 5th May 1945, he was arrested two days later. Detained for acts of collaboration at Val-de-Grâce until May 1946, the case was dismissed in 1948.

Maxime Weygand died on the27th January 1965 of complications to a fractured femur. He was buried in the Saint-Charles cemetery in Morlaix, in Finistère.