Maurice Gamelin was the son of an officer and army controller general wounded at the Battle of Solferino in 1859 and a mother from the Alsace, the daughter of Quartermaster General Ulrich and the niece of the military Governor of Strasbourg in 1870. From an early age he showed an aptitude for military skills and matters. After winning the national prize for philosophy, he continued his studies at the Ecole du Louvre and then decided to take the entrance examination for Saint-Cyr. Admitted in October 1891, he graduated top of his year in 1893 to be appointed to the 3rd regiment of Algerian tirailleurs (infantrymen) and then to the Topographic Section in Tunisia. Between 1896 and 1899, the young officer used his drawing skills in the army's geographic department in Paris. Achieving eighth place in the Ecole de Guerre's competitive examination, he soon came to the attention of his teachers, notably Foch and Lanrezac. Promoted to captain in 1901 in the 15th battalion of foot chasseurs, the following year he joined General Joffre at his headquarters. In 1906 he published a philosophical study of the art of warfare, a work that elevated him into the ranks of great military thinkers of his time, although he was only the generalissimo's ordnance officer in the 6th infantry division. He remained at his side in the 2nd army corps (1908) and in the Upper War Council, before taking command of the 11th battalion of Alpine chasseurs (Annecy) for two years from 1911. Head of the Chief of staff's 3rd Bureau, he chose to join General Joffre once again in March 1914.
It was as head of his military office that Gamelin took part in the operations of the Great War. Confidant to the generalissimo and a well-informed tactician, he led the 2nd half-brigade of foot chasseurs along the Linge (Alsace) and in the Somme, drafted the 2nd order that was at the root of the victory of the Marne (25th August 1914) and wrote the 6th order which triggered its offensive. As temporary Brigade General in December 1916, he was posted to the 16th infantry division, before being recalled to Joffre's HQ at the beginning of 1917. When Joffre was replaced by Nivelle, he requested a command position. In April/May, he was given the 9th infantry division with whom he distinguished himself on the Argonne, at Verdun, in the Aisne, around Noyon in March 1918 and halted the advance of German troops along the Oise. Promoted to Brigade General in September 1919, he was sent as head of the French military mission to Brazil and in 1921 published "Trois étapes de l'avant-guerre" (The three stages of the pre-war period) (Les oeuvres libres, no.13).

On his return to France in 1925, the young Division General took command of the French troops in Syria as Deputy to the High Commissioner Jouvenel (September 1925 to February 1929), with the mission of repressing the Djebel Druze rebellion alongside General Sarrail, a duty that he carried out brilliantly and which earned him the honour of being elevated to the dignity of officer of the Légion d'honneur (16th September 1926) and his General's stripes in the army corps (November 1927). Posted to the 20th army corps in Nancy, he became the second in command to the General Chief of Staff of the army before replacing Weygand as General Chief of Staff of the army on the 9th February 1931. Awarded the Grand Croix of the Légion d'honneur on the 14th July 1932, he held the vice presidency of the Upper War Council (January 1935) and was decorated with the military medal (31st December 1935). As General Chief of Staff of the national defence (21st January 1938), he took command of the allied forces in France in September 1939. However, his tactical ideas were outdated: he refused to make large-scale use of armoured weapons and the air force, preferring a defensive strategy relying on the Maginot line and showed a tendency to delegate command on the front; the French army could only put up futile resistance - "we are all, more or less inevitably, men of a certain time and background, even when we try to react against some parts of it", he would write in his memoirs as if to justify himself. On the 19th May 1940, General Gamelin was relieved of his command and placed under arrest by the Vichy regime on the 6th September. Imprisoned at the fort in Portalet with Blum, Daladier, Mandel and Reynaud, he was tried on the 19th February 1942 in front of the high court in Riom, which he forced to adjourn (11th April) by refusing to take part in the proceedings - "the trial became in fact one of "lack of preparation"", he would note in his memoirs. On the occupation of the free zone by the Wehrmacht, the Generalissimo was imprisoned in Buchenwald in March 1943 and then in Itter, in the Austrian Tyrol, until his liberation by American troops on the 5th May 1945. Returning to Paris, Maurice Gamelin devoted himself to writing his volumes of "Servir" memoirs, published in 1946, which he completed in 1954 with the story of his experience of the Great War and the manoeuvre that led to the victory of the Marne. 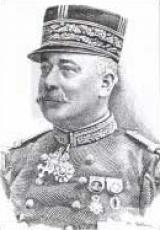