Remembering those executed at Bondues 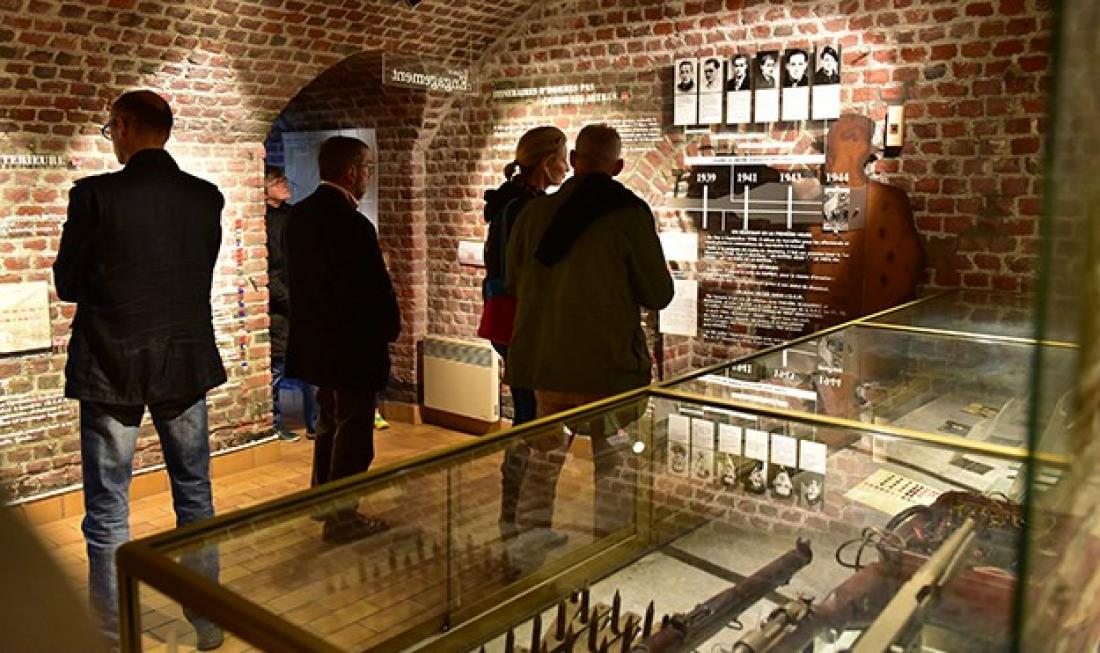 Hélène Priego is director of Bondues Resistance Museum, which opened in 1997. The museum has enriched the town’s stone heritage devoted to the memory of those who were executed at Bondues during the Second World War. Because that history is a key element of local identity, it is a source of distinctive commemorative practices, in Bondues and the surrounding area. Can you briefly tell us the story of those who were executed at the fort of Bondues?

Part of the defensive fortifications built around Lille in the late 19th century, the fort of Bondues was chosen by the occupier, along with two others, for the execution of those sentenced to death in the region between summer 1942 and summer 1944. A total of 68 executions were carried out here between 17 March 1943 and 1 May 1944.

Most of those executed were rounded up in three main waves of arrests: one in summer-autumn 1942, targeting intelligence and escape networks in the coastal sector; the second in July to December 1943, largely focused on the Organisation Civile et Militaire (OCM) movement and the Alliance network in the city of Lille, and also the Francs-Tireurs in Avesnois and the Nord-Pas-de-Calais coast; and a third in March 1944, which mainly targeted the OCM groups tasked with pinpointing German V1 flying bombs.

The executions at Bondues had two distinctive characteristics: first, the absence of hostages. Those executed here were all tried and sentenced to death for acts harmful to the occupier. Second, their heterogeneity, arising in large part from this successive dismantling of different groups. The result was a variety of profiles (social-professional background, age, etc.) and political affiliations.

How does this memory incorporated in the local landscape and has remembrance tourism developed around the history of the Bondues executions?

Those executed at the fort of Bondues soon entered the collective subconscious of their communes, beginning with the transferral of the bodies, often involving ceremonies that attracted large crowds. This was the case of the youngest of the executed, for example the group that operated in the Vieux-Condé area.

Shortly after Liberation, streets and squares were renamed in honour of local heroes. The town of Courrières, for instance, initially named the town hall square after General de Gaulle, but gave in to popular pressure to rename it Place Jean Tailliez, a more familiar figure and perhaps closer to local political sensibilities.

However, apart from a handful of discreet steles and gravestone inscriptions, the memory in stone of those executed is primarily to be found at Bondues itself. Thus, decades later, the site of their execution became their principal remembrance site, outside the family sphere.

It began as the site of a memorial, erected in 1964, then later, in 1986, came the restoration and unveiling of the execution site by two important figures, Marie-Madeleine Fourcade and Maurice Schumann. Then, in 1997, space was given to history and analysis, with the opening of a museum, concerned not only with the 68 individuals executed here, but more broadly with the Occupation and Resistance in the attached zone. So we can’t really talk about remembrance tourism directly associated with the Bondues executions, because their remembrance has become emblematic of that of all the Resistance fighters who died in this sector. Thus, the annual ceremony in September combines the private remembrance of the families present with a general tribute to the Resistance paid by those in attendance. What relationship to local residents have with this memory?

There is a broad consensus today that the Resistance is a subject to be commemorated, and the intergenerational interest increases year on year. With the deaths of the last remaining witnesses, many young adults are turning to historical and remembrance sites to delve deeper into their family history.

But the remembrance concept of “Resistance” is rarely embodied, other than in an occasional ancestor. Across the region and beyond, it is families who today have an intimate relationship with the memory of their executed family member. Documents have been carefully kept for generations, or donated to the Bondues museum, which is the guardian of that memory.

The exception to the rule is perhaps Abbé Bonpain, one of the first to be executed at the fort. Already a well-known figure in the Dunkirk area before the Occupation, his execution was met with instant indignation. It was announced on the BBC and local people organised a funeral service two weeks later, despite the German restrictions. After the war, he was remembered in a wide variety of ways, with a statue in his parish of Rosendaël, streets and squares named after him, not only on the coast, but also in the city of Lille, a stamp in the “Heroes of the Resistance” series, and even a dahlia created in his honour. Still today, his is the name that has the biggest impact on visitors to the museum.

Why is it important to preserve local commemorative practices concerning this memory, and how do they fit in with national commemorations?

Local commemorative practices must be preserved precisely because the museum is the guardian of the memory of the families of those who were executed, and must reflect that. Visitors who come and look at the plaques in memory of those executed often find names which they are used to seeing in their day-to-day lives, on street signs or war memorials. And all of a sudden, the name is given a face, a story, and takes on its full meaning. In this sense, these commemorative practices are an integral part of local identity. So much so, that the reading lists for the history of the Resistance and repression syllabus are not exactly the same in Dunkirk or Lyon.

The very basis of learning today is the inductive approach, the study of local cases. Situating the story of the executed – local history – in the “bigger” history does just that, by engaging with visitors.

What projects or initiatives are under way or in the pipeline to preserve and develop the memory of those executed at Bondues?

The memory of the executed was the starting point for the whole memorial and museum project at Bondues. Even so, we came to realise that, over time, the place of the executed tended to be dimmed by the museology. Their faces and names opened and closed the display, but they appeared little along the way.

When discussing the enlargement and reorganisation of the museum, we took this idea of the inductive approach as a basis for reintroducing the profiles of the executed at various points in the displays, like a central theme or so many invisible guides.

The expansion and reorganisation of the museum will begin at the end of 2020, with support from the Ministry of the Armed Forces.