The Union des Blessés de la Face et de la Tête was founded after World War I to help the more than 500,000 soldiers left injured to that part of the body, including 15,000 severely mutilated. A hundred years later and it is still carrying out its good work. The Union des Blessés de la Face et de la Tête (the association for the wounded to the face and head – UBFT) ), better known in France as the ‘Gueules Cassées’ (literally ‘broken faces’), was formed in 1921 by its three founders – Colonel Picot, Bienaimé Jourdain and Albert Jugon – to provide emotional and material support to their terribly disfigured comrades, some of whom refused to go out in public or were even rejected by their own family. Their hopeful motto was: ‘Keep smiling’!

From compensation to moral and social support

The primary mission of the association was to defend its members’ rights to compensation in the form of disability benefits and to provide social aid to its most disadvantaged members and their living partner. They provided support in the event of any financial difficulty stemming from their wounds, illness, home adaptations, schooling for their children, professional reintegration, death and so forth. The UBFT also came to the aid of its members’ widows as, very often, the wives were prevented from working in order to take care of their husbands. When a wounded serviceman died, the war disablement pension was reduced to a level not much above the poverty line meaning that the widow was unable to have a decent quality of life.

Keen since its inception to give as much assistance as possible to its members, the UBFT has continued to offer support to service people, both serving and veterans, as well as other associations, federations and foundations working to preserve the memory of contemporary conflicts. The association has also established several centres, institutes and medical centres such as the neurological department at Val-de-Grâce Hospital and the Memory and Alzheimer’s Disease Institute in Paris. The UBFT also supports numerous health facilities and institutions including the Orphelinat Mutualiste de la Police Nationale (police orphans fund), Association Tournesol (art therapy), military training hospitals, the CABAT (support unit for army service people), the Institution Nationale des Invalides (national disabled institution), the Rencontres Militaires Blessures et Sport (sports and activities for injured service people), the Brigade de Sapeurs-Pompiers de Paris (the Paris fire service) and many more. It has also established a community network of thirty delegates and flag-bearers who are geographically close to the members to respond more swiftly in the event of an emergency. Its social aid budget is over 2.5 million euro a year.

Supporting the new generation of war-wounded

The UBFT has taken care of those wounded to the face and head from all the conflicts in which the French army has been engaged, from World War I to the Algerian War. Now it is open to the wounded serving in France’s current armed forces, in particular those returning from field operations and, more broadly, service people who were injured to the face or head during peacekeeping missions or while protecting people or property. Maxillofacial and reconstructive surgery has made leaps and bounds in terms of progress, above all thanks to the patronage provided by the foundation set up in 2002 by the UBFT to fund medical research into cranio-maxillofacial trauma, so that today’s ‘broken faces’ receive cutting-edge treatment. These medical advances provide for faster reconstruction resulting in faces that appear almost unharmed and no longer attract inquisitive looks. However, the injury is still there. It is internal, beneath the skin and we are duty bound to help these men and women living with psychological injuries that can lead to severe problems with their families or in their work or home lives.

Unlike other associations supporting service people whose members are falling, we receive over 150 new members every year. These are mostly young people who are largely affected by war post-traumatic stress disorder, an invisible mental trauma. For our association, the average age is on the decline. Defending the right to compensation and providing emotional and social support remain our priority. Our founders well and truly understood the need for psychological support for gravely disabled service men and women with severe disfigurement. 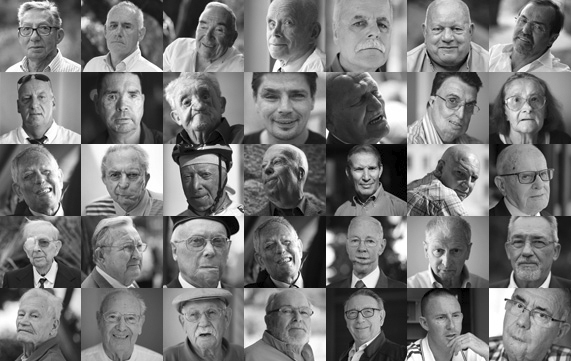 2021 is a milestone year for the association and the foundation which are celebrating their 100th and 20th anniversaries respectively. For the last few months, the UBFT has been sharing a series of posts about its history and latest news on social media including Facebook, Twitter, Instagram, LinkedIn, YouTube and Vimeo. Totalling 20 episodes each of between three and six minutes long, they are divided into two seasons. The first season, mainly focusing on the historical aspect, came to an end in mid-June while the second season started in early September. The organisation’s history having largely been covered in the first 10 episodes, the second season focuses on more recent times, the war-wounded and the missions undertaken today as well as the outreach work of the Gueules Cassées Foundation. While the target audience is of course the war-wounded, the medical corps and institutions, the series is also addressed at the wider public such as teachers and students. It also shines a light on the modern actions of the Gueules Cassées from the angle of its involvement in research as well as its engagement in the military world, working at the front of field operations carrying out peacekeeping.

The Gueules Cassées Foundation is a registered charity and supports a number of researchers through an annual call for proposals. It does sterling work in making major innovative advances possible in the field of cranio-maxillofacial research. Since it was established 20 years ago, 697 research and innovation equipment projects have been funded for a total spend of 22 million euro. After realising, from its outset, that it could help in the area of reconstructing the cranial cavity, the Gueules Cassées decided to expand its research scope to brain injuries, including post-traumatic disorders and degenerative diseases. Pioneers throughout its history, the Gueules Cassées continues to lead the way. After supporting maxillofacial, plastic and reconstructive surgery dealing with the visible and external consequences of trauma, the Foundation is now taking strides to explore internal sensory disorders resulting from brain trauma or neurodegenerative disease. What the Gueules Cassées Foundation is most proud of is the indefatigable support it has given through the years that has made possible real progress and earned it an international reputation through various other associations. A brightly promising future ahead for the association still.