The submarine base of Lorient

The submarine base of Lorient; Source ECPAD

Stretched out over a surface of 26 hectares, southwards from the city of Lorient, the ancient submarine base Kéroman is established in the middle of the roadstead, in front of the Port-Louis citadel and the Island of Saint-Michel...

Stretched out over a surface of 26 hectares, southwards from the city of Lorient, the ancient submarine base Kéroman is established in the middle of the roadstead, in front of the Port-Luois citadel and the Island of Saint-Michel

From the summer of 1940 and the German victory in the west, the Kriegesmarine fits out bases in the Netherlands, Belgium and France. The Lorient arsenal is chosen by Admiral Karl Dönitz to accommodate one of the five huge bases installed on the French coasts of the Atlantic to protect the U-Boote. From June 21st 1940, the first day the city was occupied, work commenced to free the docks, in order to allow the submarines to enter the Lorient port on July 7th. In spite of the reinforcement of the site from the Kriegesmarine, the German headquarter quickly realised, that these installations are not suitable enough for the conduct of the Atlantic war and thus decides to build a concrete unit constituting a real underwater base, more suited to resist the violence of the allied shelling. Under fire from the planes of the Royal Air Force, 15 000 workers build between February 1941 and January 1943 three huge concreted blocks, with amazing dimensions: the flank measures 130m and 18.5 m high for the blocks Kéroman I (KI) znd Kéroman II (K II), with roofs measuring 3.5 m thickness; the Kéroman III (KIII) block is 170m long, 122 m large and has a roof thickness of 7,5,m. The new Kéroman underwater base can resist to the classic shells, then the most powerful of that period, and is able to shelter more the 25 submarines thanks to installations exposed directly to the sea. It has the capacity to hoist the most impressive submarines, in protected cells thanks to a slipway. The presence of this base considered indestructible is the reason that Lorient suffered massive bombardments from the allies' aviation, which transformed the city into a vast field of ruins. Since the concrete protection was never really damaged during the war, the French national navy has used the Kéroman site since 1945. They installed a fleet of submarines, an annexation of the Lorient arsenal (DCN), as well as a zone, where the submariners can live.
July 6th 1946 the Kéroman bases were baptised with this name by Jacques Stosskopf, section chief of the new constructions in the Lorient arsenal. He will later on be deported and executed by the Nazis, accusing him to have transmitted precious information about the strategic activity of the base to the resistance network, during the entire occupation period. In 1995, the ministry of defence announces, in the framework of its reorganization plan, the abandonment of the site that will become effective in February 1997, with the departure from Kéroman of the last submarine "La Sirène".
The visit of the Kéromann III block Now days only Kéroman III block is open to the public to visit. The other sectors of the base are inactive or occupied by factories. A guided path of approximately an hour and a half gives to the visitor the chance to discover the greatest buildings built in Lorient, measuring 24000 m2 . They can also climb the roof constituting a splendid view-point dominating the roadstead of Lorient and its harbours. In the south east of the base, the block contains seven cells, who's most important is 103 m long and 22,5 m large and offers two sites. In 1944 its construction remained unfinished, since the block was under continuous bombardment during the whole time of its construction. Individuals can visit the site during the school holidays, and groups may visit the site during the whole year on reservation. The opening dates are available at the tourist office of Lorient.
Flanking the walls of the base, the Davis Tower was built in 1942 for the submarines training. In 1953 the national navy restores it back into service. From 1999 it resurfaces thanks to a museographic space dedicated to the immersed inheritance of Lorient. Equipped with a decompression chamber simulating the living conditions of the crews, the museum gives to the visitor the chance to plunge back into the past and discover the wrecks of this region. Open every Sunday from 2:00 p.m. to 6:00 p.m. During July and August, open every day from 1:30 p.m. to 6:30 p.m. Count approximately an hour of visit.
Recently purchaser of this site, having at its disposal more than 1200 m of cost line, the community of agglomeration of Lorrient, controls a conversion project of the base centred on the major topic: "The man and the sea during the XXI century". The installation of several companies in the old concrete blocks, that sheltered the submarines, contributed to the development of a strong activity in the water sports sector. In the long term, the opening of a company-village, based on the maritime, advanced technology industry is envisaged. By the year 2005 the inauguration of the Tabarly Academy will take place. This area pays tribute to the memory of the missing sailors, with a media library, by organising exhibitions and by giving information on the topics of the oceanic races. The opening to the public of the "Flora" submarine, that was in service from 1964 until its disarmament in 1989 in Kéroman is forecasted. A first phase of works is considered, in order to repair the submarine, the boat ramp which supports it and the transporter bridge between the K I block and the K II block. After the renovation is completed, footbridges will make it possible to reach a museographic space, dedicated to the submarine base of Kéroman and exhibiting the every day life on board of the submarines.
Base Submarine Peninsula Keroman 56100 Lorient Phone: 02 97 02 23 29 Rate : Full price: 6 €, reduced 3 €, free for children under 12 years Hours : [list] Outside school holidays: Every Sunday at 15 pm [list] School holidays: daily at 15 am on Saturday. [list] Closed December 25 and 31 and the entire month of January Tourist office of Lorient email :contact@lorient-tourisme.com 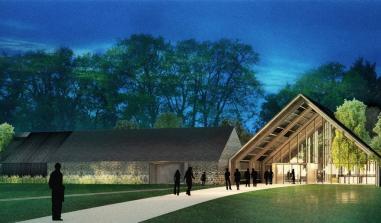