Nearly surrounded and under pressure from all sides, two German armies organised their retreat during the Battle of the Falaise Pocket.

For the Americans, as well as for the Canadians, French and English, there was just one goal: Chambois. The Americans of the 90th Infantry Division, with the support of France's 2nd Armoured Division, came within six kilometres of this little town when they ran into a problem: the village of Bourg-Saint-Léonard. One of the most seasoned Waffen SS regiments had also received orders to take it.
In the pocket, the German strategy consisted in placing tanks along the southern edge via Argentan, facing the Americans. A strong defensive barrier was also set up at Falaise against the Canadians, with the 21st Panzerdivision and the 12th SS Panzerdivision. With this, and with their fierce resistance, the Germans managed to keep the two jaws of the Allied pincers apart to enable part of their forces to escape. They saved their tanks, but left most of their infantrymen to fend for themselves. 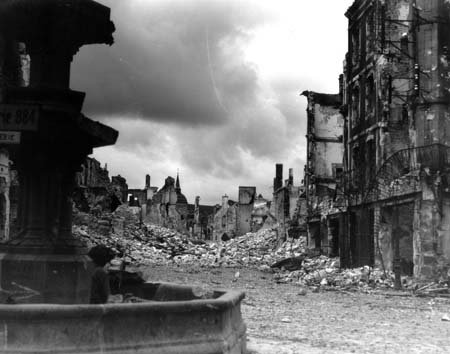 On 16 August 1944, Falaise fell to the Canadians. The same day, the Americans reached Dreux. General von Klüge received authorisation from Hitler to pull back. Until 17 August, the retreat to the east went smoothly through the opening; but order turned into a rout that day. 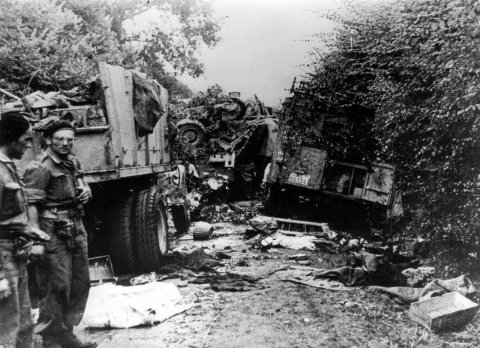 Polish tank crew of the 1st Armoured Division in the chaos of the German retreat. Source: Polish Government Ministry of Information Photo Service

To the North, the 1st Canadian Army took Trun on 18 August, while to the south, the 5th Corps reached Chambois. During the morning of 19 August, the 4th Canadian Armoured Division entered Saint-Lambert-sur-Dives. 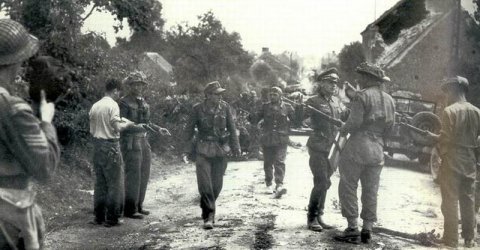 The pocket shrank every day under the American, Canadian, British and French divisions' attacks and the incessant aerial bombings. The Germans resisted. The pocket became a furnace, a veritable ”cauldron” that the last German units tried to extricate themselves from on 19 and 20 August. 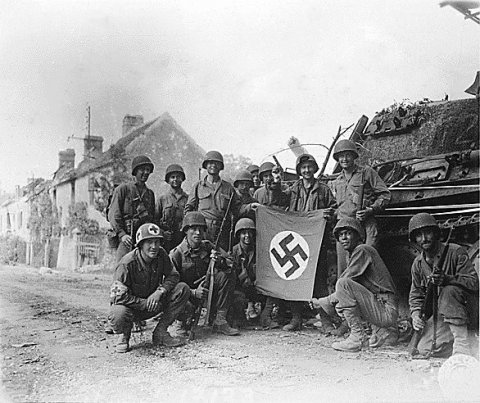 Group of American infantrymen in front of a German tank destroyed at Chambois, 20 August 1944. Source: US Archiv ARCWEB

On 19 August, the corridor was closed when the Canadians and Poles from Falaise and the Americans and French from the south and Alençon met up. On the 20th, some isolated units managed to escape during a counterattack carried out from the outside by parts of the 2nd and 9th SS Armoured Divisions. But the Chambois pocket was closed and the Battle of Normandy ended with an Allied victory. 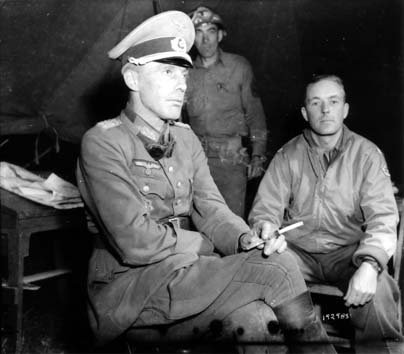 General Otto Elfeldt, commander of the German 84th Army Corps, was the only prisoner of his rank captured by the Allies in the pocket. Source: USA Historical Service - NARA 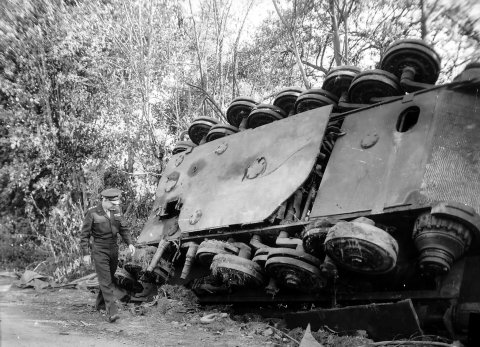 The French civilian victims of the Battle of Normandy

Unlike World War I, World War II was particularly deadly for the civilian population. In France, nearly 400,000 civilians were killed between 1939 and 1945.
Starting in 1943, the Allies carried out strategic bombings of German facilities in France, factories working for the Nazi war effort, etc. Thousands of victims were counted among the population. 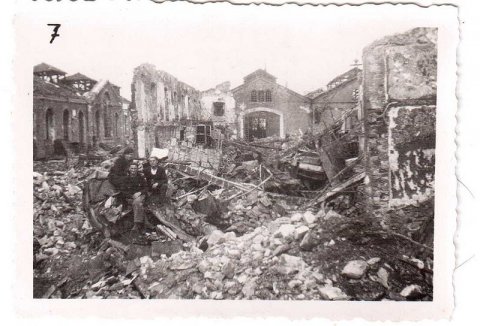 SNCF storage area-workshop destroyed on 9 June 1944... but also a great deal of ”collateral damage” for the people of Rennes - photo by Robert Caillard

After 6 June 1944, the bombing of strategic locations in Normandy intensified. During the night of 5 to 6 June, the aerial and naval bombings systematically hit the main crossroads to keep German reinforcements from reaching the beaches. During the Battle of Normandy, the civilian populations suffered in the bombing of cities, roads, port facilities, airfields, etc., and the deadly fighting of a battle that lasted more than 2 months, from 6 June to 19 August 1944. The civilians in Normandy paid a heavy price during the fight for Liberation.
In a few days, Caen, Lisieux, Pont-l'Evêque, Vire, Falaise, Avranches, Valognes, Alençon, Argentan and Flers were reduced to piles of rubble. The martyrdom of Normandy didn't end until early September with the destruction of Le Havre, crushed under 12,000 tonnes of bombs. 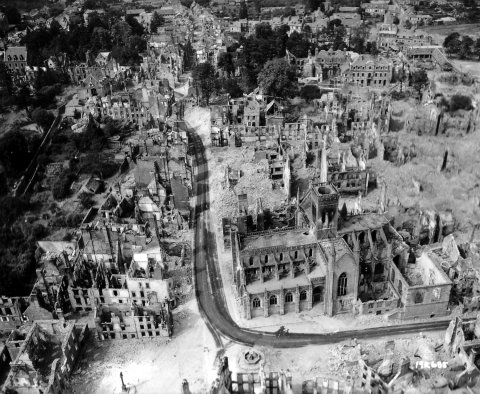 Aerial view of the city of Vire after the bombings of 6 June 1944, Notre Dame Church is the only building left standing in the middle of the ruins. Source: Basse-Normandie Regional Council / National Archives of Canada

In all, nearly 20,000 Normandy civilians perished in the fighting, especially under the bombs, and 300,000 others suffered losses. But the victims and the destruction related to the landing and the Liberation fighting also affected the Loire Valley (Nantes, Tours), the Brittany coast (Brest, Lorient, Saint-Nazaire), the Atlantic coasts - notably Royan - and the North of France (Lille, Amiens, Dunkerque). 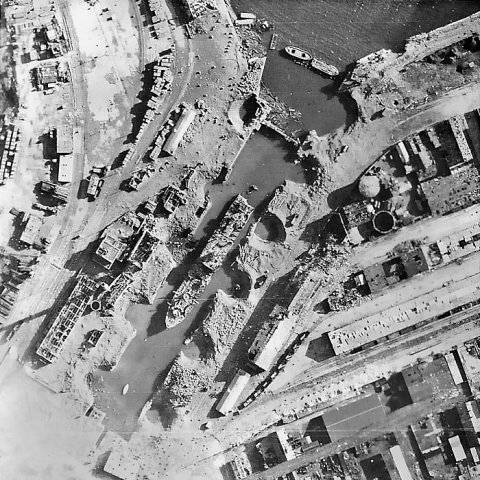 During the Battle of Normandy, the cities of Le Havre (1,770 civilians killed), Caen (1,741), Rouen (883) Saint-Lô (400) and Falaise (350) particularly suffered, but proportionally it was the small town of Evrecy in the Calvados department, with 62 dead for 460 inhabitants, that was hardest hit.

Memorial to the Civilian Victims in Normandy

The City of Falaise, in the Calvados department, and its famous Pocket, a major centre of the Battle of Normandy and the German Army's resistance, will welcome a ”memorial museum” highlighting and enriching the area's tourism resources so that the fighting at Falaise is not forgotten.
As part of an approach to attract tourists to the memorial sites in Falaise, and after the closing of the August 44 Museum, this ”memorial museum” project is being carried out jointly by the local elected authorities and the Caen Memorial. With its moral and scientific authority, the Caen Memorial will accompany all the operations to be organised around two distinct projects:
- a museographic space dedicated to the military operations deployed in the Falaise region;
- a memorial honouring the memory and suffering endured by the Normandy civilians.
This ”memorial museum” will be housed in the former courthouse in Falaise, unoccupied since the reorganisation of the map of the French legal system. It is a logical choice, but also a geographical (with William the Conqueror's castle nearby) and historical choice, since the Palais de Justice (courthouse) is symbolic of the reconstruction efforts immediately after the war. 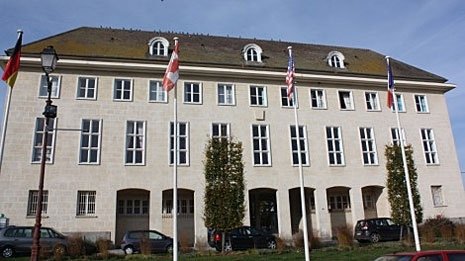 The Museum is scheduled to open in 2015.